To try or not to try: This was my dilemma when Harley-Davidson announced that media participants of the Triple S riding event in Andalusia, Spain, would be given a chance to experience a hill climb on a fleet of specially modified HD Street 750 units.

Motorcycle hill-climb competitions enjoy a huge following in the United States, which we all know is the birthplace of Harley-Davidson. Here in the Philippines, this extreme form of motorsport has yet to really gain traction. Considering the risks involved, HD’s event organizer made it clear that participation in the activity was not mandatory. So, while we were still at the hotel, I decided to pass.

Curious about how the Street 750 was modified for hill climbing? First, the traditional telescopic fork was replaced with a longer, inverted-type unit from the HD Street Rod. Next, a new sprocket was fitted in, as well as knobby tires—same size as the standard spec for the front, and bigger in the rear—and Öhlins rear suspension to boost the bike’s climbing capability. The gauges were also removed; the only way to check the revs was through your personal feel of the bike or by listening to the engine roar. 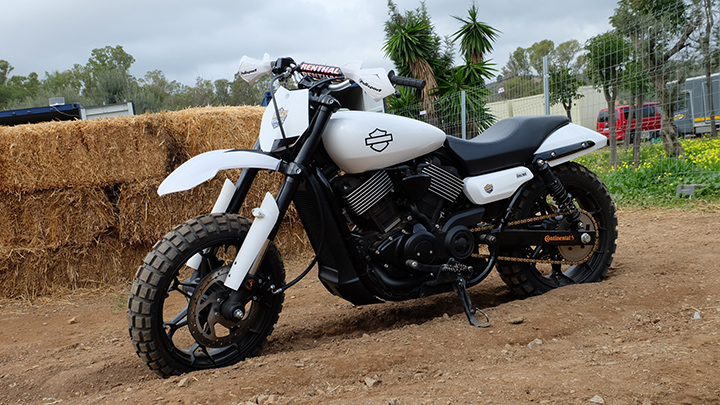 And to make the Street 750 look like a real hill-climb weapon, it received a neat white finish on its tank, front and rear fenders, and fork protectors. How’s this for cramming: The HD team took only five days to complete the modification work. To my understanding, the hilll-climb units were built purely for experimental purposes, and we turned out to be the guinea pigs that would ride them.

Just looking at the steep slope, the loose soil, and my colleagues anxiously waiting to see who would complete the course and who would crash, I thought the challenge seemed like a suicide mission. Bigger than the fear of possibly damaging the bike or injuring myself, though, was the fear of going home with a bruised ego.

“Do not worry about the bike—it’s just a piece of metal and we’ve got lots of them,” a marshal told us. “Remember, this is all about fun.” 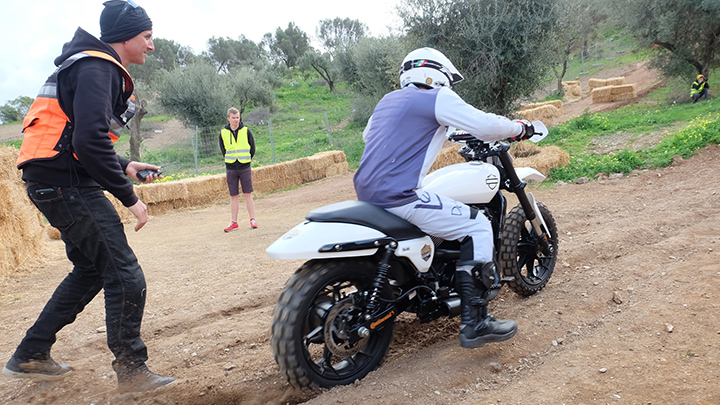 After hearing that sweet, assuring line, I suddenly changed my mind—I decided to go for it.

It was my first time to try hill climbing. I tried to stay calm by doing some deep-breathing exercises, telling myself that I was going to survive the short but treacherous uphill battle. Trusting the 58hp, 229kg bike was also key to nailing the challenge.

The game plan was simple: The rider had to wait for a tap on his shoulder signaling that he was clear for take-off. The wheelspin caused by previous take-offs had dugged a shallow ridge at the starting point, allowing me to plant my feet fully on the ground and prepare for the ultimate attack.

Three...two...one! I revved to the max while keeping the Street 750 in a straight line toward the target area. Loose soil and scattered rocks caused the bike twitch intermittently, but a little correction on the throttle application instantly solved the problem. With its enormous power, the bike rocketed up the hilltop in just a few seconds. 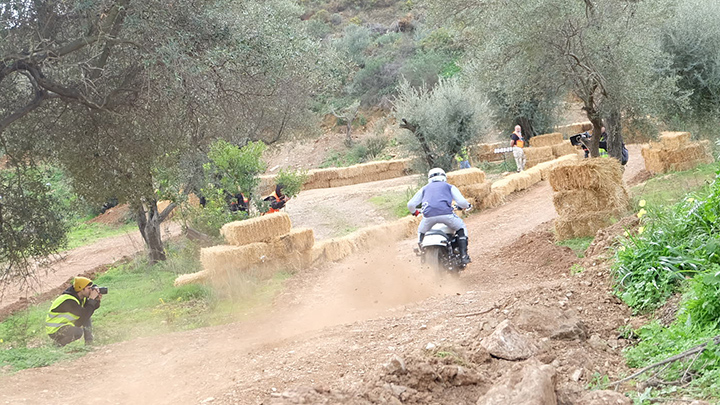 Now, I had to make s decision: Shut the throttle when I reach the top before turning to the finish line? Or rev high continuously to be able to sustain the power distribution to the rear wheel by controlling the pressure on the clutch lever?

On the first run, I did the latter and was able to survive the climb. On the second, I closed the throttle completely, causing the Street 750 to drop on its side while I was executing a slow turn to the small tabletop. Luckily, I was able to eject myself from the bike, preventing my leg from being pinned underneath its charcoal-hot V-twin mill. 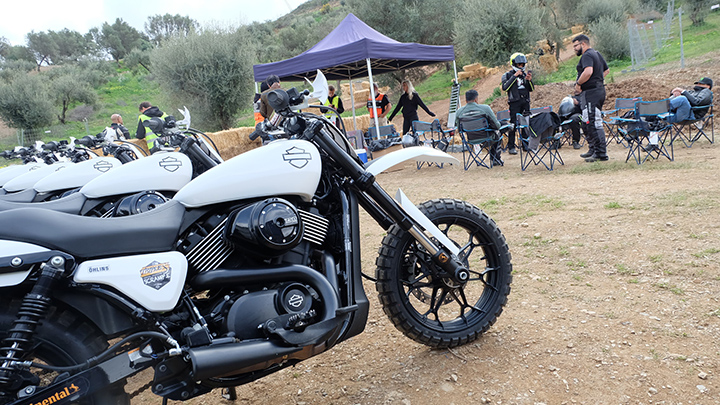 The marshals quickly righted the bike. After making sure I was unscathed, they allowed me to get back on Street 750 and roll it down the slope, in between the haystacks that served as safety barriers, and back toward the starting grid.

I envy my colleague, Kyongnam Na from Korea, for riding the modified Street 750 up and down the hill several times with so much ease, as if he was just on his way to buy a cigarette at a nearby store. The same goes for the guys from India—one of them even broke the record set by the other media groups.

Here are two things I learned from the challenge: 1) The worst thing one can do is not to try; and, 2) hesitation is the root of all failures. Do you believe so, too? 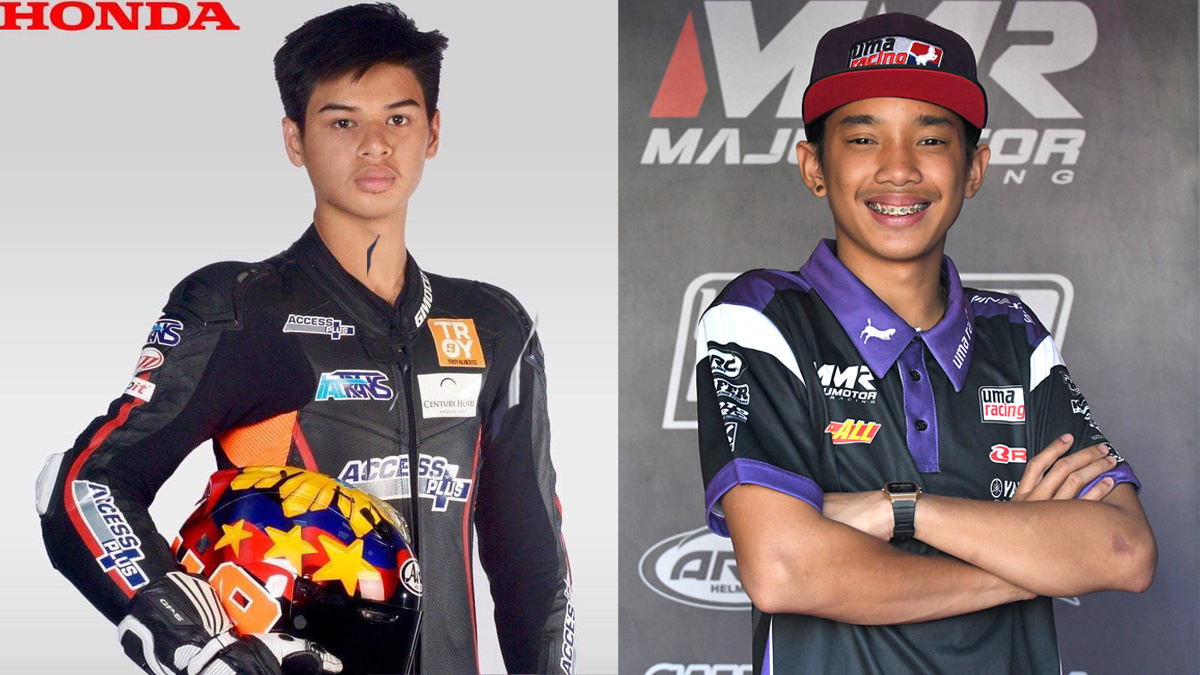 Team Honda vs. Team Yamaha: Alberto, Paz face off in 2020 season of ARRC
View other articles about:
Recommended Videos
Read the Story →
This article originally appeared on Topgear.com. Minor edits have been made by the TopGear.com.ph editors.
Share:
Retake this Poll
Quiz Results
Share:
Take this Quiz Again
TGP Rating:
/20