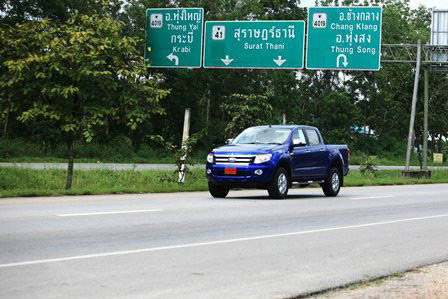 The all-new Ford Ranger apparently isn't just one strong and tough pickup truck, it's fuel efficient as well. This was proven by Ford Thailand in a test drive that was independently observed and verified by a respected academic from King Mongkut's University of Technology.

Using two Ford Rangers--an open-cab 2.2-liter XLT 4x2 and a double-cab 2.2 XLT Hi-rider model that are both equipped with a six-speed manual transmission--driven by four members of Thailand's motoring media, the trucks were driven from Bangkok to the town of Pattalung in southern Thailand and then back to Bangkok.

With Saiprasit Koetniyom, a respected professor from the Sirindhorn Thai-German Graduate School of Engineering at King Mongkut's University of Technology, overseeing the entire test drive, the gas tank of the two all-new Rangers were sealed shut in Bangkok at the start of the trip. The trucks' air-conditioning system was also set at the second lowest fan speed and sealed for the duration of the drive. The tire pressure was set at eco-mode as stated in the user manual. The participants were also required to drive at a minimum average speed of 70kph in a route that involved public highways and city streets in downtown Suratthani and Chomporn provinces.

At the end of the drive, the open-cab Ranger 2.2L XLT 4x2 covered 1,673 kilometers on a single tank of diesel or ran an exceptional average of 19.47 kilometers-per-liter fuel mileage.

"The results of our independent test drive have confirmed, without question, the all-new Ford Ranger as a class leader of fuel economy in Thailand," said Saroj Kiatfuengfoo, Ford Thailand's vice president of marketing, sales and service. "A key part of our product-led transformation under One Ford is to introduce vehicles that are class-leaders in fuel efficiency."

Will Honda sell its flooded cars in Thailand as brand-new units?
View other articles about:
Read the Story →
This article originally appeared on Topgear.com. Minor edits have been made by the TopGear.com.ph editors.
Share:
Retake this Poll
Quiz Results
Share:
Take this Quiz Again
TGP Rating:
/20