Such a big loss to the Blue Oval team
by Vernon B. Sarne | Jul 7, 2011
CAR BRANDS IN THIS ARTICLE 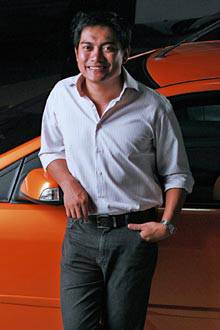 Another high-ranking executive of Ford Group Philippines has left the resurgent carmaker to join the Philippine distributor of BMW. Glen Dasig, who had worked for Ford since 1999, handed in his resignation today to move to Asian Carmakers Corporation, whose newly installed president, Maricar Cristobal-Parco, is also a former Ford executive. ACC has requested that Dasig's new position be withheld first, although anyone familiar with his background at Ford should have a fairly good idea.

Dasig joined Ford in August 1999 as dealer operations manager after stints at 3M Philippines and Citibank. A year later, he was appointed regional operations manager of Ford Asia Pacific's customer service operations. In 2002, he became FGP's finance controller, a position he held for two and a half years.

From March 2005 to December 2006, Dasig was expatriated to Thailand as finance controller and strategy manager of Ford Asia Pacific and Africa. When he returned to FGP in January 2007, he headed the company's marketing department for Ford passenger cars and North American-built units.

In March 2008, FGP named Dasig its national sales manager for the Ford brand. It was during his term as Ford's sales manager--a post he held until December 2010--that the brand's sales performance began to take off. Why FGP moved him to the Mazda brand in January this year is still a puzzle to us. Dasig's last post at FGP was as marketing and sales director for Mazda.

Dasig is also just the latest Ford executive to transfer to BMW. Aside from him and Parco, ACC's manager for its Motorrad division, Gil Balderas, came from FGP, as well as BMW Indonesia sales director Sunny Medalla.

Dasig had been the subject of unfounded rumors in the motoring beat. One story that floated around and refused to go away alleged that Dasig had been forced to take a diminished role at FGP. Of course, none of this was true.

If there's one thing we can say about this development, it's that Dasig is a huge loss to Ford and certainly a great gain to BMW. This, without a doubt, is Parco's best move so far since becoming ACC president.

Goodyear, AAP team up to establish Goodyear Autocare
View other articles about:
Recommended Videos
Read the Story →
This article originally appeared on Topgear.com. Minor edits have been made by the TopGear.com.ph editors.
Share:
Retake this Poll
Quiz Results
Share:
Take this Quiz Again
TGP Rating:
/20