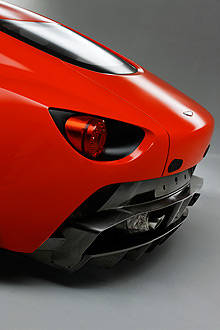 Based on the V12 Vantage, the production V12 Zagato will have a handcrafted aluminum and carbon-fiber body, and will be produced at Aston Martin's global headquarters at Gaydon in Warwickshire, England, in 2012.

"Such style, exclusivity and fastidious craftsmanship ensures it will be one of the most highly coveted models in Aston Martin’s 98-year history," said Aston Martin's chief executive Ulrich Bez. "A fabulous celebration of the iconic DB4GT Zagato, which celebrates its 50th anniversary this year, the V12 Zagato is the perfect inspiration for the next 50 years of Aston Martin."

Underneath the bonnet of the production car will be the same 6.0-liter V12 engine with an output of 510hp and 570Nm of torque that powered the two V12 Zagato endurance race car concepts to cover more than 230 laps and nearly 6,000 kilometers at the 2011 Nürburgring 24 Hour last June 25 and 26.

"The V12 Zagato is an elegant yet brutal design which reflects the great balance between race performance and pure Aston Martin style," said Marek Reichman, Aston Martin's director of design. "The original DB4GT Zagato was a true icon, powerful and graceful; the new design is a true representation of the spirit of DB4GT Zagato. The muscular organic forms define the thoroughbred nature of the car's racing credentials."