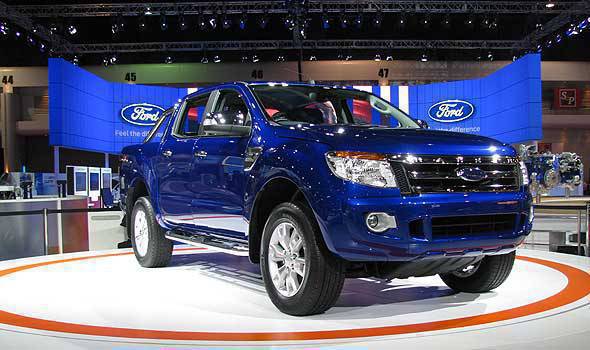 Bangkok, Thailand--The all-new Ford Ranger has finally been unveiled at the Bangkok International Motor Show in Thailand where, besides South Africa and Argentina, it will be officially assembled before it goes on sale later this year.

"We're leveraging this year's Bangkok Motor Show as an international stage for the ASEAN reveal of the all-new Ford Ranger global pickup, which will be built right here in Thailand," said Peter Fleet, president of Ford ASEAN. "We've taken the opportunity to create a world-class display on the Ford stand so that Show attendees can experience and truly understand our commitment to Thailand and the ASEAN region."

To really whet the appetite of those who are anticipating the arrival of the all-new Ranger in Ford showrooms, the American carmaker has set up a number of interactive displays demonstrating the pickup truck's top-level performance.

If you've seen the video where the Ford Ranger pulls a 160-ton steam locomotive, Ford will let you test just how much humans can pull with the Ranger Towing Game. Visitors can also test their personal torque performance and see how they measure up against the all-new Ranger at the Ranger Torque and Power Touch Table.

Now, don't you wish you're in Bangkok to try out these things? Or perhaps you should start convincing Ford Group Philippines to bring in all these fun stuff when it launches the Ford Ranger here.

Joe Hinrichs, president of Ford Asia Pacific and Africa, said via live chat on the Ford Ranger's Facebook page that the pickup truck will arrive next year.

"Philippines will be getting the all-new Ranger early 2012, following the ASEAN launch," Hinrichs said.