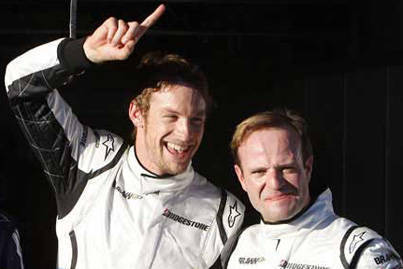 Just a little less than a month ago, Brawn GP - then known as Honda Racing F1 - was on the verge of extinction in the world of Formula One.

Honda was looking to unload themselves of the team due to the global recession, prompting team bosses Ross Brawn and Nick Fry to try and find a buyer. In the end, and with the 2009 season drawing closer, a management buy-out led by Brawn resulted in the re-christening of the team as ‘Brawn GP.'

Fast forward to the closing of the Australian Grand Prix: Brawn GP, after almost failing to join F1 this year, celebrates its first victory with Jenson Button leading the entire race with teammate Rubens Barrichello taking second ahead of McLaren's Lewis Hamilton. It may be recalled that the last time an F1 team won its debut race was in 1977 with Wolf Racing at the Argentine Grand Prix.

As expected, the race saw a collision at the tight first corner as Barrichello on the inside line struck BMW's Nick Heidfeld at the side, pushing him out onto Red Bull's Mark Webber path. This pushed Heikki Kovalainen out of the race while all three still managed to continue on, but not without a stop at the pit after various states of damages.

Long-time Bridgestone tires user, Ferrari, seemed to have failed to see just how quickly the brand's soft tires lose their advantage in a race. By the eighth lap, Felipe Massa and Kimi Raikkonen were four seconds off Button's pace. The gap widened to six seconds by Lap 12, prompting Raikkonen, Massa, Hamilton and BMW's Robert Kubica to dive for the pits for a fresh change of tires with just ten to twelve laps down.

Like in previous races, a Safety Car instance only served to make a mess of the whole order of things as William's Kazuki Nakajima's crash on Lap 18 promoted Massa, Kubica and Raikkonen up the leaderboard. Luckily for Button and Barichello, the Safety Car wasn't dispatched right away, giving them enough time to dive into the pit lane before lining up behind the Safety Car on Lap 19, thus preserving their positions.

Throughout the entire race, Button was unstoppable as Red Bull's Sebastian Vettel shadowed him closely while Kubica put down a few Fastest Laps of the race. Following the subsequent retirements of the two Ferraris of Raikkonen and Massa, Barrichello had fewer drivers to deal with up front while further back, Toyota's Jarno Trulli and Hamilton consistently fought for the few remaining points.

The one race incident so close to the flag that broke both Vettel and Kubica's chances of finishing on the podium was the former's crash into the latter on Turn 3. If Kubica gave Vettel more room to maneuver, he probably would've escaped unscathed. After all, he had the line but not the room to maneuver, leaving him nowhere else to go but on to Kubica's BMW. Frustration was evident on both drivers as they both stepped on it as though their front wings were still there when the reality is that, with the loss of downforce, both drivers just crashed into the wall.

With just two more laps remaining, it was a given that the race would end on a Safety Car period. With William's Nico Rosberg tumbling down the order earlier in the race, Barrichello was in the right place at the right time as he helped cap Brawn GP's maiden win with the team's first 1-2 finish.

Trulli finished the race in P3, earning him - and Toyota - a podium finish. But with the timing screen after the Vettel/Kubica incident showing Hamilton in P3, the race stewards decided that Trulli gained his spot by overtaking Hamilton during the Safety Car period. The Toyota driver was slapped with a 25-second penalty, dropping him down the board to 12th, and effectively handing over P3 to Hamilton.

As expected, McLaren's claim of a ‘performance shortfall' was all sandbagging based on Hamilton's pace throughout the entire race. For Ferrari, it was a race to forget as the team hardly showed any signs that they were last year's constructor's champion - clearly showing that the new car regulations has quickly made a level playing field for everyone. But for Brawn, this will be a day long remembered.