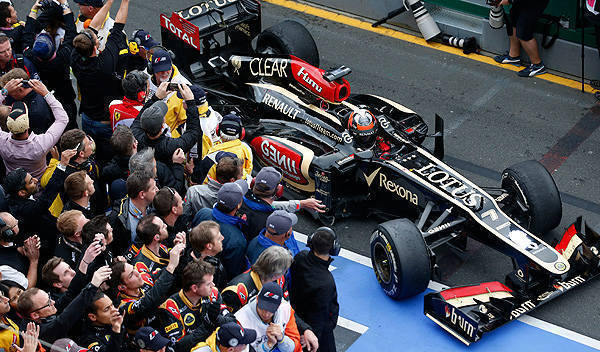 Kimi Raikkonen is usually reticent, choosing to give short and curt responses to the media's questions. Yet, just hours after winning the first race of the 2013 Formula 1 season in Australia, he seemed chatty, giving a lengthy statement about how everything came together for the Lotus F1 team to give them the victory.

"We've had a quick car all weekend and there were no issues with it either, so we could just focus on trying different things and getting the setup how we wanted," said Raikkonen. "I had a good feeling that we would be okay with the tires after practice, and the team got the strategy perfect. I made a few places at the start and then had a good battle with Lewis (Hamilton), but after that it was quite simple--probably one of my easiest wins. You can't start the season much better than winning the first race, and of course we hope we can be fighting at the front of the championship. But there's a long way to go still, and we need to keep pushing hard all the way."

But can Raikkonen really bag the drivers' championship at the end of the season?

While using the first race of the season as a barometer to predict the winner of a 19-race season can be considered futile, the odds are seemingly in Raikkonen's favor. After all, 11 of the past 17 winners since the race was relocated to Albert Park from its original home at the Adelaide Street Circuit in 1996, went on to win the championship the same year they won the race.

Believe it or not: Mercedes-Benz creates G63 AMG 6x6
View other articles about:
Recommended Videos
Read the Story →
This article originally appeared on Topgear.com. Minor edits have been made by the TopGear.com.ph editors.
Share:
Retake this Poll
Quiz Results
Share:
Take this Quiz Again
TGP Rating:
/20