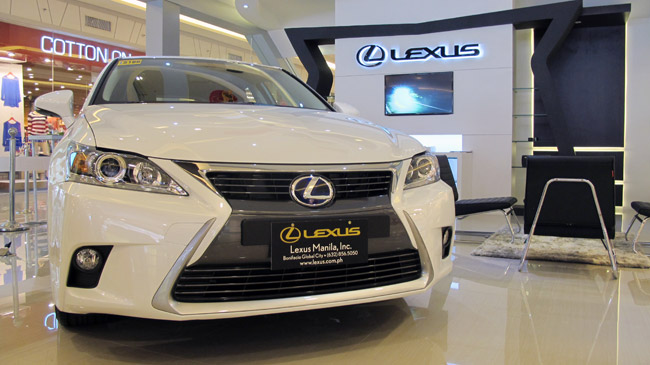 The Lexus CT200h finally wears the spindle grille, and Lexus Manila is already selling this face-lifted version. At the official launch of the Lexus Gallery boutique store in Robinsons Magnolia yesterday, the distributor of the Japanese luxury car brand also presented the first Philippine public appearance of the new CT200h hybrid hatchback.

New for this particular edition are the revised spindle-grille face, the shark-fin antenna, the parking sonar system, and the 16-inch split five-spoke alloy wheels. In addition to these changes, the new CT200h also gets LED daytime running lights, new front bumper with revised tow hook covers, new rear bumper, new rear diffuser, aero-stabilizing fins for the taillights and the side mirrors, larger rear spoiler, and LED lighting for the rear license plate. Inside, redesigned parts include the steering wheel and the gearshift.

The CT200h is still powered by a hybrid system that consists of a conventional 1.8-liter gasoline engine and an electric motor. Mated to a CVT, the hybrid propulsion produces a combined 134hp.

Still pricey, in other words.