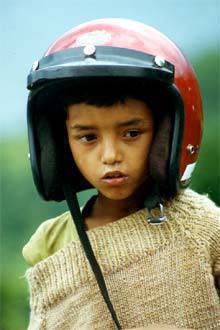 The Committee on Transportation at the House of Representatives has created a team to expedite the passage of bills that seek to prohibit children from riding motorcycles.

Cajayon, author of House Bill 2185, said her bill seeks to ban children below nine years old from being transported on motorcycles and tricycles along highways.

On a similar vein, Acop, author of House Bill 3554, wants to prohibit parents and adults from permitting children below nine years of age from riding as pillion passengers.

"Riding a motorcycle, whether as a driver or rider requires a balance of body weight and the weight of the bike especially in high-speed driving or weaving in and out of traffic. Children's physical frailty and their lack of agility that of an adult while co-riding in a motorcycle place them at great risk," said Acop.

"This bill is consistent with the policy to provide safety measures to all riders and passengers particularly children passengers seven years old and below aboard motorcycles," said Mercado-Revilla.

Rep. Gabriel Quisumbing from the sixth district of Cebu, however, proposed that there should be some exemptions to the bill, specifically for the local government units located in remote areas where the motorcycle is the only mode of transportation available for the public.

What do you think is the right age for children to ride motorcycles and should exemptions be made if this is enacted into law?