And it hasn't even reached showrooms yet
Mar 9, 2011
CAR BRANDS IN THIS ARTICLE 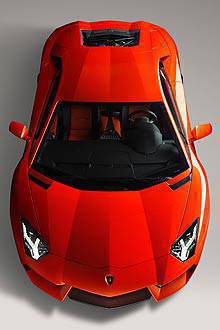 It's been only a week since Lamborghini revealed the new Aventador LP700-4 yet the Italian carmaker said units it plans to produce for the next 12 months have already been sold.

Lamborghini, which is expecting a "slow but steady recovery" in the supercar market, has laid out long-term plans involving solid investments in new products even during trying times.

"The extraordinary response to the new Lamborghini Aventador LP 700-4 is the best proof that our vision is right," said Automobili Lamborghini president and chief executive Stephan Winkelmann.

Lamborghini did not reveal how many units will be produced in the next 12 months. It did say, however, that the 4,099 Murciélago units were produced in a course of 10 years, making it "one of the most sought-after super sports cars in automotive history and the absolute best seller in Lamborghini's twelve-cylinder history."

Lamborghini expects to exceed last year's turnover of 1,302 units, which was down by 213 over 2009's figure of 1,515. The carmaker attributed the decline to the end of production of the Murcielago, which left Lamborghini with just one model, the Gallardo.

Delivery of the Aventador will start in the second half of 2011. Joining the Aventador when it rolls out of the assembly line is the lightweight, open-top Gallardo LP 570-4 Spyder Performante, which Lamborghini unveiled in November 2010.

Lower speed limit answer to looming fuel crisis?
View other articles about:
Read the Story →
This article originally appeared on Topgear.com. Minor edits have been made by the TopGear.com.ph editors.
Share:
Retake this Poll
Quiz Results
Share:
Take this Quiz Again
TGP Rating:
/20