Other Ford plants gear up for production
Dec 8, 2010
CAR BRANDS IN THIS ARTICLE 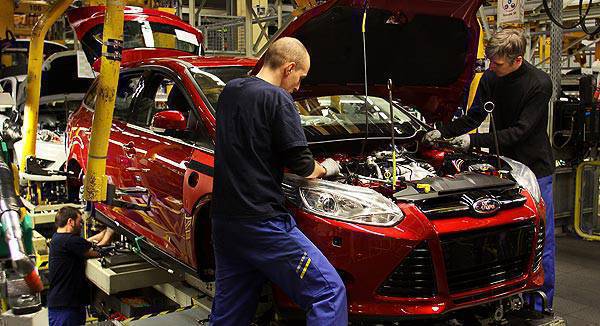 The first unit of the all-new Ford Focus has rolled off the American carmaker's Saarlouis assembly plant in Germany.

"This is an important day for Ford, the Saarland and for Germany," said Ken Macfarlane, vice president of Ford Europe’s manufacturing unit. "Saarlouis is proud to have been the lead plant for Ford Focus production in Europe since the first model was launched in 1998. Throughout that time, its skilled and dedicated workforce has worked hard to ensure that the plant is recognized throughout the industry for its manufacturing efficiency and quality."

The German assembly plant will be the single source for the Focus’s production in Western Europe.

Ford's assembly plant in Germany is building the Focus in three body styles--the four-door sedan, the five-door hatchback and the wagon. Production of the high-performance ST variant will be start in early 2012.

For the North American market, Ford's Michigan assembly plant is getting ready to produce the sedan and the hatchback while the plant in St. Petersburg, Russia will manufacture both variants in mid-2011.

Production of the Focus for the Asia Pacific region will start in 2012 in Chongqing, China and Rayong, Thailand.

The all-new Ford Focus is a significant vehicle for the American car manufacturer and is a key component in the One Ford plan to leverage the company’s global assets as approximately 80 percent of its parts can be shared globally.

Nissan starts selling 3.5-liter Teana
View other articles about:
Read the Story →
This article originally appeared on Topgear.com. Minor edits have been made by the TopGear.com.ph editors.
Share:
Retake this Poll
Quiz Results
Share:
Take this Quiz Again
TGP Rating:
/20