See how much it cost the American carmaker
by Vernon B. Sarne | Jul 12, 2012
CAR MODELS IN THIS ARTICLE 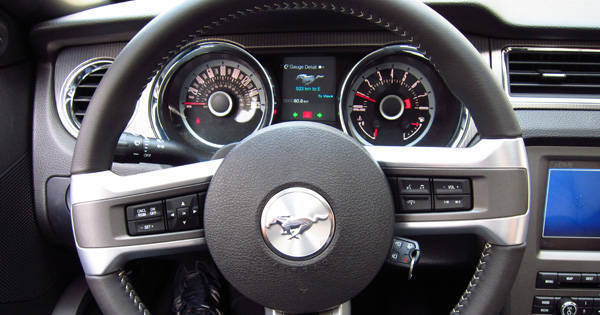 See the photo above? That's the actual cockpit of the 2013 Mustang GT that Ford Group Philippines lent us this week. Not sure if you can spot it clearly, but the speedometer in the instrument cluster shows mph (miles per hour) readings, with smaller kph (kilometers per hour) readings serving as a mere supplement. This means this is a US-market unit.

To assemble the Philippine-bound Mustangs--with kph speedometers, underchassis reinforcement, and fittings and seals designed to withstand harsh conditions in our hot, humid and pothole-riddled country--Ford's manufacturing facility for the Mustang in Flat Rock, Michigan, had to stop its assembly line for a week in order to squeeze in FGP's orders.

And just how many Philippine-market Mustangs did FGP ask its parent company to put together?

"We can't divulge that," said Castillo.

He did say, however, how much it cost Ford to sort of retool the Mustang assembly line to produce our market-specific units. "It cost them $100,000," he revealed.

So Ford produced our Mustangs in one go. But what happens after FGP sells out its Mustang inventory?

Do you think Ford Group Philippines will be able to sell out its first batch of Mustangs? Take our poll.

Toyota Motor PH wraps up first half with 18% sales growth
View other articles about:
Read the Story →
This article originally appeared on Topgear.com. Minor edits have been made by the TopGear.com.ph editors.
Share:
Retake this Poll
Quiz Results
Share:
Take this Quiz Again
TGP Rating:
/20