For everyone's information and guidance
by Vernon B. Sarne | Dec 17, 2015
CAR BRANDS IN THIS ARTICLE 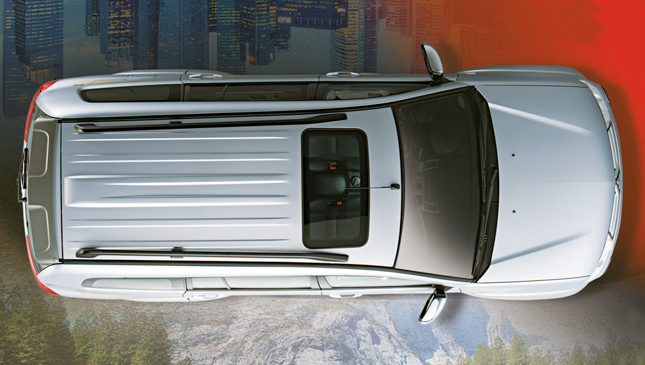 Today, the Department of Trade and Industry released the result of its two-week investigation--as well as its recommendations--of the "sudden unintended acceleration" case filed against Mitsubishi Motors Philippines involving the Montero Sport SUV. For the record, of the reported 97 complainants who claimed their vehicles were suffering from SUA, only 24 actually filed formal complaints with DTI.

The entirety of the 15-page report is shown below, but just in case you don't have the time nor the inclination to go through the whole transcript, we'd like to give you the salient points here.

* From 2009 to October this year, there were only 10 consumer complaints received by DTI, "four of which were dismissed while two remain pending final resolution." On November 10 this year, a complainant by the name of Bernardino Bernardo reported his alleged SUA incident, after which the number of complaints filed with DTI ballooned to 24. Because of the recent spate of complaints, DTI's Consumer Protection Group created an investigating panel to look into said allegations.

* On December 2, 2015, DTI held an initial panel investigation "to gather information in order to determine the cause of the SUA 'phenomenon' and to establish the particular person/entity to whom/which the SUA is attributable."

Based on their position paper, the complainants wanted MMPC "to buy back their respective Montero Sport vehicles"; they wanted "to avail of the benefits of the law"; they wanted MMPC "to acknowledge that indeed there exists a defect in their vehicle and for the latter to render public apology; they asked MMPC "to remedy the current situation"; and they wanted DTI "to recall all Montero Sport automatic-transmission vehicles and ban the same from the market, and require or order MMPC to stop selling the subject vehicles."

In this same hearing, MMPC presented its position that the Montero Sport suffers from no SUA-causing defect. The company also shared its proactive countermeasures to prevent drivers from getting involved in an "SUA" incident: mandatory use of authorized floor mats; installation of caution sticker; brake override system; and shift lock system. MMPC also mentioned a free nationwide checkup for Montero Sport customers, and educating owners regarding automatic-transmission operation.

Representatives from Department of Science and Technology, UP College of Engineering, Technical Education and Skills Development Authority and Philippine Society of Mechanical Engineers "proposed that the vehicle be subjected to extensive testing to determine what particular component of the electronic, electrical or mechanical parts...is causing the SUA."

* On December 4, 2015, the investigating panel went to the MMPC plant in Santa Rosa, Laguna, "to check Mitsubishi's onboard diagnostic equipment and its functions, as well as to test any possible errors in the engine." The session included demonstration and test drive. MMPC personnel simulated "SUA" situations in an attempt to show that the vehicle could be stopped or controlled even assuming that the engine is revving wildly on its own.

The investigating panel noted that the Montero Sport's data trouble code for the engine, the brakes and the transmission "have not been updated since the introduction of the Montero Sport way back in 2008." The panel also noted that "there are possible inadequate parameters of the electronic control unit."

* On December 7, 2015, the 24 complainants filed their joint position paper. Acting as their legal counsel is Atty. Charlie Tumaru, a complainant himself.

* On December 9, 2015, the investigating panel met with experts Engineer Enrico Belmonte and Jake Arellano, and MMPC representatives "to discuss said experts' hypotheses/postulates which could be the cause of the SUA." Belmonte brought up the Venturi effect on the intercooler, while Arellano cited a possible oil leak in the intake manifold. The credentials of the experts are not stated in the report.

* On December 10, 2015, the investigating panel met with DOST "to discuss the possibility of using DOST equipment" at its Electronics Product Development Center. Unfortunately, DOST's laboratory "is only capable of testing for electromagnetic emission and not for immunity." The agency thus recommended the use of a third-party electromagnetic compatibility laboratory, citing facilities in Malaysia, Thailand, Singapore, Germany and Taiwan as options.

* On December 11, 2015, the investigating panel inspected two SUA-related Montero Sport units in Quezon City "to test the experts' hypotheses/postulates." The tests were negative.

* On December 15, 2015, "MMPC presented its own experts in the persons of Akinori Ishibashi, Osamu Tomita and Hiroyuki Tanaka" from Mitsubishi Motors Corporation of Japan. These MMC experts presented to the investigating panel the results of their own tests conducted in November 2011, which included testing for electromagnetic emission and immunity, as well as for static electricity. The tests had also been negative.

* Today, December 17, 2015, DTI presented its technical recommendations: (1) for DTI, DOST and MMPC to determine within 30 days the terms and conditions for an independent third-party investigation; (2) for MMPC to provide "mandatory preventive maintenance" to all the Montero Sport AT units of the complainants, and if necessary, replace parts "directly related to the engine, brake and/or transmission systems of the vehicle," at no cost to the owners; (3) for all Mitsubishi dealers to "record stored data trouble codes and compare all vehicle findings to determine if there is a common DTC that appears in many Montero Sport AT units; (4) for MMPC to conduct a "quality reassurance certification on all the SUA complainants' vehicles, including non-SUA complainants who own a Montero Sport for purposes of acquiring peace of mind"; (5) for all other Montero Sport AT owners "to continuously avail of the free checkup to determine the condition of their vehicles"; (6) for MMPC to instruct salespeople "to fully explain to all prospective buyers the manner of using Montero Sport units with automatic transmission prior to purchase"; (7) for MMPC to issue a public advisory on the matter; (8) for MMPC not to resell SUA-related units "until there is a declaration that the vehicles are roadworthy"; and (9) for owners of units that will be recalled, if necessary, to also avail of waived repair costs.

DTI's legal recommendations, meanwhile, are the following: (1) "endorsement of all 24 complaints to the Fair Trade Enforcement Bureau" of the agency; and (2) "the filing of the necessary Formal Charge against concerned parties" should the aforementioned third-party investigation yield "reasonable grounds."

To recap: DTI needs to conduct an independent technical test. For now, there is no recall of the Montero Sport. Read the full report below. 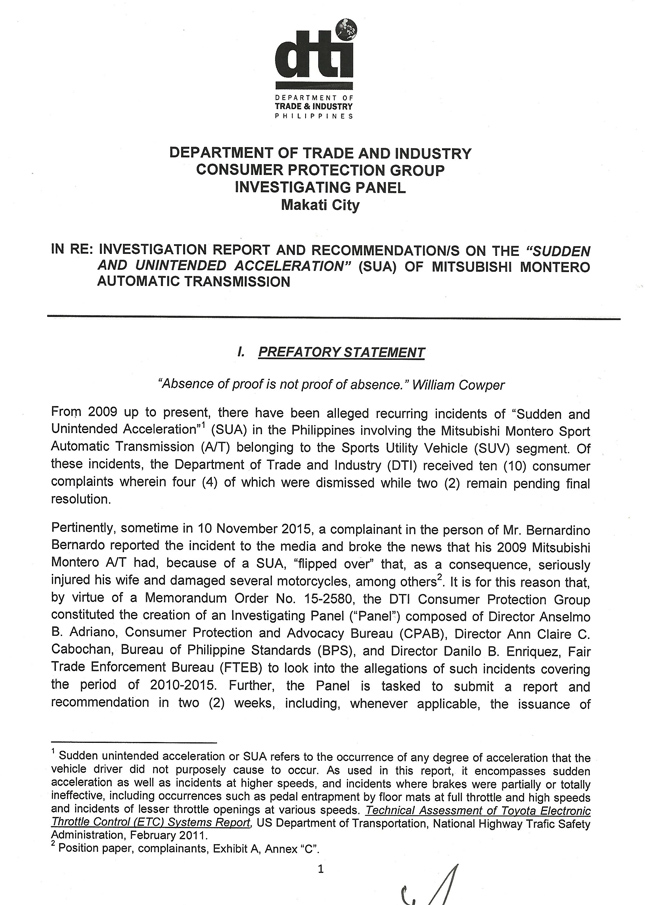 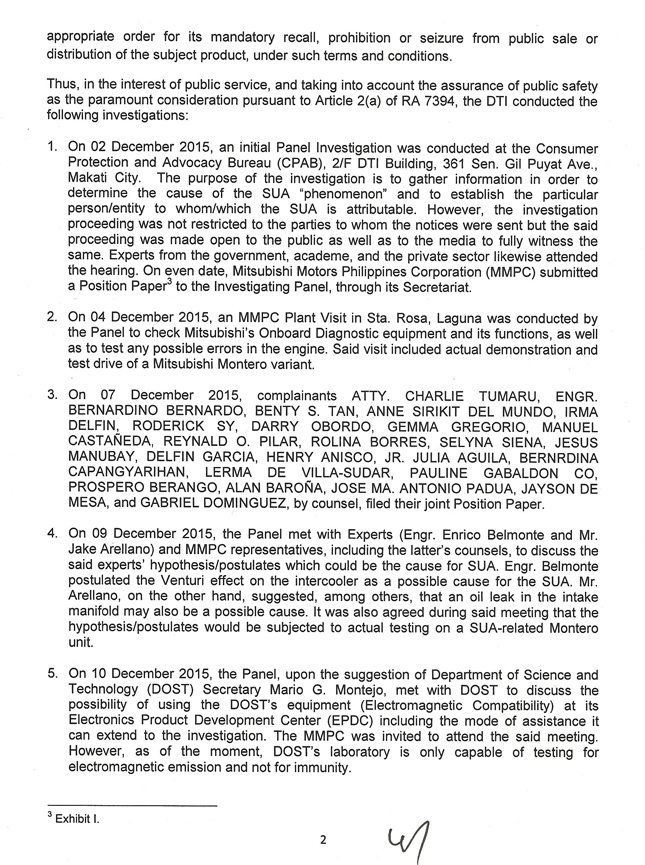 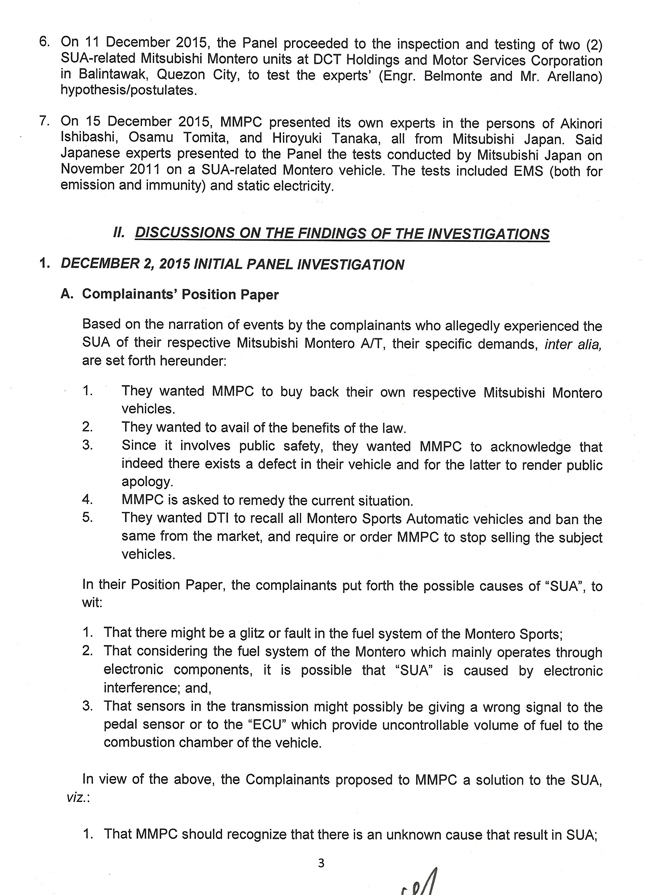 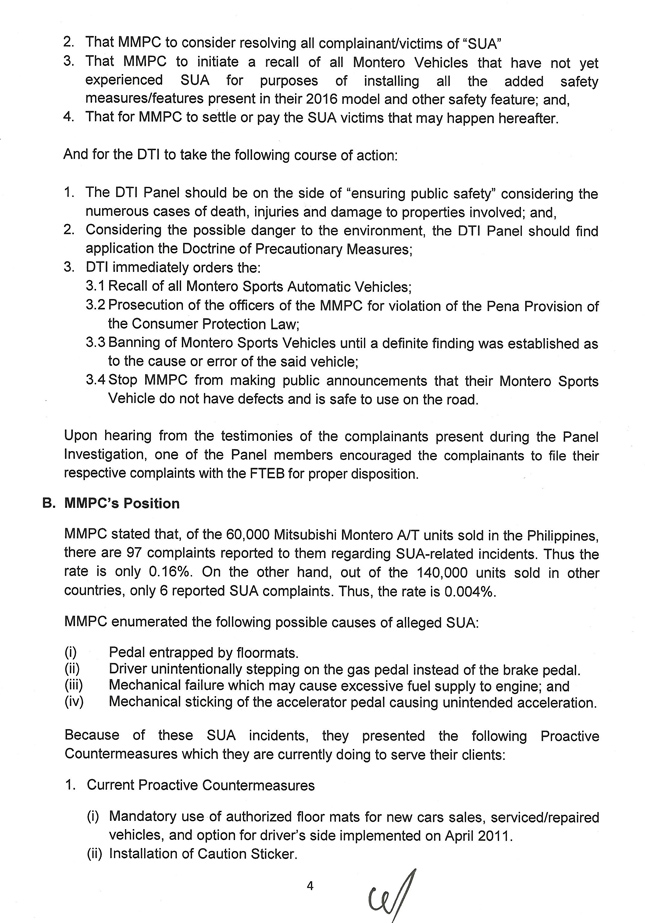 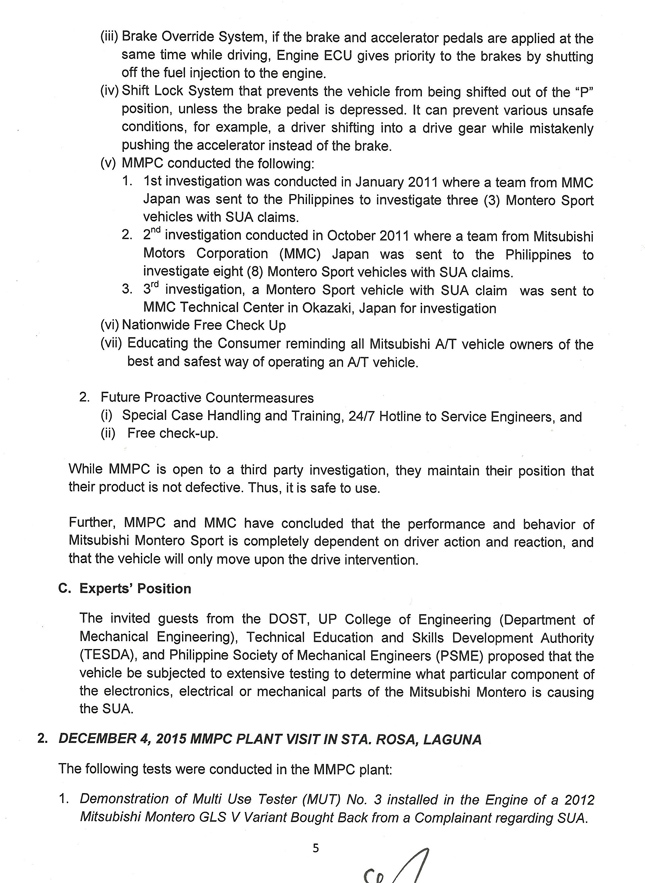 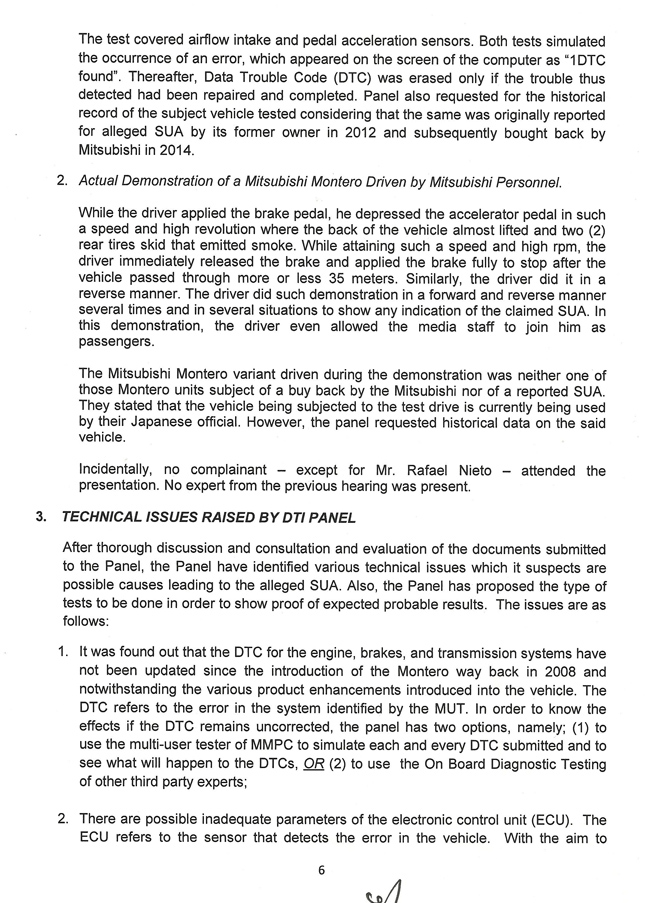 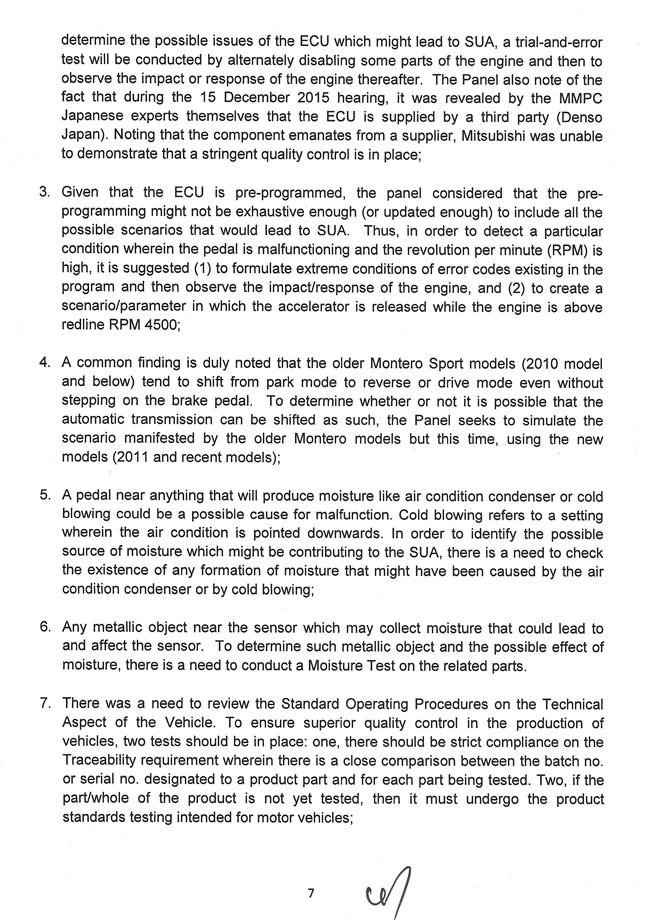 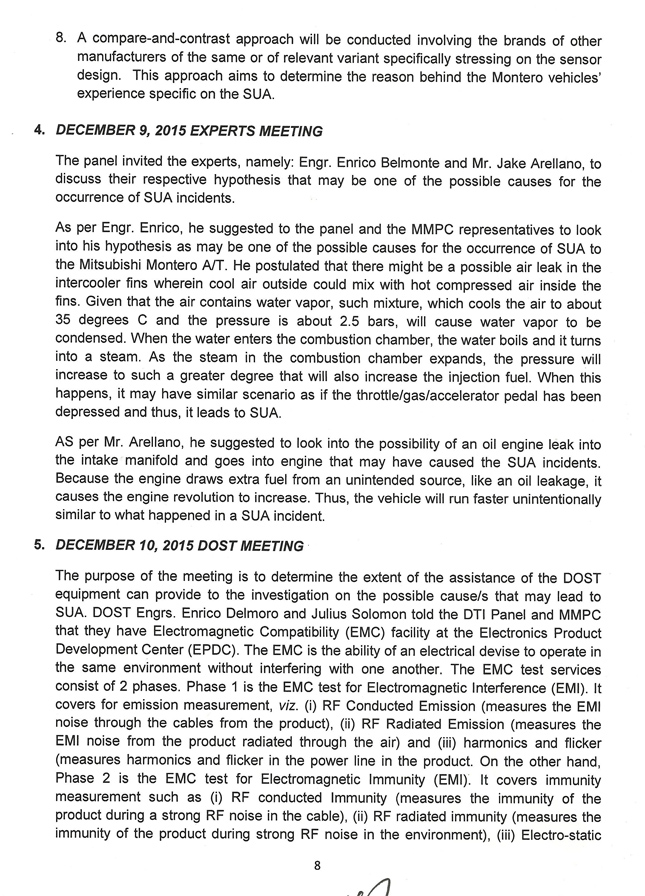 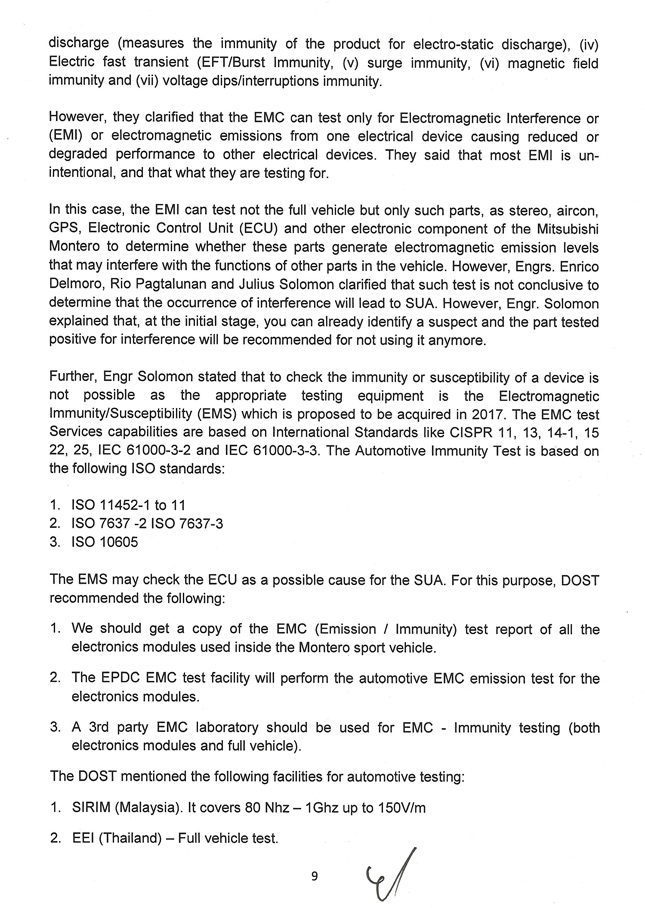 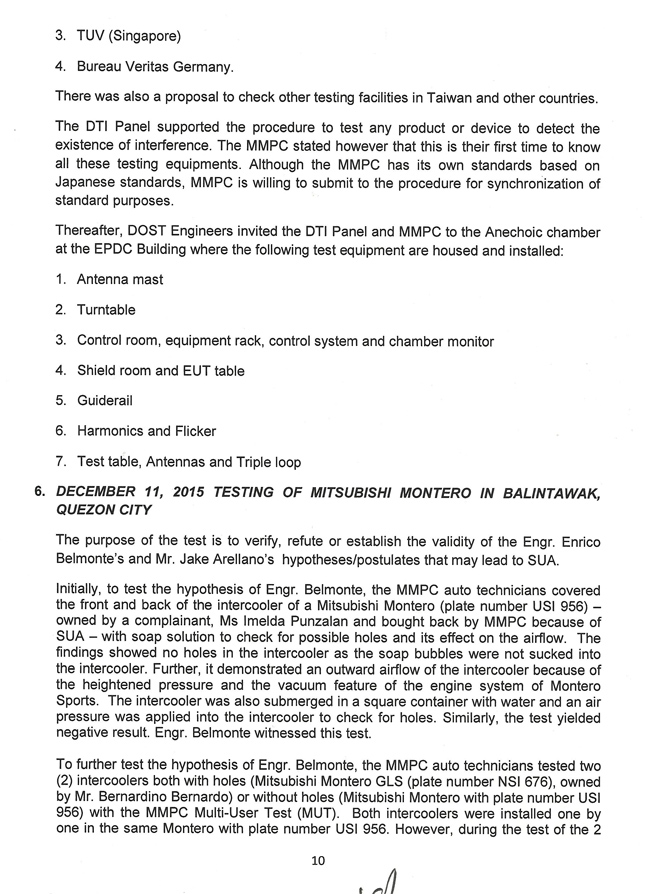 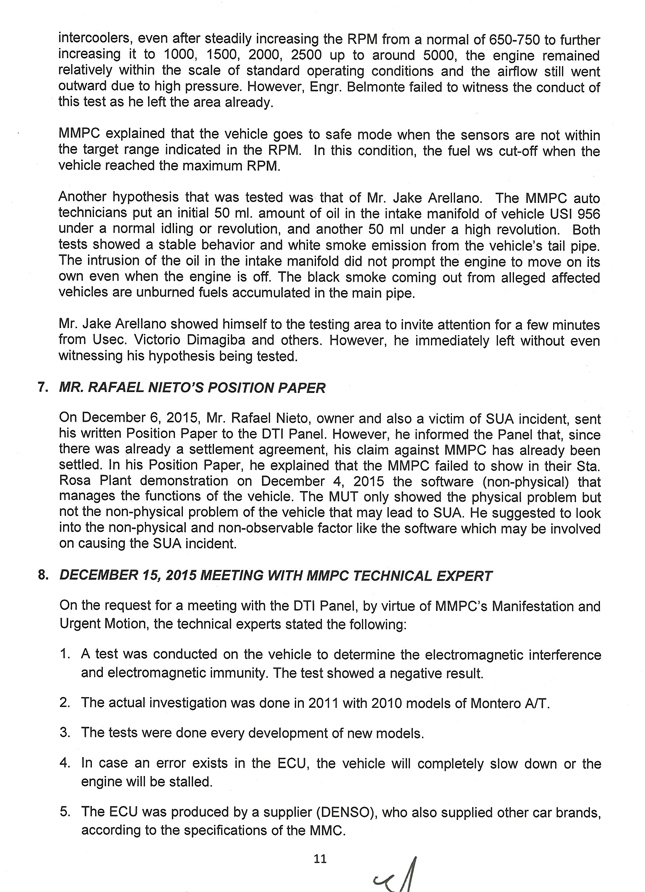 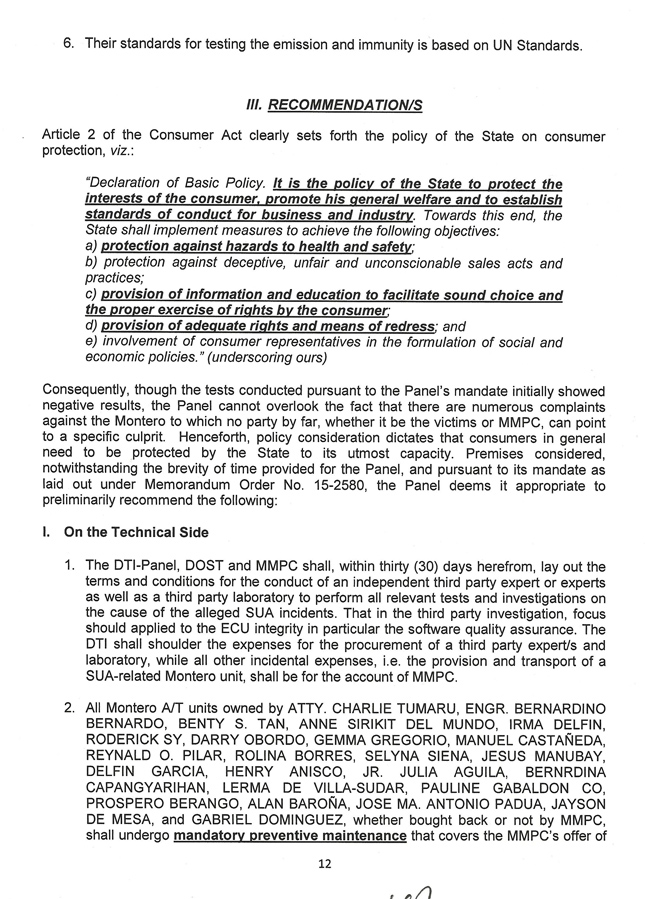 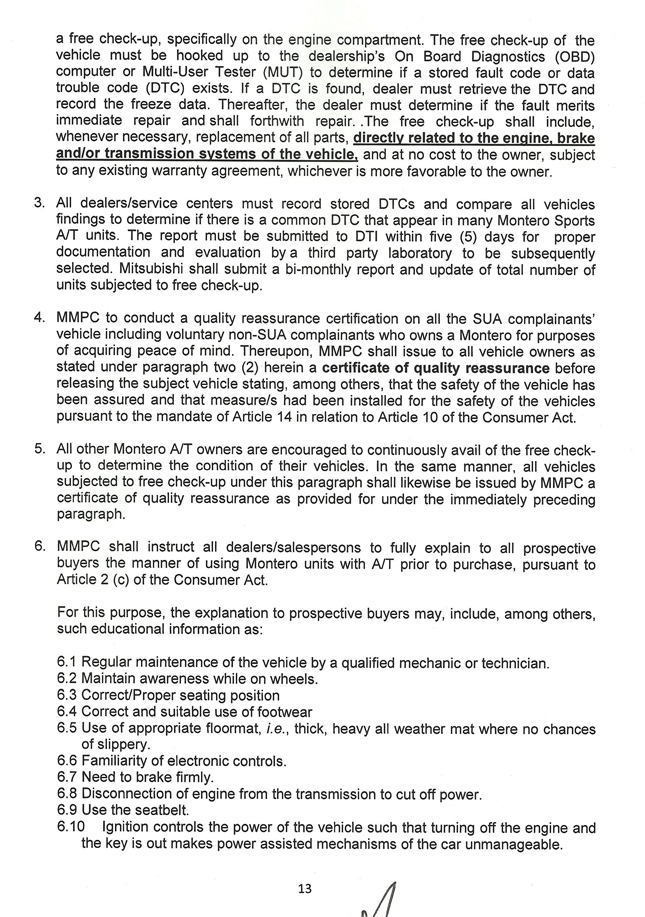 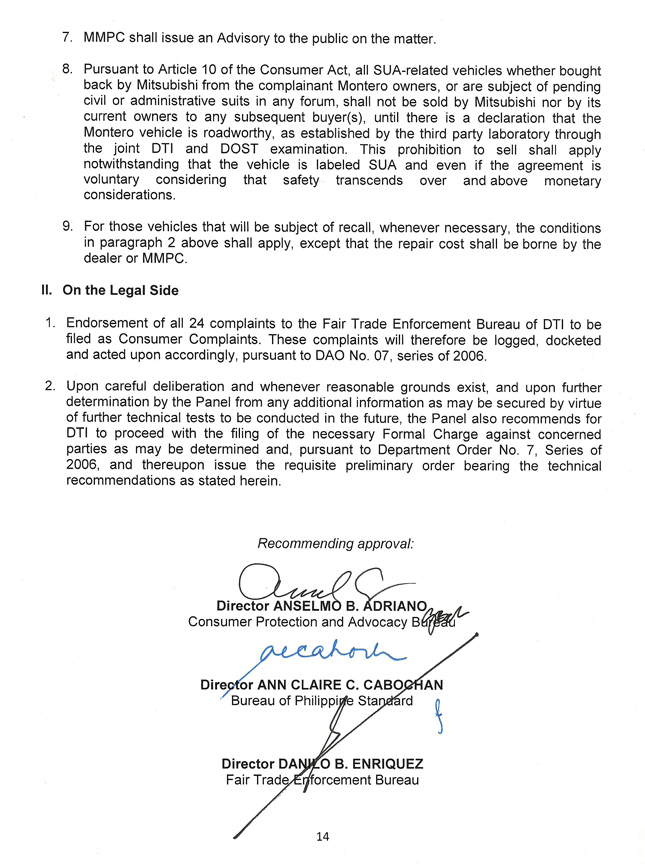 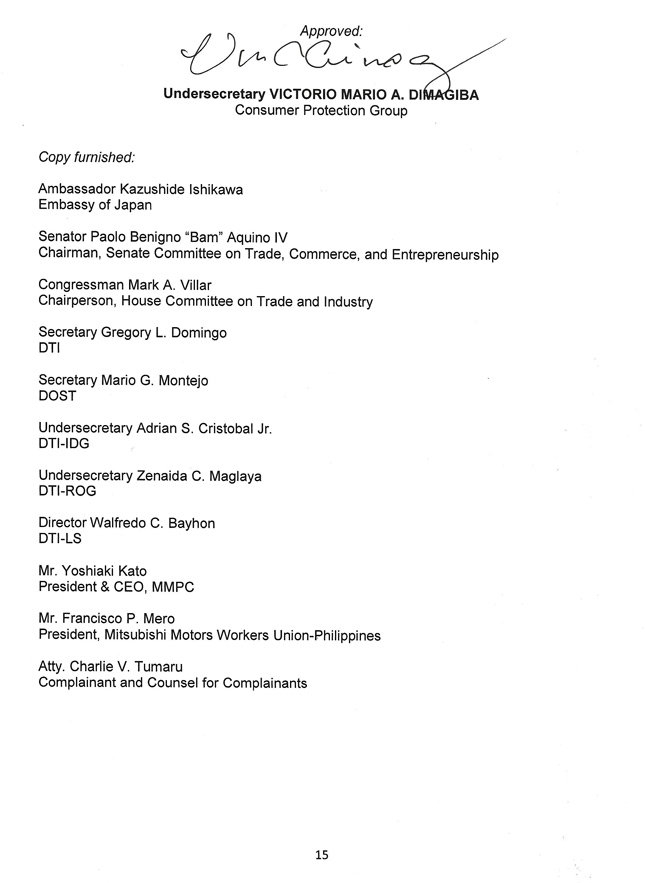 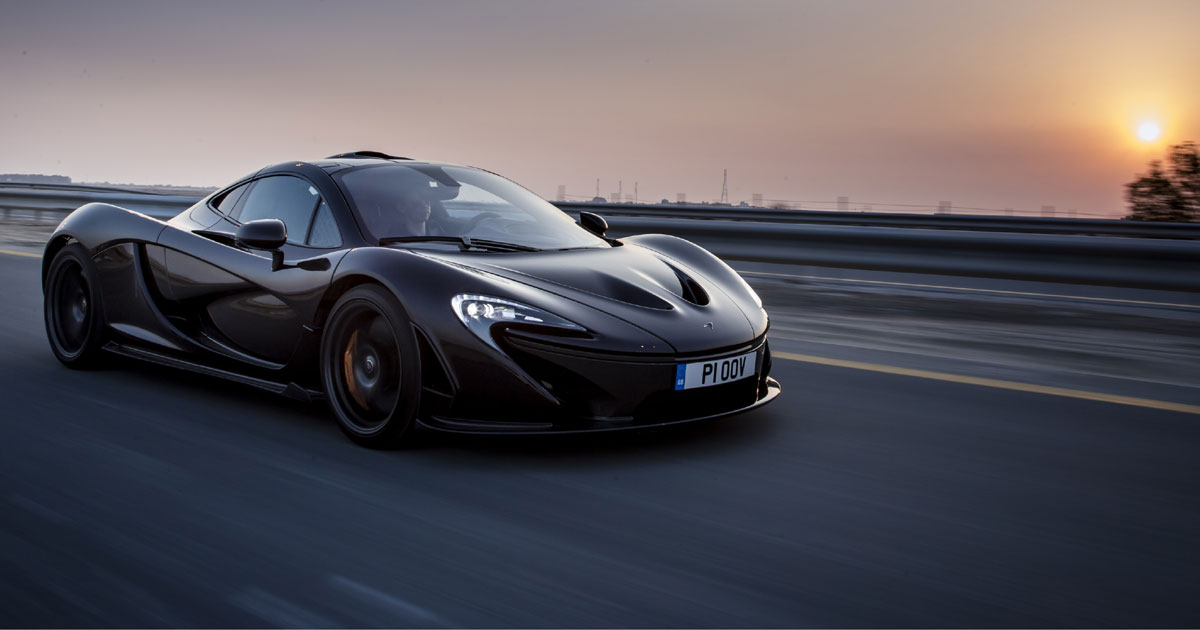 Farewell, McLaren P1
View other articles about:
Read the Story →
This article originally appeared on Topgear.com. Minor edits have been made by the TopGear.com.ph editors.
Share:
Retake this Poll
Quiz Results
Share:
Take this Quiz Again
TGP Rating:
/20