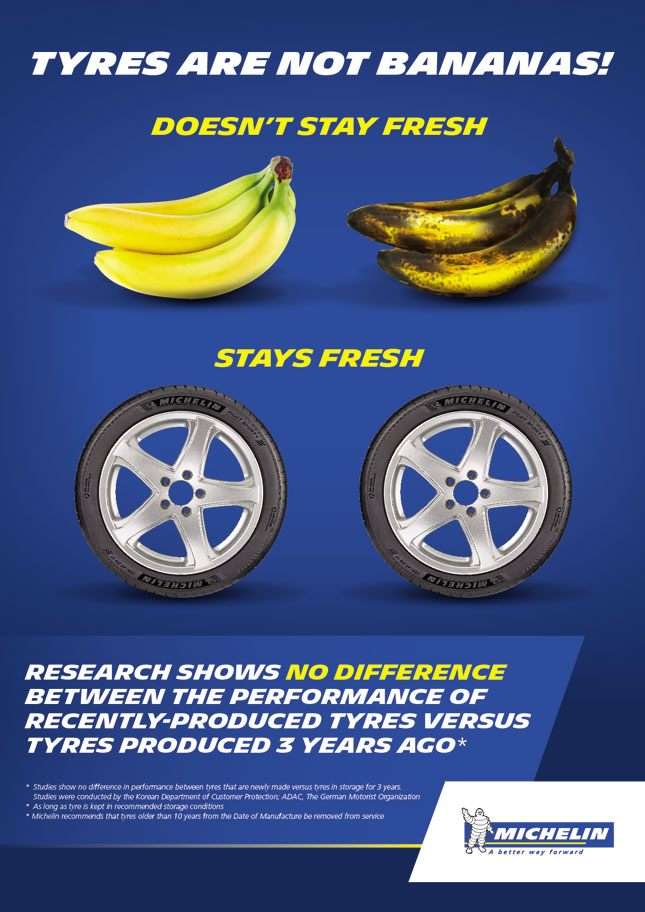 A big part of road safety is making sure that your car's tires are fit to run. Like fruit, tires have a limited shelf life before they need to be thrown out. Unlike a banana though, a tire's health isn't always determined by a stamp from the seller.

French tiremaker Michelin has launched its 'Tires Are Not Bananas' campaign. Its goal is to educate customers about determining the right time to replace their car's tires. Contrary to what we're used to with expiry dates on other products, Michelin says that a tire's aging process doesn't start from its date of its fabrication (DOT). It actually starts once the tire is inflated and installed on the car. This is because tires undergo the most stress when they're being used, not while they're sitting in storage.

According to Michelin's chief Philippine representative Michael Nunag, three studies were conducted in Korea, Germany, and Saudi Arabia that showed no difference in performance between newly manufactured tires and ones that have been unused for three years. He explained: "The Saudi Arabia study showed that a tire used on a vehicle for one year had equivalent aging to a tire in storage for 10 years. In terms of the characteristics of the tread rubber, it took 20 years in storage at 40 degrees celsius to reach the same characteristics as the tires used at 40,000km, showing that tires do age more rapidly when used than when stored.”

Nunag says that the common misconception of basing tire purchases on DOTs can be dangerous because consumers tend to fixate on it instead of maintaining their tires properly after installation. They might also choose the wrong dealers based on new stocks instead of quality service. So instead of focusing on the DOT, Nunag says that attention should be paid to “maintaining correct tire pressure, proper alignment, inspection for damages, and tread depth measurements.”

Michelin recommends that tires older than 10 years on cars should be scrapped. “The recommendation is precautionary and not technically based, “ Nunag said. “Tires endure lots of different stresses during their life on a vehicle. Sometimes the vehicle may be out of alignment, or the tire may be under inflated. Road obstacles, potholes, floods, extreme heat in the summer all take their toll on the tires.”

To further drive home the point of counting a tire's age from the time of installation, Michelin's tires come with a six-year warranty for replacement passenger and light truck tires that begin once they're bolted on to the axle. 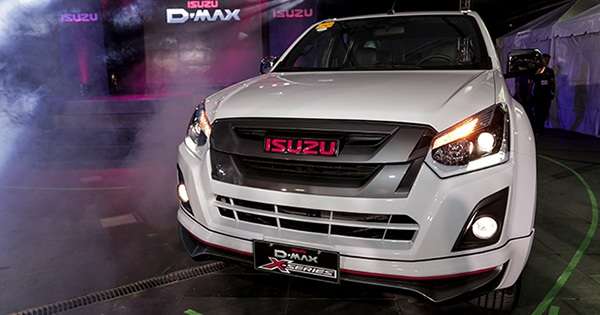 The Isuzu D-Max looks sporty as hell in the new X-Series package
View other articles about:
Read the Story →
This article originally appeared on Topgear.com. Minor edits have been made by the TopGear.com.ph editors.
Share:
Retake this Poll
Quiz Results
Share:
Take this Quiz Again
TGP Rating:
/20