Here's what it signifies

Summit Media launches its new logo today to signify the growing importance of its digital properties to its overall media portfolio. The publisher's 15 websites reach an average of 22 million unique viewers monthly, making it the leading lifestyle digital network in the country. Sixteen million of that audience comes from the Philippines, representing 27% of the country’s total internet population.

"Our old logo no longer represents the company's ambitions of being a multi-platform player with a focus on digital," said Summit Media president Lisa Gokongwei-Cheng. "We are clearly dominant in print, but many people do not realize that we are also a significant player in digital and billboards."

"No matter what platform, whether print, events, digital, or billboards, Summit Media will continue entertaining, inspiring, and engaging audiences with excellent content, with the purpose of enhancing people’s lives," Gokongwei-Cheng added.

The new logo was designed by Plus63 Design Co., a local design studio that has done commercial work for CITEM, Monde-Nissin, and Procter & Gamble, besides work for international publications like Wired, The Guardian, and The Wall Street Journal. Its co-founder Dan Matutina’s work has been featured in The Washington Post’s 2016 List of Best Illustrations.

Symbolically, the triangle signifies creativity, harmony, balance, progression, and action. When it points upwards, it conveys ambition and ascension—and in this case, a reflection of how the company values the constant climb towards excellence, symbolized by the triangle’s apex or summit.

The triangle symbolizes Delta, the fourth letter in the Greek alphabet, which means change, mirroring the company’s dynamic direction and progressive nature, but rooted to the ground with a strong and stable foundation coming from years of expertise and mastery.

That this triangle is equilateral also signifies the harmony of its points, or the company’s three pillars—its people, audience, and advertisers. The color red connotes passion, the strongest driving force in everything the company does. Red is intense, grabs attention, stimulates energy, and evokes strong emotions. The triangle logo’s color gradation through the four unequal sub-triangles demonstrates the range of platforms in the ever-changing media landscape.

Summit Media is a major player in Philippine lifestyle media with leading positions in websites, magazines, books, and billboards. 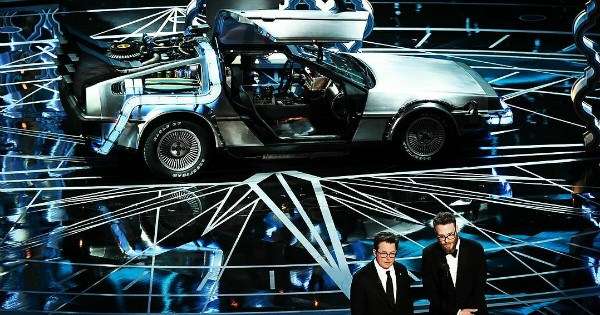 The DeLorean was a special guest at the 2017 Oscars
View other articles about:
Recommended Videos
Read the Story →
This article originally appeared on Topgear.com. Minor edits have been made by the TopGear.com.ph editors.
Share:
Retake this Poll
Quiz Results
Share:
Take this Quiz Again
TGP Rating:
/20