More than 8 minutes of tire-ripping action
Jul 10, 2012
CAR MODELS IN THIS ARTICLE 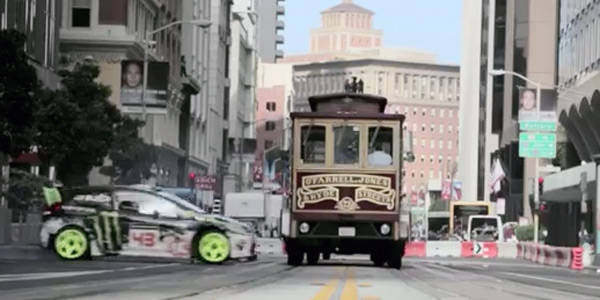 So, here it is: Gymkhana 5, the fifth installment in Ken Block's hooning series, featuring the extremely modified Ford Fiesta in Monster livery. This time around, the popular rally/drift racer terrorizes the streets of San Francisco. Because he can. And because this city in California has been immortalized as the backdrop of choice in many a Hollywood movie (most notably Bullitt).

We don't know aboout you, but Block's exploits behind the wheel are beginning to get old. Most of the time, he's doing the same tricks and maneuvers. The only difference is the landscape, of course. At the end of the video, it feels a bit like you've already seen it all before. Well, except for two things.

First is the cameo of Travis Pastrana on a motorbike. And second is the fact that Block's production crew was able to secure the streets of what is otherwise a busy city for all that tire-smoking action. It's still great overall. A hooning video, after all, will always be better than 75 percent of the stuff we see on YouTube, so we're not complaining.

Watch Gymkhana 5 and judge for yourself.

Nissan teams up with Ministry of Sound to create Juke Box
View other articles about:
Read the Story →
This article originally appeared on Topgear.com. Minor edits have been made by the TopGear.com.ph editors.
Share:
Retake this Poll
Quiz Results
Share:
Take this Quiz Again
TGP Rating:
/20