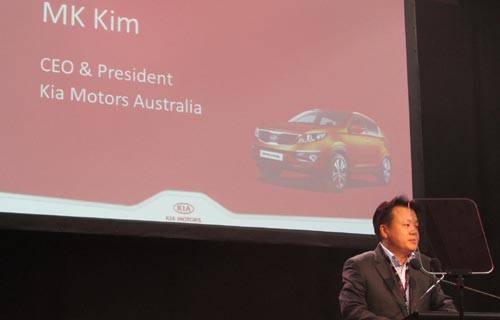 Earlier this week, Top Gear Philippines attended the Kia Sportage media test-drive event in Queenstown, New Zealand. There, Kia Motors Australia chief executive and president Min Kun Kim shared with the press the next three models that Kia is expected to introduce in the coming months. These are the five-door Cerato/Forte compact hatchback, the new Rio subcompact, and the redesigned Optima/K5 midsize sedan.

Meanwhile, Boying Soriano, the marketing services manager of Columbian Autocar Corp., the authorized distributor of Kia vehicles in the Philippines, disclosed that the new Picanto is scheduled to be launched next year. Soriano also said that Columbian's struggle to cope with demand is due to supply problems in Kia's manufacturing base in South Korea.

"Kia is seeing phenomenal growth everywhere in the world these days," Soriano said, "so they're having some problems with the allocation of units. Even in its domestic market of Korea, Kia has already overtaken Hyundai in sales this year."

According to Soriano, their biggest challenge is the importation of diesel units, since the diesel engines found under the hood of Kia vehicles are made by sister automaker Hyundai. But because of the strong demand for diesel models, Soriano revealed, Kia is already preparing to open and operate its own diesel-engine manufacturing facility.

Nissan Murano to have convertible variant
View other articles about:
Recommended Videos
Read the Story →
This article originally appeared on Topgear.com. Minor edits have been made by the TopGear.com.ph editors.
Share:
Retake this Poll
Quiz Results
Share:
Take this Quiz Again
TGP Rating:
/20