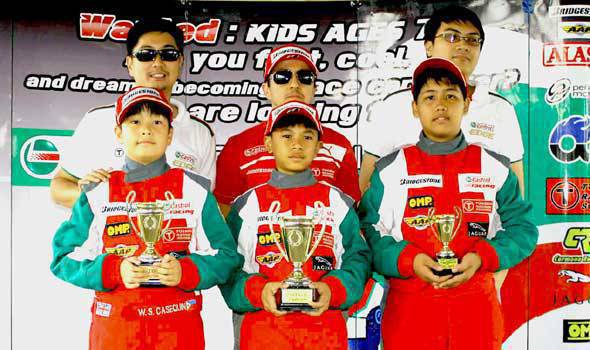 Twelve-year old Raymond Ryan Cudala showed great potential in motorsports as he dominated the pre-final and final races during the first leg of the 2011 Castrol Champions of the Future Series at the Carmona Racetrack in Cavite.

Cudala, a Grade 5 student of Elizabeth Seton School, showed an impressive start as he ended up being the only participant to break the 42-second barrier with a best time of 41.17 in the qualifying time trials. From there, he continued to dominate the race with a stock kart setup to best 16 other kids on the actual competition.

William Casequin, the nine-year-old son of touring car champion and TRS race car driver Stuart MacDonald, checked in runner-up in the races. He posted the second best time of 42.19.

"I was quite stunned how aggressive these kids are even though it's yet their first time to race," said Castrol Philippines president Mars Sota, who gave each karter a medal. "I believe our program is on the right track here with the Tuason Racing School (TRS) taking charge of the search, and given the proper training and exposure, one from this batch could make it in the international scene."

The winner in the 2011 Castrol Champions of the Future Series will receive a scholarship package to run in the National Karting Series from the Automobile Association Philippines. They will be trained by seasoned race car drivers JP and Mike Tuason from the Tuason Racing School.

Porsche confirms production of entry-level SUV
View other articles about:
Read the Story →
This article originally appeared on Topgear.com. Minor edits have been made by the TopGear.com.ph editors.
Share:
Retake this Poll
Quiz Results
Share:
Take this Quiz Again
TGP Rating:
/20