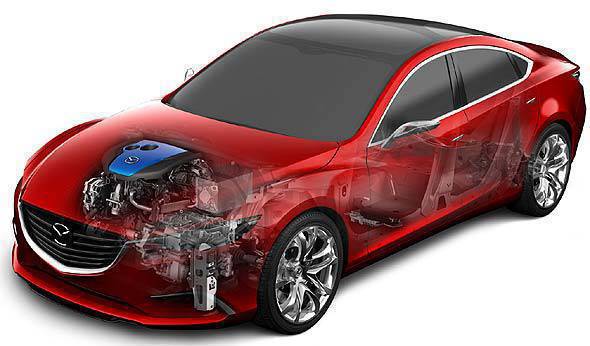 Mazda Motor Corporation has announced its success in developing the world's first regenerative-braking system for passenger vehicles. It will begin to be part of Mazda vehicles starting 2012.

The system, called the i-ELOOP, uses a capacitor to improve fuel economy by approximately 10 percent in real-world driving conditions.

Mazda said the capacitor is an electrical component that temporarily stores large volumes of electricity.

"Compared to batteries, capacitors can be charged and discharged rapidly, and are resistant to deterioration through prolonged use," Mazda said in a statement. "i-ELOOP efficiently converts the vehicle's kinetic energy into electricity as it decelerates, and uses the electricity to power the climate control, audio system and numerous other electrical components."

Mazda said regenerative-braking systems, which use an electric motor or an alternator, are currently gaining popularity as a fuel-saving technology. In hybrids, the system is used with a large electric motor and a dedicated battery.

In its case, Mazda's i-ELOOP features a variable voltage alternator,a  low-resistance electric double layer capacitor and a DC/DC converter. The system recovers kinetic energy when the driver lifts off the accelerator pedal and the vehicle starts to slow down. When this happens, the alternator generates electricity at up to 25V and sends it to the electric double layer capacitor for storage. The capacitor can be fully charged in seconds.

"The system also charges the vehicle battery as necessary," Mazda said. "i-ELOOP operates whenever the vehicle decelerates, reducing the need for engine to burn extra fuel to generate electricyt. As a result, in stop-and-go driving conditions, fuel economy improves by approximately 10 percent."

The name i-ELOOP was coined after the phrase "intelligent energy loop," which Mazda says represents its aim at efficiently using energy.