Alex Restoration does it again
by Patrick Everett Tadeo | Apr 19, 2010
CAR MODELS IN THIS ARTICLE 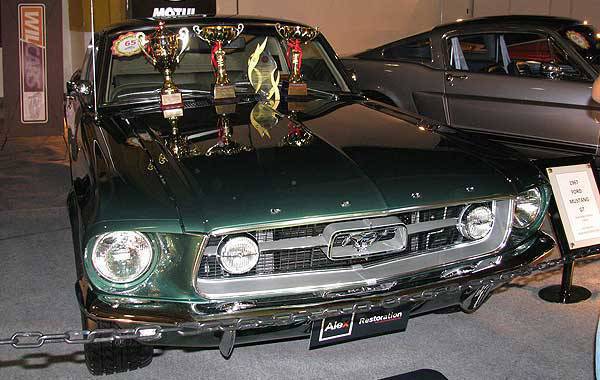 Alex Restoration once again proved it is the premier car restoration specialist in the country as it bagged six awards at the 2010 Manila International Auto Show's Custom Classic Car Competition.

The most coveted award, the Best of Show title, went to the 1967 Ford Mustang GT fastback, which was brought to the Alex Restoration shop in 2008. It is owned by ABS-CBN director Edgar Mortiz.

"Everything in this car was badly deteriorated. The body panels had rusts with some having eaten through the metal already. The seat upholstery was practically gone. It was really sad looking at a car like that in that state," said Alex Isip, owner of Alex Restoration.

From then on, besides working on other customers' cars, Isip restored the Mustang to such a state that it's as if you traveled back in time to see the car fresh off of the showroom floor.

"I basically restored the car to its original showroom state, down to the original green paintjob of the bodywork," Isip said.

Asked which part of the restoration work took the most time, Isip said it was with the interior.

"Working on the dashboard was especially hard because it's hard to source parts for this kind of model. The interior's panels also took some time to finish," he added.

Did you spot this car at the MIAS?