MIAS loses Hyundai, Chevrolet and Volvo from roster of exhibitors

Could it be politically motivated?
by Vernon B. Sarne | Mar 14, 2013
CAR BRANDS IN THIS ARTICLE

The 2013 Manila International Auto Show--scheduled for April 4 to 7 at the World Trade Center in Pasay City--is fast approaching. With just three weeks to go before opening day, one would assume that the list of exhibitors has already been finalized. As you read this, that list looks almost final indeed, but with some major revisions: Hyundai, Chevrolet and Volvo have all pulled out of the show, leaving the organizer working overtime to fill the huge void left by the three brands in the main exhibit hall.

The distributors of Hyundai, Chevrolet and Volvo are owned by businessman Richard Lee, and they all belong to the Association of Vehicle Importers and Distributors (AVID), a breakaway group from the Chamber of Automotive Manufacturers of the Philippines (CAMPI).

In fact, if you check the latest MIAS poster below, you will note that the logos of the three above-mentioned brands are no longer included.

According to a source inside Worldbex Services International, the MIAS organizer, problems started surfacing when Hyundai began demanding a much bigger space for its display booth, which, if granted, would force other brands (in particular CAMPI members, our source says) out of the main hall and into the less prominent and less prestigious tent area. When Worldbex was not able to accommodate Hyundai's wishes, our source adds, the Korean carmaker simply decided to skip the show altogether in spite of pre-event press releases detailing some of the cars it was planning on bringing to the yearly spectacle.

"The event would have been known as the Manila International AVID Show had we moved non-AVID members outside the main hall," jokes our source. Last month, we already reported how carmakers were "jostling for precious floor space" at the show.

Was this a case of Hyundai trying to twist the arm of the MIAS organizer so that CAMPI members (like Kia, for instance) would be relegated to second-fiddle billing? Hyundai Asia Resources Inc. (HARI) says this wasn't the case.

"We reconsidered our participation in this year's Manila International Auto Show owing to the availability of only one concept car, the i-Oniq, which we deemed more appropriate to showcase during the AVID Innovation Congress on April 5," HARI senior PR manager Paeng Batuigas explains. "HARI continues to support MIAS and looks forward to future partnerships with it."

Whatever the real reason is, one thing is for sure: MIAS won't be the same without three popular car brands.

As they always say: The show must go on.

UPDATE: We have been informed that BMW is technically not an exhibitor of the 2013 Manila International Auto Show. But the German brand will have a presence at the event through Tuason Racing School, as BMW will lend its M cars for display at JP Tuason's booth. Tuason, if you remember, is now a certified M driving instructor. 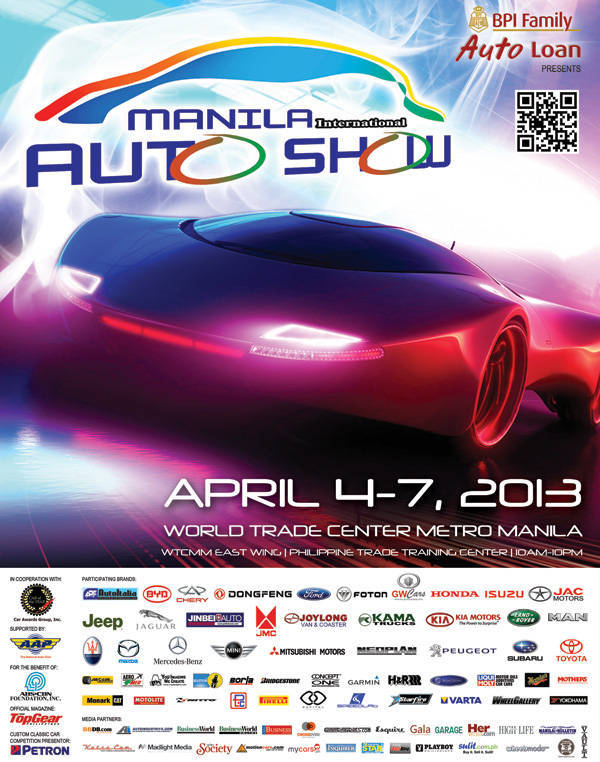 Would you drive this on EDSA?
View other articles about:
Recommended Videos
Read the Story →
This article originally appeared on Topgear.com. Minor edits have been made by the TopGear.com.ph editors.
Share:
Retake this Poll
Quiz Results
Share:
Take this Quiz Again
TGP Rating:
/20