Five days of Mitsubishi madness
May 4, 2011
CAR BRANDS IN THIS ARTICLE 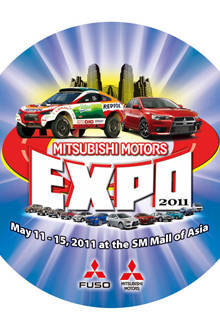 The five-day expo will see Mitsubishi Philippines showcase a total of 15 vehicles from the Japanese carmaker's extensive local lineup of passenger cars, light commercial vehicles, truck and buses. Available for test drives are some of Mitsubishi Philippines' best-selling models like the variable geometry turbo-equipped Montero Sport and Strada and the 2010-2011 Car of the Year's Best Compact Crossover awardee, the ASX.

Once a car buyer has chosen from the array of Mitsubishi vehicles at the site, he or she can select a financing plan from Mitsubishi's partner banks: Banco de Oro, BPI Family Savings Bank and PS Bank to avail of the special low "all-in" financing plans. The banks will also give away exclusive freebies like fuel cards and even portable GPS navigation systems to customers whose financing application are approved on-site.

Trade-in deals will also be entertained at the expo with Mitsubishi Philippines giving a P30,000 incentive over the appraised value of any car brand. If the car being traded-in is a Mitsubishi, an additional P20,000 will be given as a loyalty incentive. Aside from these exclusive offers, Expo car buyers can get additional discounts of as much as P50,000 and a chance to win in the P500,000 cash back raffle.

Mitsubishi Philippines will also provide a free 12-point check-up on all Mitsubishi vehicles while owners with navigation system such as the Galant, ASX and Montero Sport can avail of the free navigation map update.

On May 14, Mitsubishi Philippines will host the numerous Mitsubishi clubs that have been invited and are expected to gather in and around the venue that day which will be capped off by a free concert and a live remote broadcast with 99.5 RT.

Motorsport and rally fanatics will also appreciate the Racing Lancer replica, which made its debut at the 2009 Argentina Dakar Rally that Mitsubishi Philippines will display at the show while video gamers will surely enjoy the Lancer Evolution X gamecar simulator where they can play the popular Gran Turismo 5 inside a real Evolution X. To make things more exciting, Mitsubishi Philippines will host a Gran Turismo 5 competition everyday at the venue, with the overall championship taking place on the last day of the Expo on May 15.

"We have organized the Mitsubishi Motors Expo to express our gratitude to our customers in making Mitsubishi a strong and trusted brand in this market," said Hikosaburo Shibata, Mitsubishi Motors Philippines' new president and chief executive.

Porsche launches diesel-fueled Panamera
View other articles about:
Read the Story →
This article originally appeared on Topgear.com. Minor edits have been made by the TopGear.com.ph editors.
Share:
Retake this Poll
Quiz Results
Share:
Take this Quiz Again
TGP Rating:
/20