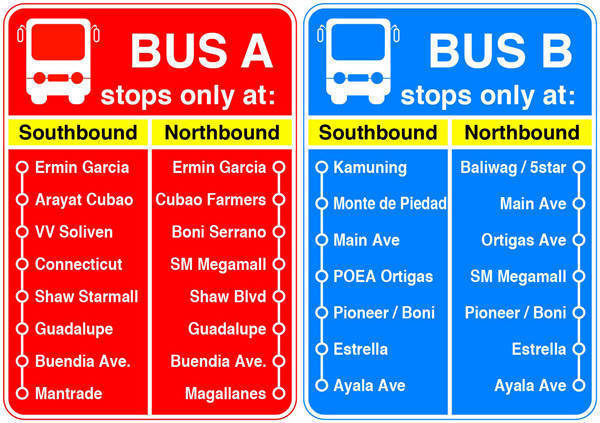 In September, the Metropolitan Manila Development Authority revealed that it was planning to introduce a new bus-stop scheme along EDSA to alleviate the traffic condition on the metro's main thoroughfare.

Well, that time has come as the agency is implementing its bus-segregation program starting today, December 18, which, according to the MMDA, will cover all 3,100 buses plying EDSA.

"We have given bus operators sufficient time to have their bus units tagged, so buses that have not been tagged, or those that have no stickers, will not be allowed on EDSA," said MMDA chairman Francis Tolentino.

The bus-segregation scheme will reportedly be enforced along the stretch of EDSA from the Magallanes Interchange to the East Avenue intersection (and vice versa). To help commuters understand the new scheme, signs (like the ones above) have been put up indicating what kind of bus stops at each, um, bus stop.

Under the program, buses that ply EDSA have been tagged as Bus A, B or C "to minimize traffic congestion along the thoroughfare, particularly in loading and unloading areas."

A and B buses can only use their designated A and B bus stops, respectively, while C buses will be allowed to use all bus stops.

Bus A will stop at the following loading/unloading bays:

(Bus A stops are painted red.)

Bus B will stop at the following loading/unloading bays:

(Bus B stops are painted blue.)

"We are optimistic that this enhanced bus-segregation system will decongest EDSA significantly," Tolentino said.

The MMDA chief added that his agency's dispatchers have already been instructed not to allow bus units without stickers to leave the four Organized Bus Route terminals.

Just a thought: Before they conceptualized this bus-segregation scheme, hadn't it occurred to them that it might probably be the fact that there are 3,100 buses using EDSA, that could be the root of the problem in the first place?

Usain Bolt-approved 'gold' Nissan GT-R goes for $187,100
View other articles about:
Read the Story →
This article originally appeared on Topgear.com. Minor edits have been made by the TopGear.com.ph editors.
Share:
Retake this Poll
Quiz Results
Share:
Take this Quiz Again
TGP Rating:
/20