If you're planning to visit Malate, Manila, either today or tomorrow, it would be best if you reschedule your trip to some other day as the film shooting for The Bourne Legacy takes place in Remedios Circle on those days.

On January 18 and 19, from 5am to 6pm, a section of Remedios Circle and J. Bocobo Street will be closed to traffic. 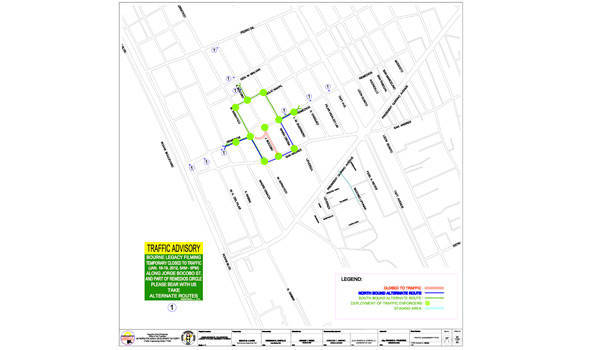 Northbound motorists on Remedios Street coming from Roxas Boulevard and headed toward Taft Avenue are advised to turn right at M. Adriatico, take a left at San Andres and another left at Maria Orosa before turning right at Remedios Street.

Southbound motorists on Remedios Street coming from Taft Avenue and headed towards Roxas Boulevard, meanwhile, are advised to turn right at Maria Orosa, left at Julio Nakpil and take another left at M. Adriatico to get back on Remedios Street by taking a right. Motorists on J. Bocobo coming from Pedro Gil and headed towards Roxas Boulevard are also advised to take the same route by turning right at Julio Nakpil and left at M. Adriatico.

On January 28 to 30, the shoot will be held in the Tramo area of Pasay City. 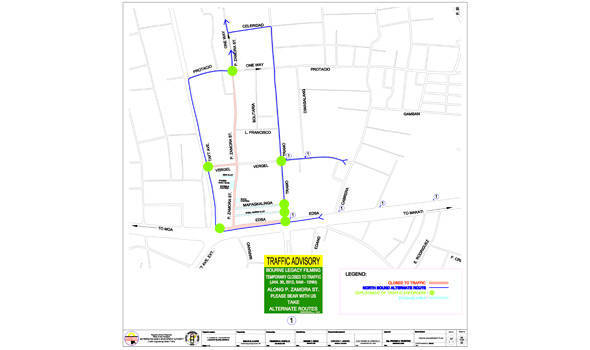 On those days, Aurora Boulevard in front of the Five Star Bus Company Liner terminal will be closed to traffic. Motorists coming from Airport Road and Andrews Avenue are advised to turn right at St. Augustine and then left at St. Francis to cross the Maricaban Bridge and continue on Clemente Jose straight toward EDSA. Motorists can also cross the Tramo Bridge on Aurora Boulevard and turn right at Edang Pinagbarilan and continue straight toward EDSA.

On January 28 and 29, the northbound outer lane of EDSA from Taft Avenue to Aurora Boulevard will be closed to traffic.

Northbound motorists going toward EDSA are advised instead to follow the abovementioned directions while those coming from the SM Mall of Asia are advised to go through Sen. Gil Puyat Avenue instead.

On January 30, from 5am to 12nn, P. Zamora Street from EDSA to Protacio Street, Vergel Street from Taft Avenue to P. Zamora and the southbound outerlane of EDSA from Tramo to Taft Avenue will be closed to traffic.

Southbound motorists headed towards the area are advised to turn right at Tramo, take a left at Celeridad before turning right at P. Zamora to reach their destination. They may also turn left at Taft Avenue and take a right turn to Protacio  before turning left at P. Zamora.

Metropolitan Manila Development Authority traffic enforcers will be deployed along the designated alternate routes to assist motorists during the days of the shoot.

GT Academy graduates finish third in class at Dubai 24 Hours
View other articles about:
Read the Story →
This article originally appeared on Topgear.com. Minor edits have been made by the TopGear.com.ph editors.
Share:
Retake this Poll
Quiz Results
Share:
Take this Quiz Again
TGP Rating:
/20