For the ASEAN market
by Patrick Everett Tadeo | Dec 21, 2012
CAR BRANDS IN THIS ARTICLE 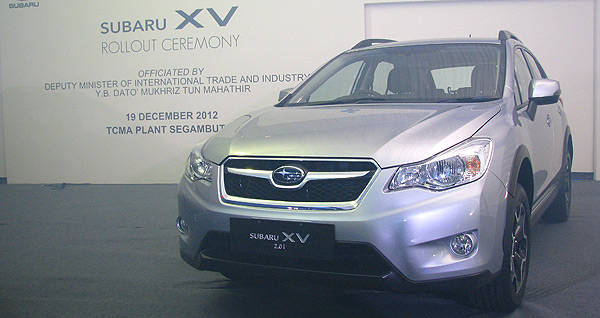 Motor Image, a company of Tan Chong International Limited, has officially rolled out the first Subaru XV assembled at its Kuala Lumpur facility in Malaysia. In partnership with Fuji Heavy Industries, the manufacturer of Subaru, the assembly facility "is the cornerstone of a series of bold moves designed to significantly expand Motor Image's presence in the region."

With a production capacity of 5,000 units annually, the facility will produce the 2.0-liter i and i-Premium variants not just for the Malaysian market but for Indonesia and Thailand as well. In addition, roughly 40 percent of the parts used to assemble the XV are sourced locally within Malaysia.

According to Motor Image, at least 65 percent of the vehicles assembled in the facility will be for export, while the rest will be distributed locally. With the introduction of the Malaysia-assembled XV to the three above-mentioned markets, Motor Image expects the revenues of its local subsidiaries "to increase more than tenfold within the first year."

"This development is a significant milestone for us, as the ability to locally assemble Subaru cars in Malaysia allows us to leverage inter-ASEAN trade agreements, giving us an advantage in our plans to widen our vehicle distribution network," said Tan Chong International Limited executive director Glenn Tan. "This initiative also enhances our capability and versatility, thus strengthening our presence as a reliable automotive group in Asia."

When asked if the assembly facility could one day produce left-hand-drive models, Tan shared that setting up the necessary tooling to make it possible "is a very complicated process" and that the sales volume for left-hand-drive markets like the Philippines isn't enough to justify the production.

With the price of the Philippine-market XV starting at just P1.398 million, it certainly seems like we're getting a far better deal than our ASEAN neighbors.

Subaru PH on target to end 2012 with sales of 1,800 units
View other articles about:
Read the Story →
This article originally appeared on Topgear.com. Minor edits have been made by the TopGear.com.ph editors.
Share:
Retake this Poll
Quiz Results
Share:
Take this Quiz Again
TGP Rating:
/20