Those nagging thoughts at the back of your mind
by Tracy Carpena | Oct 16, 2014 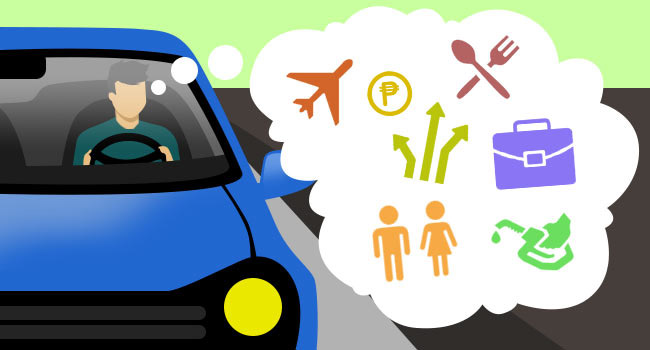 What do you usually think about while you're driving? Do you often debate with yourself about whether you should blow a month's salary on those aftermarket wheels or just keep your savings intact?

We feel you. We understand that you feel worse every day, especially when the car that regularly parks beside you is sporting the shoes you covet.

If it's any consolation, you are not the only motorist having that nagging thought of spending versus saving while you're behind the wheel. In fact, choosing whether to splurge or to keep your hard-earned money is the most important decision that a Filipino motorist makes every day.

This is according to a study conducted by the Philippine Survey and Research Center (PSRC), which was tapped by Pilipinas Shell for its "Shell FuelSave Good Choice Report." The research firm presented the study--titled "The 10 most important decisions Filipino motorists make in one day"--at Pilipinas Shell's announcement last night of the winners of its FuelSave Good Choice Driving Challenge.

But before PSRC revealed the results and discussed the methodologies of the study, Pilipinas Shell asked the media to play a Family Feud-like game to guess the 10 significant decisions motorists make. Hands shot up and several possible decisions were cited, including "Should I take EDSA or C5?" and "Which car should I drive today?"

But the group was only able to correctly identify four items, namely:

* Should I go to school/work or not?

* Where should I gas up?

* Which route should I take?

* What should I eat?

It turns out Filipino motorists not only think about the pressing driving decisions they make while behind the wheel. PSRC revealed that "where to gas up" is the most common decision point among Filipino motorists, with 83% of the respondents citing it. Meanwhile, 77% of the respondents identify deciding whether to "splurge or save" as one of the decisions they make every day.

When the researchers probed their subjects, however, it was revealed that they consider other decisions to be more important than some. And it is through this investigation--by straightforwardly asking questions (direct importance) and statistically deriving answers (derived importance)--that they were able to identify the list below. So when arranged by importance, making the choice of where to gas up slips a few notches on the list.

Ladies and gentlemen, here are the 10 most important decisions that Filipino motorists make every day (arranged according to importance, with number one as the most significant), based on PSRC's study:

1. Should I splurge or save?

2. Should I help with my family finances or consider my needs first?

4. Should I look at the price first before I consider quality?

5. Which career should I pursue?

7. Which route should I take?

8. Should I break up with my partner?

9. Should I go abroad or stay in the country?

The study was conducted among 500 motorists, aged 18 to 64, from Metro Manila, Dagupan City, Batangas City, Metro Cebu and Davao City. Commercial drivers, private motorists, moms and college students who drive at least once a week made up the respondent pool.

How about you? Which decisions are constantly in your subconscious while you're driving?

How to survive the final round of the 2014 Vios Cup this weekend
View other articles about:
Read the Story →
This article originally appeared on Topgear.com. Minor edits have been made by the TopGear.com.ph editors.
Share:
Retake this Poll
Quiz Results
Share:
Take this Quiz Again
TGP Rating:
/20