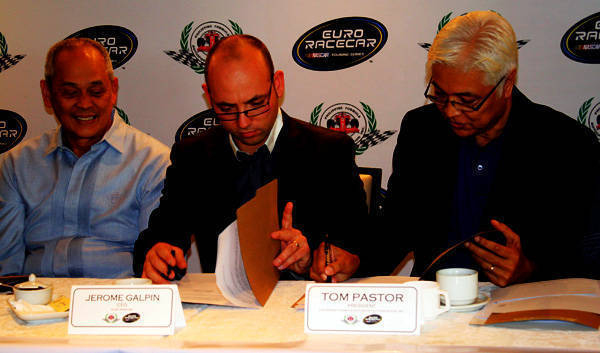 The deal is sealed: The Philippine Formula Autosports Foundation (PFAFI) and the Euro Racecar series of the National Association for Stock Car Auto Racing (NASCAR) have inked a partnership to stage a Euro Racecar NASCAR race in the country--a first in Asia--in November 2013.

Tom Pastor, PFAFI president, is equally thrilled to have the race staged in the country. "We can't wait to get those engines rumbling as we race for that checkered flag in November," said Pastor. "It's our chance to bring Philippine motorsports back onto the world map of car racing."

In addition to this brewing excitement for next year, Filipino race driver Enzo Pastor has opened new opportunities to any driver who wants to be part of the race. The slots for Pastor's partner and two backup drivers are vacant for this Euro Racecar NASCAR race. Enzo is Tom Pastor's son.

"This is a historic event. We hope everybody will watch this," said Willie Dandan, PFAFI marketing head. "It's time for the Filipinos to shine."

The Euro Racecar series is basically a NASCAR-style, lower-level race held at European circuits. Its inaugural season was held in 2009. In 2010, the FIA gave the series its stamp of approval to make it a legitimate international race series. The champion of the series gets to compete in NASCAR's annual Toyota All-Star Showdown, together with top drivers from NASCAR's other lower-level series.

ADB lending PH $300M to replace gasoline tricycles with e-trikes
View other articles about:
Read the Story →
This article originally appeared on Topgear.com. Minor edits have been made by the TopGear.com.ph editors.
Share:
Retake this Poll
Quiz Results
Share:
Take this Quiz Again
TGP Rating:
/20