Official statement from the family of Maico Buncio and Suzuki Philippines

On the death of the young motorcycling champ
May 16, 2011
CAR BRANDS IN THIS ARTICLE 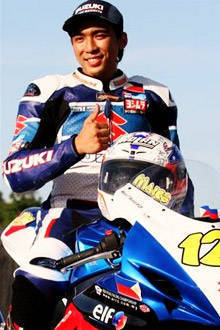 As the Philippine motorsports community mourns over the passing of motorcycle racing champion, Maico Buncio, more questions are raised over the cause of his death.

Here's an excerpt of the official statement issued by Buncio's family and Suzuki Philippines.

"The Philippines' fastest man on two wheels, record-breaking biking champion Maico Greg Buncio, died Sunday afternoon (May 15, 2011) after suffering serious injuries from a crash during the qualifier race the day before in the Clark Speedway Circuit. Traveling at high speed, his bike had slipped into loose gravel on the shoulder of the speedway. Buncio was thrown off 100 meters from his bike, crashing into an unfinished barrier on the speedway where a protruding steel bar punctured his body and damaged his kidney and liver. He was rushed to a nearby hospital before being brought to the UST Hospital early morning of Sunday, but the doctors' efforts were in vain, and he passed away at 3:57pm.

"Buncio is this year's Golden Wheel Awards' Driver of the Year. The 22-year-old motorcycle rider is a member of Team Suzuki Pilipinas and is the country’s official representative to the Asia Road Racing Championships.

"His body lies in state at Loyola Memorial Chapels Guadalupe. Interment details to be announced later."

The statement was disseminated by Eilleen Esteban, corporate communications manager of Suzuki Philippines.

TopGear.com.ph has yet to receive a reply from the Clark International Speedway regarding the track's alleged "unsafe conditions," which was said to have caused Buncio’s accident.

2011 Driver of the Year dies after crash in Clark
View other articles about:
Recommended Videos
Read the Story →
This article originally appeared on Topgear.com. Minor edits have been made by the TopGear.com.ph editors.
Share:
Retake this Poll
Quiz Results
Share:
Take this Quiz Again
TGP Rating:
/20