PIMS 2012: Where to find the booth of every car brand

On Thursday, August 16, the doors of the World Trade Center in Pasay City will open for the 4th Philippine International Motor Show. As usual, we expect Filipino car enthusiasts to flock to this biennial event. If you're among those planning to go to this Chamber of Automotive Manufacturers of the Philippines-organized car show, we advise you to familiarize yourself with the final floor plan, as released by the organizers themselves.

From the floor layout--the main entrance is at the very bottom--we can see that visitors will immediately be greeted by the two German premium brands, Mercedes-Benz and BMW. These two Teutonic carmakers will sandwich Korean automaker Kia. (BMW and Kia, by the way, are affiliates here in our market, both brands distributed by companies owned by businessman Jose "Pepito" Alvarez.)

In the middle of the display hall will be Isuzu and Toyota. The latter would have had a really big, prominent area at the center if it didn't divide its floor between Toyota and Lexus.

On the leftmost side will be Suzuki and Chrysler/Jeep/Dodge, while Honda and Mitsubishi will camp on the rightmost side.

At the back will be the Nissan booth, to be shared by the brand's two Philippine distributors. The struggling Japanese automaker will be joined in the rear by JMC and Daewoo Bus.

The floor plan below also shows the respective schedules of the media presentations (August 16) of the above-mentioned car brands. This creates a bit of a problem for some. For instance, we hear that Chrysler/Jeep/Dodge will have one really special vehicle on display, but won't be able to take its veil off until the scheduled 5:30pm media presentation.

Anyway, we'll see you at the show (which will run, by the way, until Sunday, August 19). Let's hope this will be an epic one. 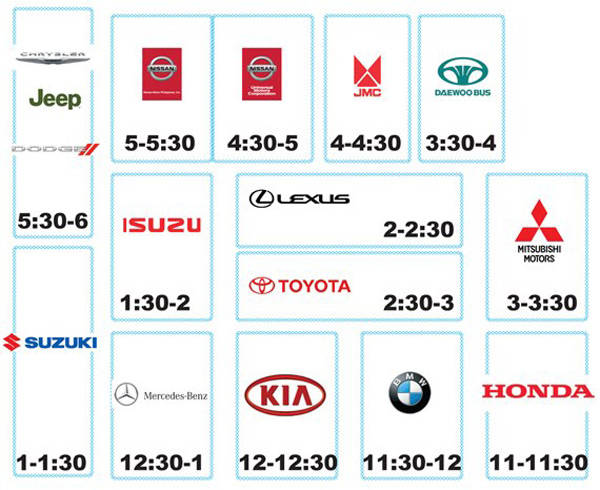 Ford PH's July sales driven by demand for all-new Ranger, Fiesta
View other articles about:
Read the Story →
This article originally appeared on Topgear.com. Minor edits have been made by the TopGear.com.ph editors.
Share:
Retake this Poll
Quiz Results
Share:
Take this Quiz Again
TGP Rating:
/20