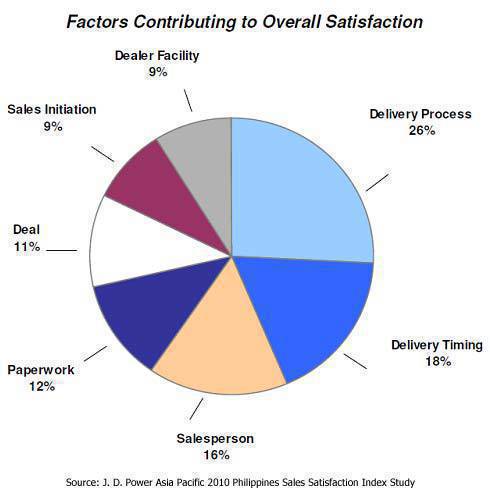 At the dealership
•    Five percent of customers waited before being greeted upon entering a dealership
•    Among those who had to wait, customers said the waiting time averaged 9.5 minutes before receiving a greeting from the sales staff versus only 7.7 minutes in 2009

Test drive
•    Only 76 percent of customers were offered test drives this year versus 84 percent offered in 2009
•    The sales satisfaction index among customers who conducted a test drive during the sales process is higher at 826 points (out of 1,000 points) compared to those who were not able to take a vehicle out on a test drive (797 points)
•    Nine percent of customers were not able to take a vehicle for a spin due to a lack of test units. This number is higher than the six percent posted in 2009

Vehicle delivery
•    New-car owners who said they received their new vehicle within one day increased to 39 percent, up four percentage points from last year
•    The percentage of new-car owners who had to wait more than one week rose to 13 percent this year from only eight percent in 2009

Were you satisfied with the sales process in your latest car purchase? Share your thoughts using the comment box below.

Mazda, Ford top sales satisfaction survey in the Philippines
View other articles about:
Recommended Videos
Read the Story →
This article originally appeared on Topgear.com. Minor edits have been made by the TopGear.com.ph editors.
Share:
Retake this Poll
Quiz Results
Share:
Take this Quiz Again
TGP Rating:
/20