Pope Francis may ditch gas-fed Popemobile for pedal-powered one 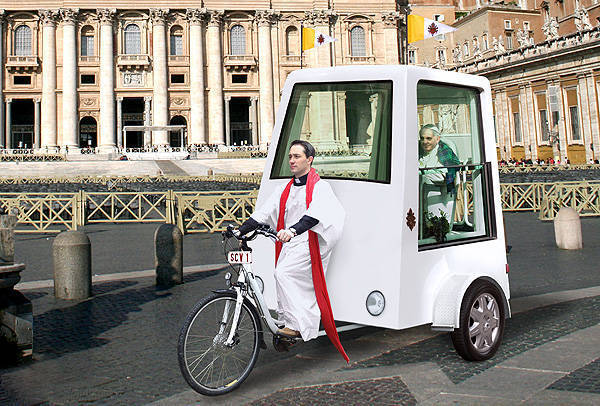 Pope Francis is making another step toward cementing his image as the people's pontiff by being the first head of the Catholic Church to ride in the first-ever, pedal-powered Popemobile.

Some of the equipment the pedal-powered Popemobile is fitted with are:

* Roof-mounted solar panels to power the air-conditioning and trickle-charge the main battery;

* An operational speed of 10kph with emergency power train boost (with a top speed 60kph);

* Low-voltage spotlights in the floor and roof compartment to illuminate the vehicle's passenger;

"Cycling is the great leveler--a means of transport as serene as it is practical, and an entirely appropriate way for a Pope to travel," said the pedal-powered Popemobile's designer, Yannick Read. "The green credentials of the vehicle dovetail perfectly with Pope Francis's image as the people's pontiff."

According to the ETA, if the design plans receive final approval today, April 1, the Pope will take delivery of the pedal-powered Popemobile later this year.

This being April Fools' Day, we'll take this one with a grain of salt.

Precision driver Russ Swift to play with Subaru BRZ at MIAS
View other articles about:
Recommended Videos
Read the Story →
This article originally appeared on Topgear.com. Minor edits have been made by the TopGear.com.ph editors.
Share:
Retake this Poll
Quiz Results
Share:
Take this Quiz Again
TGP Rating:
/20