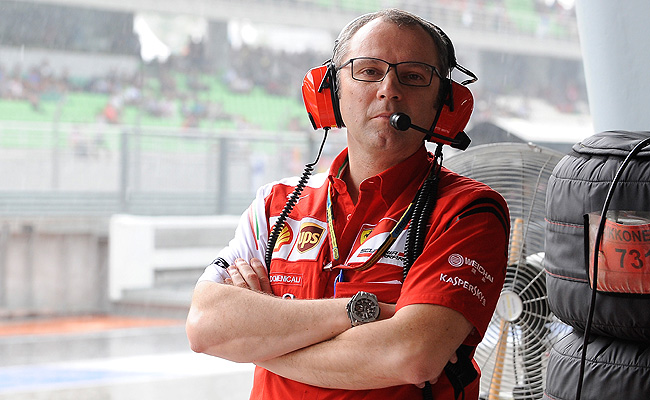 It had to happen sooner or later.

With Ferrari's lackluster showing the past few seasons in Formula 1--highlighted no less by former perennial backmarker Force India soundly beating the Italian outfit so far this season--Stefano Domenicali has decided to resign from his position as team principal.

"There are special moments that come along in everyone's professional life, when one needs courage to take difficult and very agonizing decisions," Domenicali said in a statament. "It is time for a significant change. As the boss, I take responsibility--as I have always done--for our current situation. This decision has been taken with the aim of doing something to shake things up and for the good of this group of people that I feel very close to. I hope that very soon, Ferrari will be back where it deserves to be. I only regret that we have been unable to harvest what we worked so hard to sow in recent years."

Domenicali joined Ferrari in 1991 and assumed the position of sporting director in 2003. With Jean Todt's departure from the team after the 2007 season, Domenicali was tasked to head Scuderia Ferrari from the 2008 season onward. Although the team secured the constructors' title in Domenicali’s first year as team boss, Ferrari has since failed to capture either the constructors’ or the drivers’ title for the past five seasons, with this season looking no different.

"I thank Stefano Domenicali, not only for his constant dedication and effort, but also for the great sense of responsibility he has shown, even today, in always putting the interests of Ferrari above all else," Ferrari president Luca di Montezemolo said after Domenicali submitted his resignation. "I hold Domenicali in esteem and I have watched him grow professionally over the 23 years we have worked together. I now wish him every success for the future."

Replacing Domenicali is Marco Mattiacci, who has been with Ferrari since 1999 and once served as chief executive officer of Ferrari Asia Pacific from 2006 before assuming the same position in North America in 2010.

All-new Nissan Murano to debut at 2014 New York Auto Show
View other articles about:
Read the Story →
This article originally appeared on Topgear.com. Minor edits have been made by the TopGear.com.ph editors.
Share:
Retake this Poll
Quiz Results
Share:
Take this Quiz Again
TGP Rating:
/20