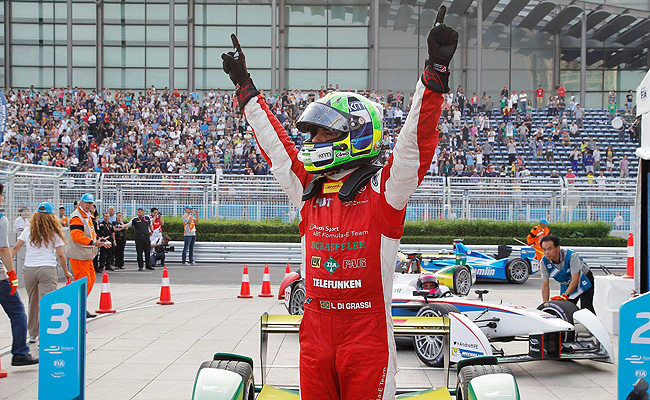 Ex-Formula 1 driver Lucas di Grassi, who is driving for Audi Sport ABT, has entered the record books for becoming the first driver to win the first-ever Formula E ePrix race held in Beijing this past weekend.

Di Grassi's victory came as the race's two front-runners--e.dams-Renault's Nicolas Prost and Venturi's Nick Heidfeld--collided in a last-corner battle for the lead, taking both their cars out. Heidfeld was attempting to overtake Prost through the last corner, but as the latter attempted to defend his position, both their wheels collided, sending the former crashing into a barrier and flipping his car twice before it crashed back upside down onto the ground. Di Grassi took advantage of the opportunity to finish the race in first place.

"Firstly, I'm happy Nick (Heidfeld) is okay, and it shows how safe these cars are," di Grassi said after the race. "To win the race is like a dream come true. I was lucky to be in the right place at the right time. The team did a great job all through practice and qualifying. Yes, we made a few mistakes, but overall I’m extremely happy to be the first-ever winner of a Formula E race."

Ferrari to release limited-edition model to mark 60th US anniversary
View other articles about:
Read the Story →
This article originally appeared on Topgear.com. Minor edits have been made by the TopGear.com.ph editors.
Share:
Retake this Poll
Quiz Results
Share:
Take this Quiz Again
TGP Rating:
/20