Also its 1st international title on a racetrack
Oct 17, 2014 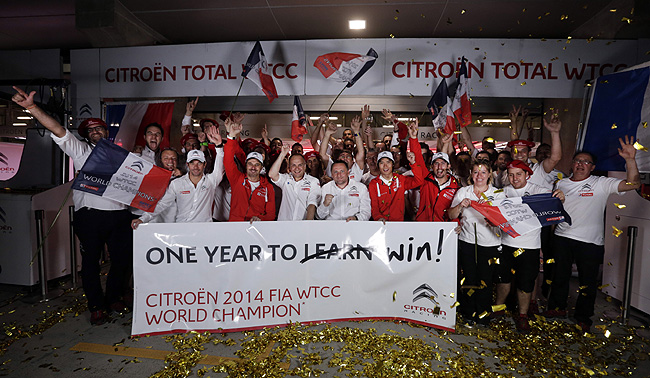 In only its first year in the World Touring Car Championship, Citroen has claimed the 2014 manufacturers' title with a 274-point lead over second-placed Honda with only four races left on the calendar.

A 1-2-3-4 finish by Citroen in the first race at the Shanghai International Circuit in China led by Jose Maria Lopez and followed by local racer Ma Qing Hua, four-time champion Yvan Muller and nine-time WRC champion Sebastien Loeb secured for the French carmaker the title in only its maiden season in the series. The second race saw Lopez finish in third place, followed by Loeb in fourth and Hua in fifth. Loeb, however, was handed a 30-second penalty for colliding with Muller, dropping him out of the top 10.

Lopez's points haul for both races extended his lead in the drivers' championship by 93 points against teammate Yvan Muller, who lies in second place.

"Citroen is extremely proud of these victories and this world title," said Citroen marketing, communications and motorsports director Julien Montarnal. "The professionalism, energy and passion of Citroen Racing has enabled us to obtain results that have gone way beyond our wildest dreams. We gave ourselves a year to learn about the category and, in the end, it has taken us a year to win. Winning the title in Shanghai in front of all these fans, at such an extremely popular event, has been the perfect scenario. China is our biggest market, as one in every four Citroen cars is sold here. All our guests, dealers and customers alike have been able to appreciate Citroen's technological expertise."

Do you think Citroen will ever enter the Philippine market?

We drive the newly launched Honda Brio twins in the Bicol region
View other articles about:
Read the Story →
This article originally appeared on Topgear.com. Minor edits have been made by the TopGear.com.ph editors.
Share:
Retake this Poll
Quiz Results
Share:
Take this Quiz Again
TGP Rating:
/20