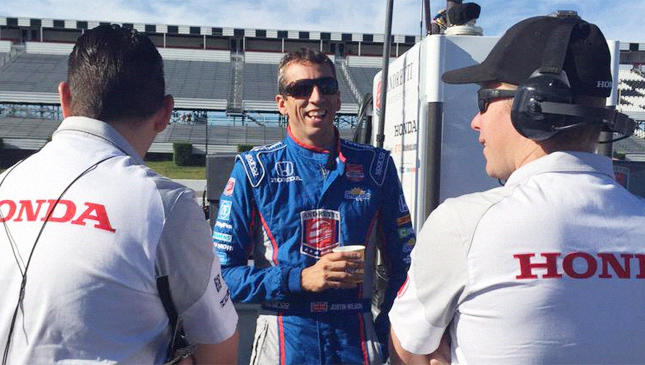 IndyCar racer Justin Wilson has passed away after sustaining a head injury at Sunday's ABC Supply 500 at Pocono Raceway, according to a report by the Associated Press. His passing was announced by IndyCar, followed by a statement from his family earlier today. Wilson was struck in the head by debris that had come loose from a separate car. His vehicle crashed into an interior wall, after which he was immediately airlifted to a nearby hospital for treatment.

The British driver was a former Formula 1 racer before deciding to take his talents to the US back in 2003. He once finished fifth in the Indianapolis 500, and once won the 24 Hours of Daytona as a driver for Michael Shank Racing. Wilson was racing for Andretti Autosport when he sustained the fatal head injury.

A statement from Andretti Autosport called Wilson a tremendous racer and respected member of the team. "While Justin was only part of the Andretti lineup for a short time, it only took a second for him to forever become part of the Andretti family," the team said. "His life and racing career are a story of class and passion surpassed by none. Our thoughts and prayers remain with the Wilson family and fans worldwide. Godspeed, JW."

Fellow IndyCar driver Ed Carpenter was present during the announcement, calling Wilson "a friend of everyone" at the paddock. "Days like this are extremely hard on all of us," Carpenter said. "Justin was a great professional driver and was extremely good at his craft. Beyond that, he was a great guy. One of the few, if not the only, guys who really was a friend of everyone in the paddock. Everyone respected him for the way he carried himself."

Wilson is the second IndyCar racer in four years to lose his life from track-related injuries; the last one was Dan Wheldon in 2011. Wilson is survived by his wife and two daughters. We all know that racing is a dangerous sport, no matter how many precautions a driver and his team take. Nevertheless, it's always sad to see a racing talent gone too soon.

Get a McDonald's drive-thru VIP sticker: Here's the lucky hour for August 26
View other articles about:
Read the Story →
This article originally appeared on Topgear.com. Minor edits have been made by the TopGear.com.ph editors.
Share:
Retake this Poll
Quiz Results
Share:
Take this Quiz Again
TGP Rating:
/20