A flurry of activities stretching over 10 days
by Patrick Everett Tadeo | Aug 20, 2014 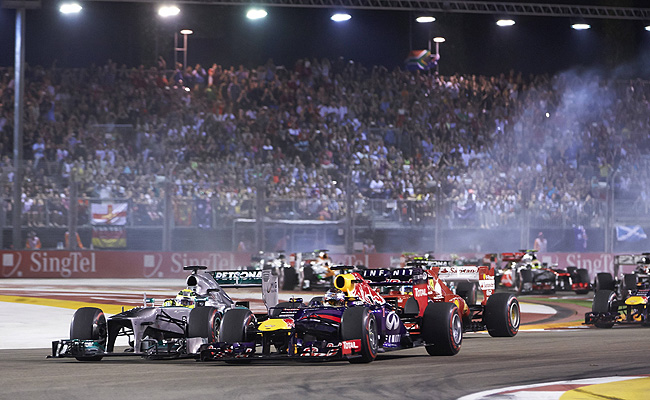 The Singapore Tourism Board, the organizer of the Singapore Grand Prix--the lone nighttime street race on the Formula 1 calendar--is getting ready for the 2014 staging of the race, which will be held in the city state on September 21.

The 2014 race will be the seventh to be held at the 5km Marina Bay Street Circuit. To drum up interest in this year’s event, the Singapore Tourism Board launched its "One Stop Non Stop" theme, which aims to give the best lifestyle experiences the country has to offer.

While an F1 weekend lasts for three days, from Friday to Sunday--or September 19-21 in the Singapore Grand Prix's case this year--the Singapore Tourism Board's "One Stop Non Stop" campaign will actually start a week earlier on September 12.

In line with the theme, more than 70 events and activities have been lined up to pique the interest of the race's attendees, from cultural exhibits to parties at exclusive clubs to concert performances by today’s popular artists. A look back at Singapore's motorsport history will be the highlight of the National Museum of Singapore, for example.

John Legend and Jennifer Lopez will headline the post-race concert. Supporting them will be Carlos Castaño, an independent Filipino artist who has grown a following in the Singaporean community. If partying with the F1 drivers after the race is your thing, we've been told that they will be at the ultra-exclusive Amber Lounge where an individual pass alone costs 1,200 Singaporean dollars (P42,000), although this supposedly comes with a "free flow of drinks."

In addition, the race ticket holders are entitled to exclusive deals and discounts at various establishments, like a 50% discount on the Dragon Package of the MegaZip adventure park.

To help race attendees keep track of the flurry of activities happening from September 12 to 21, the "One Stop Non Stop" Singapore Grand Prix guide will be available at select distribution points in the city.

Tickets to the 2014 Singapore Grand Prix may be booked through local ticketing agent Red Rock Travel.

Top Gear PH is 4th best-selling local magazine on Buqo newsstand
View other articles about:
Read the Story →
This article originally appeared on Topgear.com. Minor edits have been made by the TopGear.com.ph editors.
Share:
Retake this Poll
Quiz Results
Share:
Take this Quiz Again
TGP Rating:
/20