Report: Congressman wants Cebu to host a leg of Formula 1 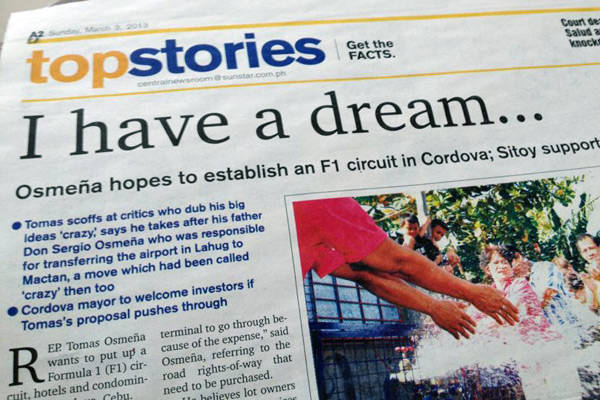 According to the Sun.Star newspaper, Rep. Tomas Osmeña, a congressman from the second district of Cebu, has made known his intent to have a Formula 1 race in Cordova, Cebu. The paper wrote that the politician has already "shared the idea with some investors." This came in the wake of Osmeña's proposal to move the Mactan International Airport to Cordova, which expectedly found much resistance.

Part of Osmeña's plan is to build hotels, condominiums and shops around the F1 circuit.

"This could rival the Sinulog," the congressman was quoted by the paper as saying.

The newspaper also added that Osmeña "doesn't mind being labeled 'crazy' for his big ideas."

Indeed, when we shared the news on our Facebook page, some people emphatically said: "Dream on."

"(F1 circuit designer) Hermann Tilke flew into the country to assess the possibility of creating an F1 racetrack," Elbert Cuenca pointed out. "That plan was shelved, to think it was Ramon Ang who was involved in the project. Osmeña has no idea of what it takes. For starters, he doesn't know he has to sell his soul to Formula 1 Supremo Bernie Ecclestone."

Well, as for us, we're all for anything that will put us on the map of international motorsports. And now may be a good time to discuss the possibility of holding an F1 race in the Philippines--whether in Cebu or somewhere else--after Filipino-Swiss racer Marlon Stockinger announced that he had been given a rare opportunity to drive Lotus F1's car.