Three Filipino teams are vying for the honor of winning in the first Shell Eco-Marathon Asia for making the most energy-efficient vehicle in a controlled environment.

Select students and professors from the Don Bosco Technical College of Mandaluyong, Mapua Institute of Technology and the University of Santo Tomas sacrificed their summer vacation to prepare their respective teams and cars in time for the competition at the Sepang International Circuit in Kuala Lumpur, Malaysia next month.

"The Shell Eco-marathon is a platform for students to let their imaginations run wild," Shell vice president for communications Roberto Kanapi said. "The concept is simple: to design and build from scratch a vehicle that travels the farthest distance using the least amount of energy. It is Shell's contribution in encouraging the creativity and passion of the youth to help meet the energy challenge."

Team Don Bosco created "Grigo," named after the guardian dog of St. John Bosco. It will be driven by Angelo Blanco and Jason de Guzman, with Erica Vicera as reserve driver.

Team University of Santo Tomas' Richard Ching Lao and Tim Mervin Orille will be behind the wheel of the "Tiger 400," which is named in honor of the university's 400th anniversary in 2011.

The Philippine teams are competing in the Futuristic Prototype class where the primary design is aimed at reducing drag and maximizing efficiency.

The teams from the Philippines will compete with 104 other teams from the Asian region. Toughest contenders come from Pakistan, which is fielding 28 different teams; and Singapore, which has been sending various teams to Shell Eco-Marathon Europe in the past three years.

The three vehicles which will represent the Philippines at the first Eco-Marathon Asia will be on display at the Bonifacio High Street in Taguig City from June 10 to 13.

This is not a bug lost at the Batangas Racing Circuit 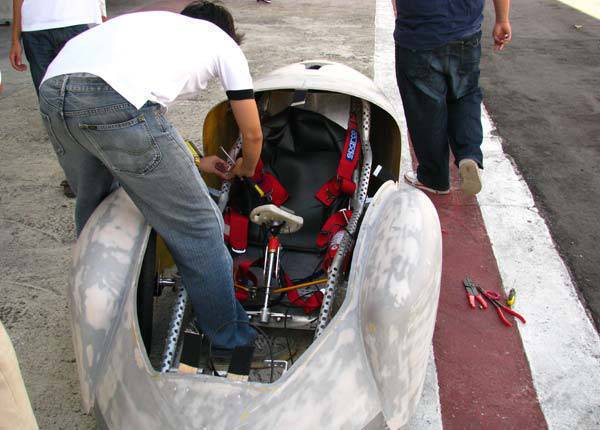 See? It's one of the Philippines' entries to this year's Shell Eco-Marathon Asia. Root for your bet now!

Pilipinas Shell is currently searching for the Philippines Smartest Drivers! Click this link to join the contest.

Italy's Ducati Multistrada 1200 arrives in the Philippines
View other articles about:
Read the Story →
This article originally appeared on Topgear.com. Minor edits have been made by the TopGear.com.ph editors.
Share:
Retake this Poll
Quiz Results
Share:
Take this Quiz Again
TGP Rating:
/20