Know more about the van way before its official launch
Jul 27, 2010
CAR BRANDS IN THIS ARTICLE 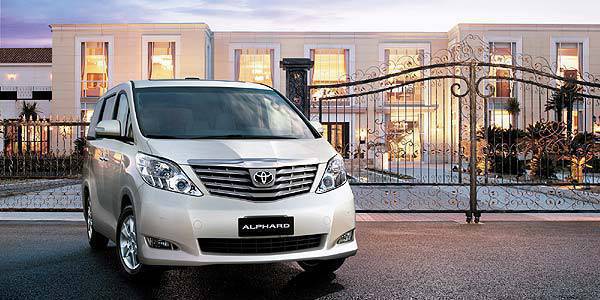 A spec sheet acquired by TopGear.com.ph from a Toyota marketing professional a week prior to the launch showed the Japanese carmaker is bringing in the gasoline-fed 2.4-liter variant of the minivan, which comes with a four-speed automatic transmission. The new Alphard packs the maximum power of 165 horses and produces a maximum torque of 227 Newton meters.

With a length of 4,850 millimeters, width of 1,830mm and height of 1,905mm, the Toyota Alphard is slightly bigger and definitely taller than the P2-million-plus Toyota Previa.

The Alphard minivan is ideal for small to medium families with a seating capacity for seven people. The driver's seat may be adjusted in six ways with a memory feature, while the front passenger seat is adjustable in four ways with a power Ottoman feature. Middle-row passengers can enjoy the Alphard's four-way captain seats with Ottoman and footrest. Seats are wrapped in natural leather.

For entertainment, Toyota has packed an in-dash six-CD changer, an MP3 with auxilliary connection and a Bluetooth-capable audio system in the Alphard.

The minivan's safety features include an anti-lock brake system with electronic brake distribution, and SRS airbags for the driver and passenger as well as curtain shields for front and rear passengers.

Other features of the all-new Alphard include a cruise control system and a dual moonroof.

Unfortunately, we only have one photo of the new Alphard to share right now but we promise an entire gallery devoted to this van next week. The new Alphard, which will be officially launched on August 2, will be available in the following body colors: White Pearl, Silver Metallic and Raven Black.

Toyota Motor Philippines has yet to reveal the price of the new Alphard. Care to guess? Post your opinion using our comment box below.

SONA 2010: 6 points that spell 'better future' for the auto industry
View other articles about:
Read the Story →
This article originally appeared on Topgear.com. Minor edits have been made by the TopGear.com.ph editors.
Share:
Retake this Poll
Quiz Results
Share:
Take this Quiz Again
TGP Rating:
/20