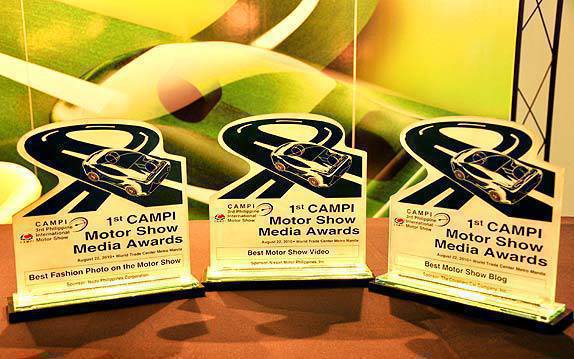 TopGear.com.ph won three of the five special recognitions given in the 1st CAMPI Motor Show Awards at the Philippine International Motor Show.

Blogger Dinzo Tabamo, who is also the associate features editor of Top Gear Philippines magazine, received the Best Blog on the Motor Show award for his Head Over Heels piece, Things Have Changed.

Photographer Mikko David earned the Best Fashion Photo on the Motor Show trophy for the image featured in TopGear.com.ph's PIMS 2010: Hottest Babe At The Motor Show.

The website''s Video of the Week: PIMS 2010 feature, produced by Antonio Ongchap Jr. and Ron Jay Eduvas, was cited as the Best Online Video on the Motor Show.

With three citations, TopGear.com.ph was the most-awarded website during the CAMPI Media Awards. In the past 30 days alone, the website reached over 105,000 unique visitors and generated more than 1.3 million page views.

Top Gear Philippines editor in chief Vernon B. Sarne received the Best Opinion Column on the Motor Show award for his piece in the motoring section of The Manila Times, which was likewise cited for the best print coverage during the PIMS.

Traffic jam in China stretches for 9 days
View other articles about:
Recommended Videos
Read the Story →
This article originally appeared on Topgear.com. Minor edits have been made by the TopGear.com.ph editors.
Share:
Retake this Poll
Quiz Results
Share:
Take this Quiz Again
TGP Rating:
/20