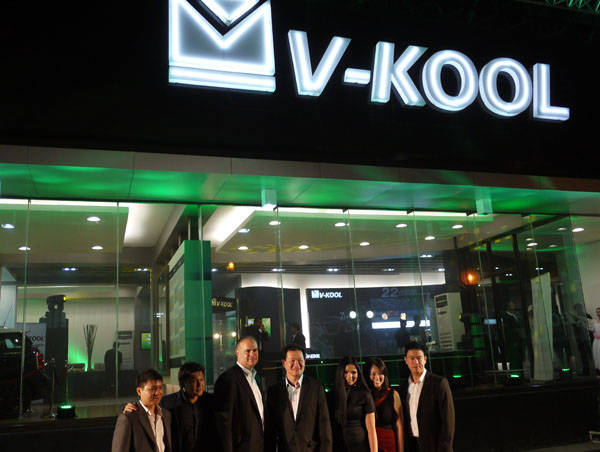 In a grand opening where the organizers literally closed the street down, V-Kool Philippines unveiled its green store concept in Otis, Manila, on September 11.

The event timeline strayed a bit from the norm. There was a press conference first, and then an open forum. The guests were then directed to the covered facade where young ballerinas danced to earth-themed chants. As the girls performed, a slide presentation of V-Kool's environment efforts was displayed on a large video screen.

The presentation was about V-Kool's Envirocare Facebook campaign called "One-Like One-Tree." For every 'like' the premium tint receives on its Facebook page, a tree will be planted. The goal is to plant 20,000 trees. The official V-Kool website was also introduced. This will give those who want to know more about the products access to more information.

The highlight of the evening was the unveiling of the showroom itself. V-Kool Philippines president Willy Tee Ten and general manager Lordan Marco led the formal reveal, accompanied by their counterparts from VKI.

The V-Kool concept store had to follow strict guidelines. There was careful selection of wall paints and air-conditioning units, among other considerations. Even the marketing collaterals used during the event were eco-friendly.

Inside and outside the green showroom were automobiles installed with V-Kool tint. There were Mini and Ford vehicles--including a macho Ford Mustang. Tee Ten is also behind the local distributor of Mini as well as the multibrand dealership network Autohub.

Ayrton Senna documentary to premiere on HBO Asia on Sept. 17
View other articles about:
Read the Story →
This article originally appeared on Topgear.com. Minor edits have been made by the TopGear.com.ph editors.
Share:
Retake this Poll
Quiz Results
Share:
Take this Quiz Again
TGP Rating:
/20