Hypermiling at its finest
May 12, 2012
CAR BRANDS IN THIS ARTICLE 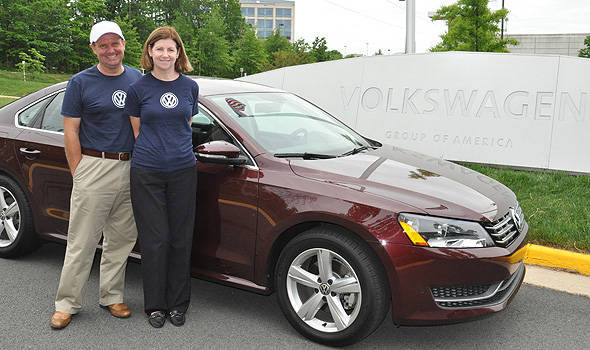 A Volkswagen Passat now holds the world record for traveling the farthest distance on a single tank of fuel by covering 2,616.95km, beating the previous record by a little over 160km.

To legitimately set the record, the Taylors drove the Passat under real-world driving conditions, and that meant driving it only in daytime to experience normal traffic situations and carrying 120 pounds of cargo. The couple also took turns driving and spent no more than 14 hours per day on the road.

"The Passat was engineered and designed to be a comfortable yet fun-to-drive alternative in the midsize segment," said Rainer Michel, vice president of product strategy for Volkswagen of America. "The TDI Clean Diesel version unites driving dynamics and fuel efficiency that isn't found in the competitive set. We’re honored that the Taylors chose the 2012 Passat TDI as the vehicle to set this outstanding distance record with. Their record shows just how economical the Passat TDI can be in the right hands."

A handful of TopGear.com.ph followers met the Taylors in July 2011 when they were selected by Pilipinas Shell to be part of the Philippines' fuel-economy team. According to Volkswagen, the Taylors "have collected more than 90 world fuel-economy and vehicle-related records from drives around the globe."

Ferrari F1 team to run with new Shell fuel at Spanish Grand Prix
View other articles about:
Recommended Videos
Read the Story →
This article originally appeared on Topgear.com. Minor edits have been made by the TopGear.com.ph editors.
Share:
Retake this Poll
Quiz Results
Share:
Take this Quiz Again
TGP Rating:
/20