Want to buy one of the BMW 520d units to be used for ADB event?

Slightly used and discounted
by Vernon B. Sarne | Apr 17, 2012
CAR BRANDS IN THIS ARTICLE 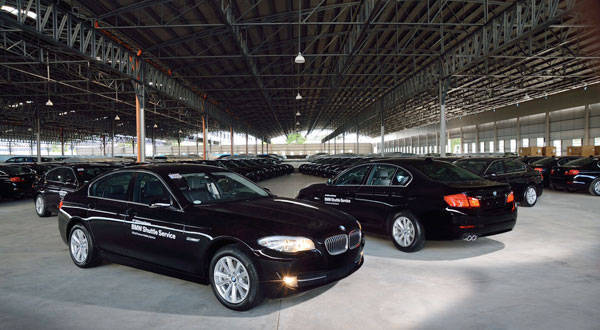 In our preceding report, we announced the formal turnover of BMW 5-Series units by Asian Carmakers Corporation to the Philippine government for use during the 45th ADB Annual Governors' Meeting. Those who will use the cars are heads of state from ADB's 67 member countries, including Japan, Australia, Korea, Singapore, China, Germany, the UK, the US, Canada, Italy, France and Spain.

Now, our natural question is: What happens to the brand-new cars after the event?

"We will sell every one of them," ACC sales and marketing director Glen Dasig told us. "After the event, interested buyers can just go to any authorized BMW dealership and ask about these cars."

Of course, the cars will be substantially discounted. By how much exactly?

According to Dasig, the cars will basically be like brand-new.

"We will take pains to make sure the cars are well-looked-after," he shared. "We will deliver them to the appointed place via flatbed carriers. The only time they will actually roll on the road is when they pick up the delegates from the airport, and when the delegates are transported around the city during the event, including from the hotel to the event's venue (Philippine International Convention Center)."

Plus, ACC actually trained the drivers tasked to pilot these 520d units.

"After the event, we will have the cars detailed, so they will be like virtually new," Dasig assured us.

We don't know about you, but a half-million-peso discount for just four days of use sounds like an offer that's too good to be true. But you need to act fast if you're interested. As early as now, a few of the cars have already been spoken for, Dasig told us.

BMW is premium mobility provider of ADB Annual Governors' Meeting
View other articles about:
Read the Story →
This article originally appeared on Topgear.com. Minor edits have been made by the TopGear.com.ph editors.
Share:
Retake this Poll
Quiz Results
Share:
Take this Quiz Again
TGP Rating:
/20