'We are in a crisis' - Toyota chief 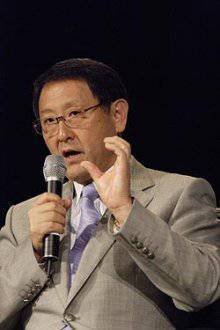 "I deeply regret that I caused concern among so many people. We will do our utmost to regain the trust of our customers," Toyoda said, as quoted by the New York Times, during a press conference in Nagoya on Friday night.


"I believe what is happening now is a very big problem. We are in a crisis," said Toyoda, grandson of Toyota's founder.

"Toyota remains in a storm but I believe we have charted our course. I hope to return Toyota to profit and contribute to the revitalization of Japan," Toyoda said.

He also emphasized that Toyota is committed to improving its products.

1) Improve Quality Inspection Process - Toyota will once again inspect every process, while verifying the causes that led to the recalls, including quality in design, production, sales and service.

4) Support from Outside Experts - Toyota will seek confirmation and evaluation from outside experts-in line with the industry's best practices-of its newly improved quality control management, based on the above improvements.

5) Increased Communication - In addition, Toyota will work to increase the frequency of communication with regional authorities.

6) Improve regional autonomy - To provide customers with satisfying products in each and every region, Toyota has long promoted the autonomy of its regional subsidiaries. We intend to further enhance this autonomy, listen carefully to each and every customer and improve quality.

Toyota in the Philippines

Toyota Motor Philippines has repeatedly issued statements saying units of the said models sold in the Philippines are not affected by the recall.

Local concerns, however, now focus on other vehicles such as the Toyota Fortuner and the Toyota Innova with 2.5-liter D4-D engines for what ABS-CBNNews.com has reported to be a fuel supply pump problem.

Video of the week: The Philippine launch of the all-new BMW X1
View other articles about:
Recommended Videos
Read the Story →
This article originally appeared on Topgear.com. Minor edits have been made by the TopGear.com.ph editors.
Share:
Retake this Poll
Quiz Results
Share:
Take this Quiz Again
TGP Rating:
/20