The return of the king
by Andy Leuterio | Dec 11, 2016
CAR MODELS IN THIS ARTICLE 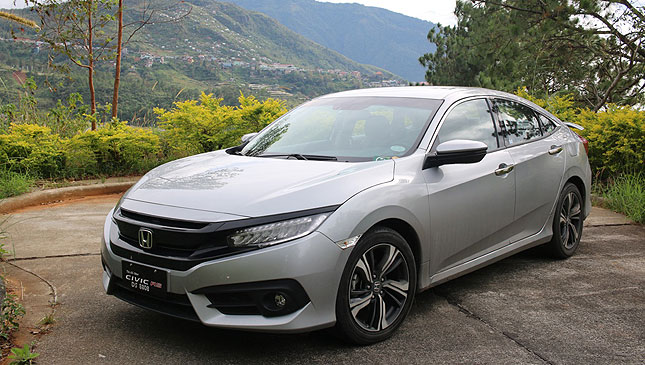 There was a time when a Honda Civic was the "gotta have" car of the youthful market. As someone who's driven practically all model years and variants of every Civic that ever made it here, two made a lasting impression: the 1998 SiR and of course the 2006 Civic 2.0 FD.

The former was light and racy at a time when twin cams and 160hp were a big deal in a compact car. The latter was a technological leap forward with its digital cockpit and ever-refined manners.

But Honda hasn't always been consistent with the Civic. After the SiR, came the seventh generation with its boxy look, also-ran features and, gasp(!), cheap front strut suspension. The eighth generation FD redeemed Honda after that wallflower, but the company dropped the ball again with the ninth-generation Honda Corolla Civic! It wasn't a bad car and sales still made Honda's bread, but nobody could say that the previous generation was impressive. Hell, I even have trouble remembering what it looks like.

At least Honda knows to periodically learn from its mistakes, because the new car is a bang-on, straight-up, in-your-face quantum leap forward for the class. In a market where 2.0 liters and at least 150hp or thereabouts typify the class, the Civic in RS Turbo spec makes an impressive 173hp from a 1.5-liter turbo.

Yes, a turbo, a rare sight in passenger cars these days but some would say heralds a renaissance for small-displacement motors. Just like the 1.0-liter Ecoboost in the Ford Fiesta, Honda engineers have figured out how to maximize a given displacement without suffering '80s era turbo lag. Now, while I remain a big fan of the "No replacement for displacement" school of thought, I also believe in having the right tool for the job.

In this case, the Civic's mission is to function as a daily driver in our version of Dante's Inferno traffic, and occasional road warrior. The two missions are in contrast with each other. On the one hand, you want the smallest engine you can live with to minimize fuel wastage in gridlock. On the other hand, you need power to hustle you and your family to and from the weekend vacation. 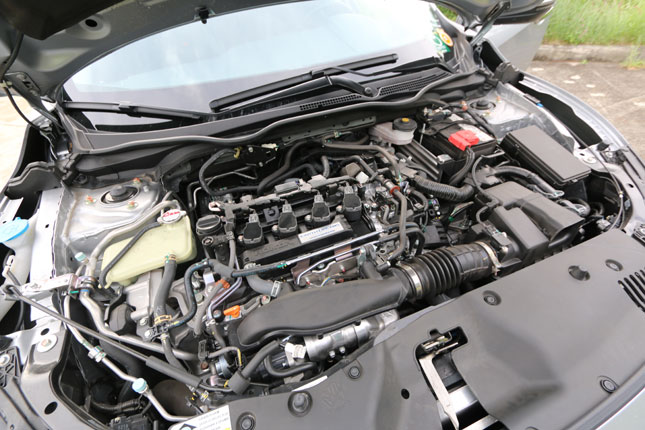 Marrying a turbo with a relatively small engine like the Civic's, and pairing these with a CVT and efficient "Earth Dreams" tech gives the car a Jekyll & Hyde personality I can't help but fall in love with. In traffic, with the "Eco" mode on, the car is as smooth as can be. The only way it could get any smoother and more relaxing would be if it were an Uber, but even then you can still get stuck with a shitty driver.

When the road is clear, turn off that wussy "Eco" button, shift to S, floor the accelerator and say goodbye to almost everyone on the highway. Midrange acceleration is gratifyingly strong and urgent, the "whoosh" and growl from beyond the firewall urging you to keep charging. The single scroll turbo reaps a locomotive-like torque output of 220Nm from 1,700-5,500rpm. Save gas in traffic, so you can kick the afterburners on the open road!

The CVT is a good match to the engine, too. In full-auto mode, it's relaxed and smooth in "Eco" and Drive. Put it in Sport, and it aggressively changes ratios and holds a lower "gear" to keep you in the sweet spot. The seven preset ratios are also fun to play with using the paddle shifters. Honda eliminated the "+/-" gate usually found with manumatics, perhaps having come to the realization that it's both redundant and hardly ever used. No BS, this car will be the subject of many #humblebrag posts.

After the previous generation, which handled and drove like a sad sack of wet rice, the new car feels much more athletic and vigorous without being childishly uncomfortable. The steering is sharp and responsive, and the suspension has excellent damping and rebound control. You can attack your favorite secret mountain road with confidence. The car has just enough roll to let you probe the limits, but it also has a low center of gravity to let you balance the car with precision. It understeers at the limit, and it will take an incredible moment of stupid to lose control. 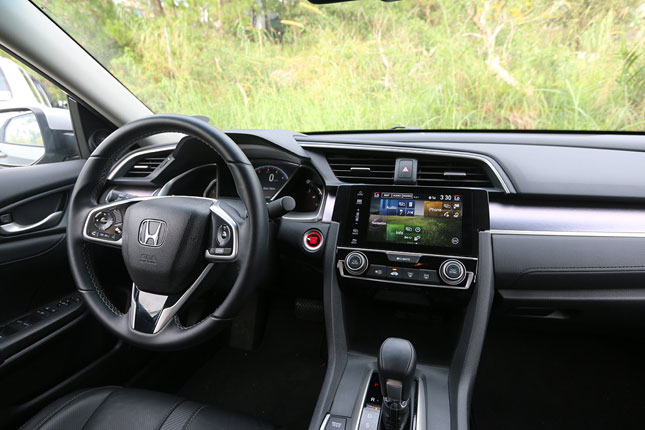 There is much more to like about the new car besides the drivetrain or chassis. The all-digital instrument panel and center stack is very high-tech and will make you feel like you're piloting an F-35, and the cabin is as logical as Spock to a fault. The gray and black color scheme looks cool on a gloomy day, but one gets the feeling you'll want a little more color every now and then. Which is probably why the multi-mode navigation/audio/phone screen is configurable every which way to suit your tastes. You can put wallpapers, turn it into a giant clock display and such, and the screen is sensitive enough that all you need is a light tap.

There's a little screen on the that lets you see the quick summary of audio, phone, fuel efficiency, and turbo usage. The latter is highly entertaining and takes the place of a gaudy boost gauge. Watching the LED bars climb up as you floor the throttle and the speed builds never fails to give the young-at-heart a kick.

There are only a few ergonomic faux pas in the Civic. The volume button on the steering wheel can also be swiped, and this is all too easily brushed when you're steering or just fiddling with all the other buttons. The climate control uses the central screen for blower control, requiring you to wait several seconds before you can adjust the setting as the screen switches. That is not fun on a blazing hot summer day.

The split-level console looks avant-garde but it's really just a confusing way to store your phone, wallet and coins. No one will complain about the pushbutton e-brake, which is a very high-end touch and will only be missed by boy racers who long for the (never used) ability to yank the handbrake for a nasty J-turn.

What else might some buyers find issue with the car? Well, the "RS Turbo" might be a tad pretentious for enthusiasts who believe that the name belongs on a track- or autobahn-bred machine, but hey, YOLO. It sports dummy plastic "air intakes" on the bumper, and the rear wing takes a little getting used to. Of course, the Civic suddenly looks very plain without said visual enhancements. At the very least, the car has the goods to back up its racy looks for the type of driving a real world driver would ever subject it to.

At P1,403,000 for this gem (add more for the Modulo kits), it'll be a stretch for most family men who will see more value in an SUV or MPV for that same amount. But if you already have a people mover in the stable, the all-new Civic is a treat you can enjoy every day. 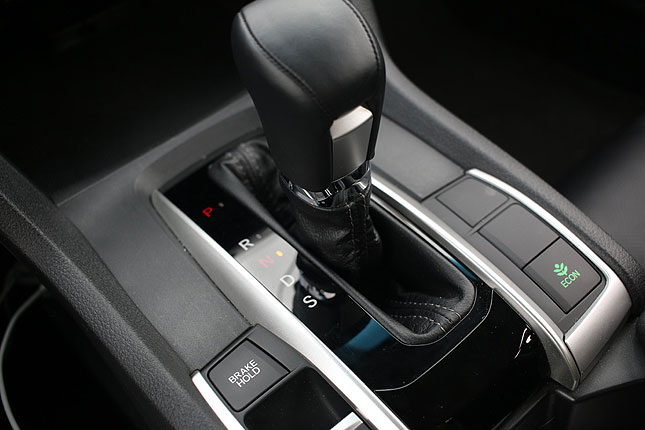 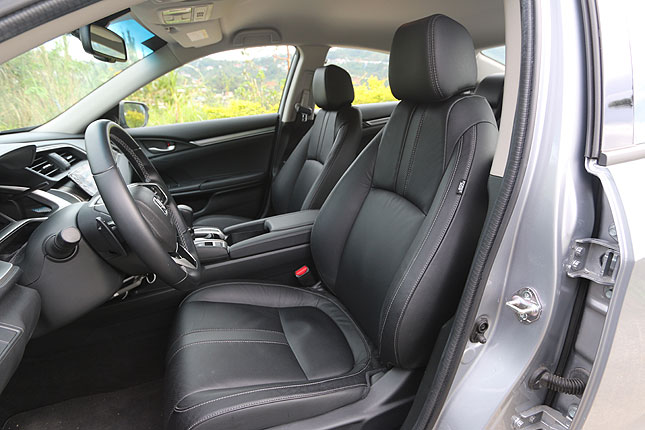 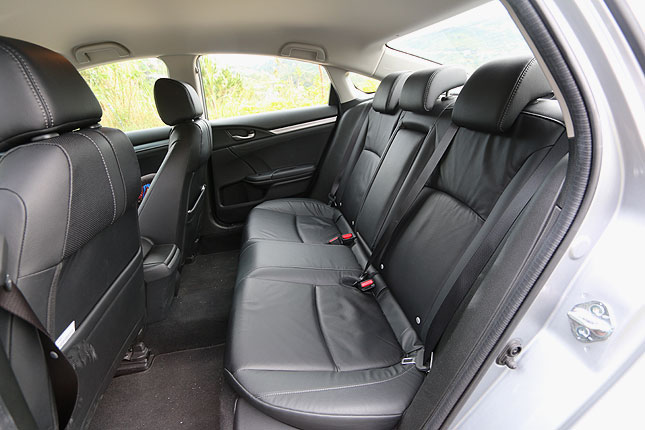 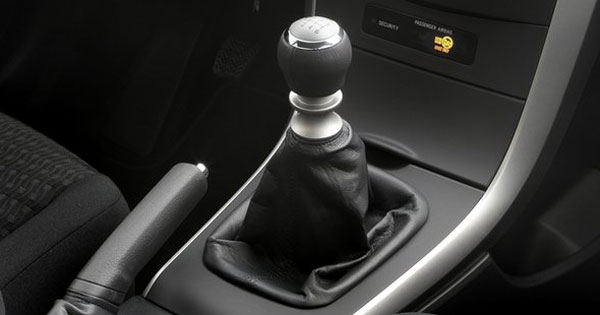 Does launching from second gear hurt my car's engine?
View other articles about:
Read the Story →
This article originally appeared on Topgear.com. Minor edits have been made by the TopGear.com.ph editors.
Share:
Retake this Poll
Quiz Results
Share:
Take this Quiz Again
TGP Rating:
/20