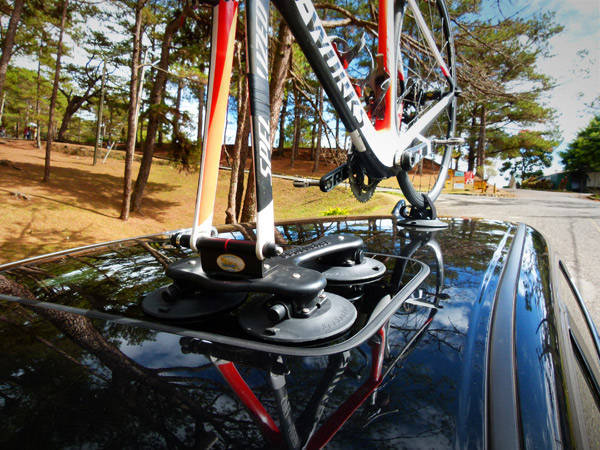 As you know, I bike a lot. Actually, I probably have more mileage on my bike than in my car. I have two bicycles at any one time--a road and a time-trial bike--and occasionally have a mountain bike sharing precious garage space. About three times a week, I have to drive somewhere to get to the training grounds. For the longest time, I've been stowing my bike in the backseat. It's simple, free and safe from trouble. It does get messy. The fork can scratch the door panels, and the chain can hit the seats and leave grease stains.

Except this method doesn't work when I also need to transport passengers. I could put my bike in the trunk, but I generally hate having to remove both wheels. I have a two-bike trunk mount, but I really hate using it. It's the type you hook onto the edge of the trunk with a couple of straps, and it's really ugly. Well, it's also inexpensive, so I get what I paid for. Mainly, I don't use it because it's a hassle opening the trunk once it's attached.

The logical solution would be to get a roof rack. Hundreds of people have them, with Thule and Yakima being the more popular brands. But I've resisted it because I don't like how they make a car look. Some cars look just fine having a roof rack on them--Subarus come to mind. SUVs obviously look the part with a rack on top. But cars? I like to keep them clean. It also preserves the car's aerodynamics.

But there really are times when I need to fill up a car and bring my bike. So, I finally convinced myself to invest in a SeaSucker, and I'm in love. After envying two of my friends who have them, I got a one-bike Talon model. In a nutshell, they use oversized vacuum cups to affix themselves to your car. The Talon has three six-inch cups for the fork mount, and one six-inch cup for the rear wheel strap. It's a redundant setup that should calm the normal fear of these things suddenly letting go on the highway. 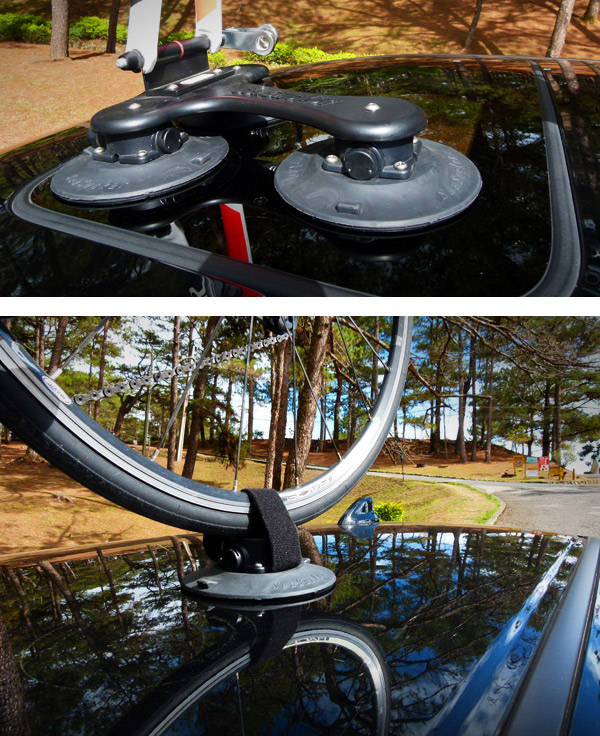 Affixing the vacuum cups to the car is easy. Wet the surface to ensure a good seal, then pump out the air using a small button for each "sucker." The button/valve is marked with white to indicate when the seal is beginning to lose suction, at which point it's just a simple matter of pumping it out again. Removing them is also simple. Just pull either of two tabs on each sucker to break the seal. Actually, one tab could be pulled back and the cup would still have enough "stick" to hold the bike.

For my first test, which was a 30-minute drive on the SLEX, it only took five minutes to attach the SeaSuckers, mount the bike and store the front wheel in the trunk. Being tentative at first, I maintained a steady 100kph and peeked at the roof at one point to check that everything was still there. It was. On the drive home, I got a little more confident and pushed it up to 120kph with no problems.

On a recent Baguio road trip, I attached it to the Honda CR-V and had no issues with the 300km drive. I actually forgot that there was a bike on the roof as I sped up the switchbacks of Marcos Highway at a faster-than-normal pace. On the trip home, I only had to pump out some air in one sucker after dealing with some strong crosswinds in Tarlac. The surface should also be reasonably clean to ensure a good seal, and some dirt had probably contaminated the suction. The only thing that made me nervous was the sound of the wind whistling past my bike at 120kph. My friend has driven at up to 140kph with his SeaSucker and his solution with respect to the wind noise is simple: Turn up the stereo volume!

The only real caveat is that since it's not permanently fixed to your car, then you have to stow them inside while you're out riding. But again, attaching and removing them is a very quick and easy operation.

I've found that it's best to mount it on a glass surface for the best seal as metal can expand and contract depending on the temperature. So, I attached it to the CR-V's moonroof. This also let me see the SeaSucker and check on it once in a while. I've seen pictures on the Internet showing owners attaching the front mount to the windshield. It can also be attached to the rear hatchback of a car, SUV or van.

At P14,500 for a Talon (I got mine at All Terra Cyclery in Ortigas Home Depot), it's quite reasonable for a portable set that can easily be switched between cars. If you're the type to bring your bike with you when you travel to foreign countries or even to far-off provinces, it can easily fit in a suitcase so you can mount your bike on a rental car. In fact, the versatility of the SeaSucker is so good that owners have taken to mounting them in rather creative ways. I'm still thinking whether to test mine by mounting it on the rear hatch of our SUV.

For now, I'm just happy that it does a great job securing my bike so I can free up the cabin for more people and cargo.

A Top Gear PH reader asks: Which 4x4 vehicle should I get?
View other articles about:
Recommended Videos
Read the Story →
This article originally appeared on Topgear.com. Minor edits have been made by the TopGear.com.ph editors.
Share:
Retake this Poll
Quiz Results
Share:
Take this Quiz Again
TGP Rating:
/20