The road is for cars and bicycles

An appeal to both motorist and cyclist
by Andy Leuterio | Dec 3, 2012 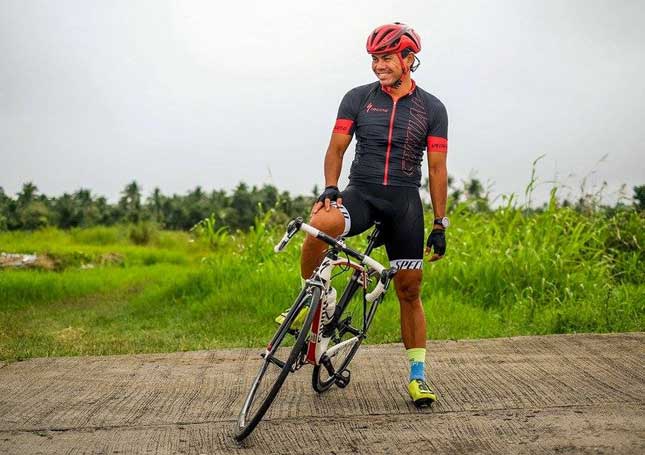 Whether you ride a bike or hate just the sight of a cyclist taking up space on the road, please take a moment to read what I have to say: Nobody wins when a motorist and a cyclist collide. The car gets damaged, the cyclist gets banged up, and in a worst-case scenario, people die.

Personally, I love cars and bikes. The bicycle was the first thing that gave me the joy of moving about on two wheels before I was even big enough to drive a car. When I'm not driving cars or writing about them, I coach triathlon. So, that means part of the job is riding my bike weekly around 300km to 400km, about the same mileage I put on a car or sometimes even more. Put that much time on a bike and accidents are bound to occur.

Not counting the ones that happened during a race, I've had two on the road.

The first involved me and a lady by the side of the road. I was on a downhill stretch of Aguinaldo Highway near the shoulder, and a bus was around 300m behind me. She saw the bus (but apparently not me), computed speed, time and distance, and decided then and there to cross the road, straight into my path. I braked, swerved, but still hit her at around 30kph. We both flew across the road from the impact, and as I lay sprawled there trying to regain my senses, I braced for the impact of the oncoming bus.

I was thankful that it wasn't my time yet nor the poor woman's. A small crowd formed. She looked like she was in bad shape, so she was brought to the hospital. It turned out that she'd cracked her collarbone and suffered a concussion. I got away with a few bruises and cuts--and the scare of my life. Both her family and I agreed that it was an accident and we settled on paying for her hospitalization. After that accident, I've always been wary of pedestrians crossing the road.

The next was a more banal incident not 10 minutes from my home. I was pedaling uphill and moved to the left to overtake a tricycle, but the driver decided at that moment to make a quick U-turn without checking behind. Again, I slammed on the brakes but still hit his trike at an angle. Again, I flew across the road, landed hard and prayed in those few seconds when I couldn't get up that a car wouldn't come and crush me.  This time, the only damage was on the bike.

And now, you may have seen that photo circulating on Facebook of the cyclist Jojie Puricallan, who perished in an accident. So, I want you to put yourself in two pairs of shoes: the driver's and the cyclist's. If you have a conscience, you know that any accident involving a pedestrian (a cyclist is considered one) is still the fault of the motorist. If you ride a bike, even casually, then you know that getting hit is serious. A cyclist is more vulnerable than someone on a motorbike. At low speeds, the latter can absorb some of the impact force. A bicycle, on the other hand, has the impact protection of a Coke can. And if you've never crashed on a bike, try running at full speed into a concrete wall. Most people can sprint up to 20kph or so. Some crashes happen at double that speed. It's not a pretty sight. Skin gets torn, bones snap, and in extreme cases, major blood loss or brain damage can occur.

If you're the driver, it's pointless to blame the cyclist for the accident. I would think that if you're a decent human being, your first concern should be to check the cyclist for injuries and offer to bring him to the nearest hospital. If you're the cyclist, on the other hand, the truth is that you can only do so much to protect yourself.

This reminds me of a very scary accident I saw firsthand several weeks ago, just after the Bike King Cycling Classic Tour of SCTEX. My teammates and I were spinning to the parking lot near the tollbooth exit, and the winner of the Category 4 race was likewise doing so, savoring the victory in his head a few meters ahead of us. Then we heard the most godawful screech as a white Kia Rio panic-braked from the right and just narrowly missed T-boning the Category 4 guy. Instead, he hit the front wheel of the person, and the cyclist slammed against the side, bounced off the car and tumbled to the road. The driver of a vehicle behind him estimated that he was at around 90kph before he braked.

We ran to the victim, saw that he was conscious, but found his wrist broken aside from a lot of torn skin. Amazingly, the driver--a young male foreigner--was furious at the cyclist and blamed the latter for not stopping.

"Couldn't he see me coming?" he asked. Apparently not. Then he admitted that he already saw the cluster of people and bikes along the road, and thought that the cyclist would have stopped to let him zoom by. Wrong decision. To make matters worse for the driver, his license was expired. We left after making sure that an ambulance was on the way, and the police had taken over. It's dangerous enough to race bikes, but it's even more dangerous just to ride it on the road.

Yes, we need bike lanes. But sometimes even those won't help if you have motorists who don't respect your space. I ride the bike lanes of Daang Hari, Cavite, a lot, and there isn't a day when I don't get a near-miss from an a-hole driver who'll nearly sideswipe me as I mind my own business. But like I said, cycling is part of my job and I have to take the risk with a prayer and some good luck.

Here is my simple appeal for both Driver and Cyclist.

If you're the Driver, please open your eyes and don't be what's called "bike-blind." The most common accidents involve cars suddenly swerving into the path of an oncoming cyclist because the driver was looking out for large objects like cars and trucks but not a relatively slender object like your typical cyclist. Don't assume a cyclist can stop on a dime like a modern ABS-equipped car. Even if we could, we try not to unless it's really necessary. Why? The same reason you don't like stop-and-go driving: energy conservation. Except on a bike, it's you who get doubly exhausted (and frustrated) from having to stop and accelerate all the time. That's why you see cyclists weaving through traffic on bike lane-less roads: You need to keep the momentum. And besides, staying put means inhaling all the fumes and inviting other vehicles to slam into you from behind.

Now, if you're the Cyclist and whether you ride your bike casually or for competitive reasons, it takes two to tango. Show some courtesy to motorists as well by doing the following:

* Use hand signals if you have to change lanes and look behind before you do.

* Try to maintain your line instead of weaving all over the road.

* Stop when the light is red.

* Travel no more than two abreast if you're riding with friends (roughly the width of the average car). It pisses me off me when cyclists blithely ride through red lights and cause oncoming vehicles to slow down. It's bad for the image and it only makes drivers more hostile to all cyclists in general.

* Finally, don't assume that everyone can see you, or that you can stop just like that. So ride defensively.

I'm always thankful when motorists give me some space and make a clean pass. Some of them even give way when they see I'm clearly having a hard time crossing a busy intersection, having to face off against buses and jeepneys. Maybe they ride bikes, too, and know where I'm coming from.

Just having bike lanes won't solve all the challenges of riding a bike in the city, or even make for better relations between motorist and cyclist. It's about mutual respect and consideration for the safety of everyone involved. At the end of the day, we drive our car to get from A to B and hope not to have any trouble doing so. It's the same thing if you choose to use a bike.

Let's just all get along, shall we?

Just how useless is a Toyota 86?
View other articles about:
Read the Story →
This article originally appeared on Topgear.com. Minor edits have been made by the TopGear.com.ph editors.
Share:
Retake this Poll
Quiz Results
Share:
Take this Quiz Again
TGP Rating:
/20