Behind the scenes of Top Gear PH's May 2014 cover shoot

Featuring the Mazda 3
by Mikko David | May 6, 2014
CAR MODELS IN THIS ARTICLE 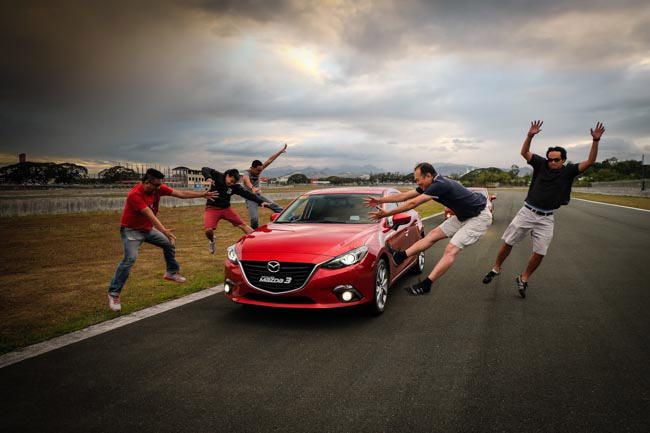 Such is the challenge every Top Gear cover photographer has to face. Being technically sound is a given, but being artistic and going beyond the "peg" while taking tack-sharp and correctly exposed photos just raises the bar to a whole new level. 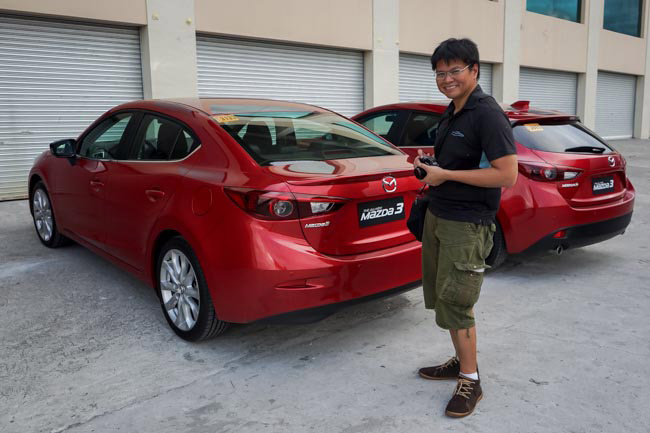 For the May 2014 issue, I was given the assignment to give life to the newly launched Mazda 3. Much like with any Top Gear shoot, I had to make sure that the cars we would be shooting would come out their Sunday best. But unlike with other Top Gear story shoots, the cover photos had to be different. They had to stand out from the assortment of car models featured in the magazine. The angles would have to be unique. The colors would have to pop out of their pages. The cars would have to have a life of their own.

Cover shoots usually start off early in the morning especially if the location is quite a ways off. We gather up at the office or pick one another up from our houses, and start off driving just as the sun rises to maximize the day. For the Mazda 3, we chose the Clark International Speedway (CIS) as our backdrop since it easily connects with the Mazda 3's dynamic design and sporty road manners.

Now, depending on the take of our now former art director Jaykee Evangelista, the car to be shot might either be immaculately clean or real-world dirty. For the two Mazdas in this shoot (one hatchback and one sedan), we chose the former. That meant a side trip to a car-wash shop to tidy up the rain-stained cars and to vacuum the interior to make sure they looked like they had just rolled off the showroom floor. 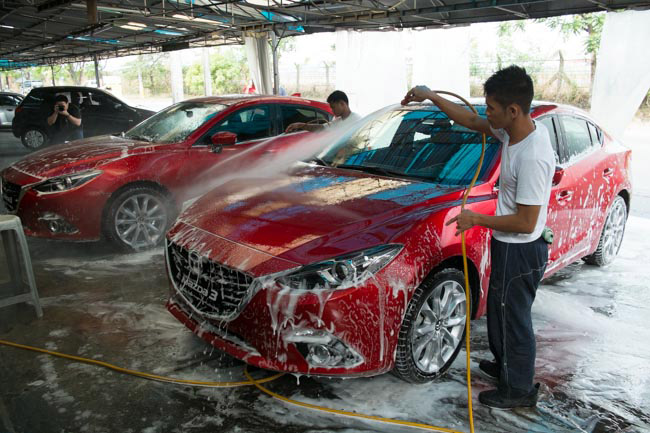 We began with the tracking shots of the cars. Associate editor Paulo Subido and technical editor (and story writer) Ferman Lao drove both cars around the track. Using a third service vehicle to shoot from, I had to direct the two cars into position for landscape and portrait angles. 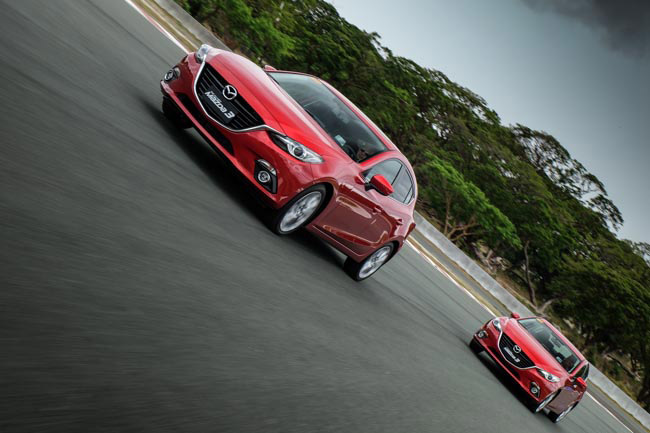 It's worth mentioning that having a fast-focusing camera with a high continuous frames-per-second (FPS) rate will help a lot in expediting the shooting process. For this cover shoot, I used a mirrorless interchangeable lens camera, the Fuji XT-1. I fixed the settings to continuous high shooting, auto ISO, and shutter priority mode with a range from 1/60 to 1/250 in order to sharply capture the cars while blurring the road and the background. 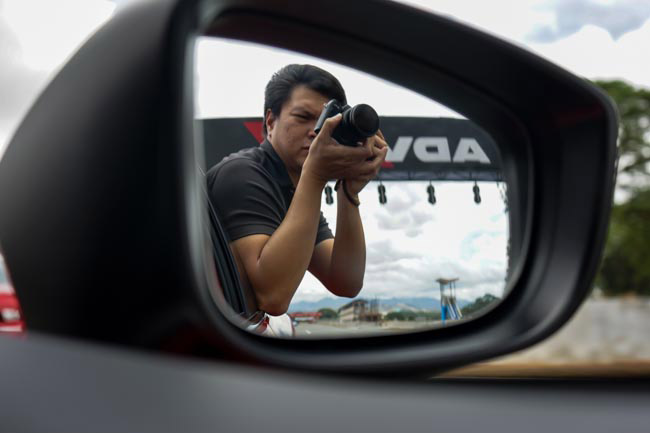 Now, dangling from the camera car while it is cruising at about 40-60kph with hardly any support or restraint isn't for the faint-hearted. So the faster I get the shot, the better it is for my well-being. That's why a camera with a high FPS rate and a quick focusing system is key to the whole endeavor. Using a mid- to top-end DSLR (or this Fuji I had with me for the shoot) reassures me that once I rattle off those frames, I can get a good percentage of shots in focus for the art director to pick from. 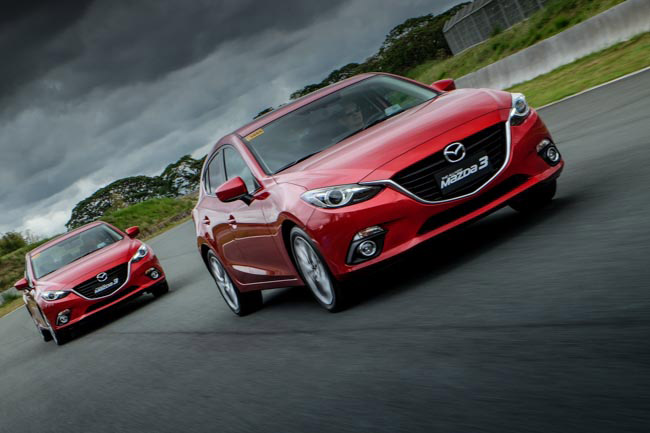 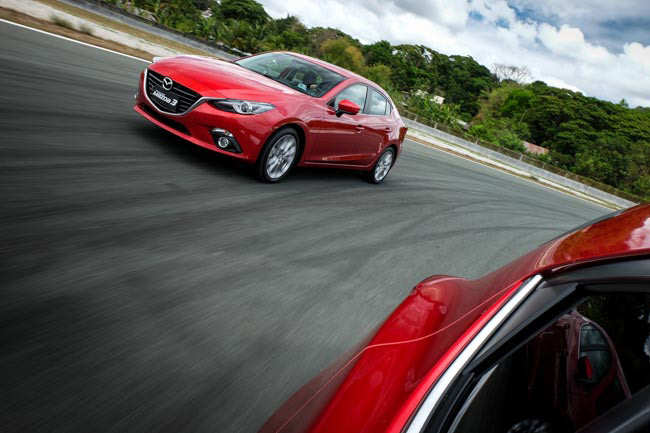 After three or so runs around the east side of the track, we had to make our way back to the pit lane area to set the two cars for exterior and interior detail shots. Again, it's all about finding interesting angles. How do you make an A/C vent look awesome? What will make this car's USB port different from the USB ports of other cars? How do you make a black interior look special and, well, black? 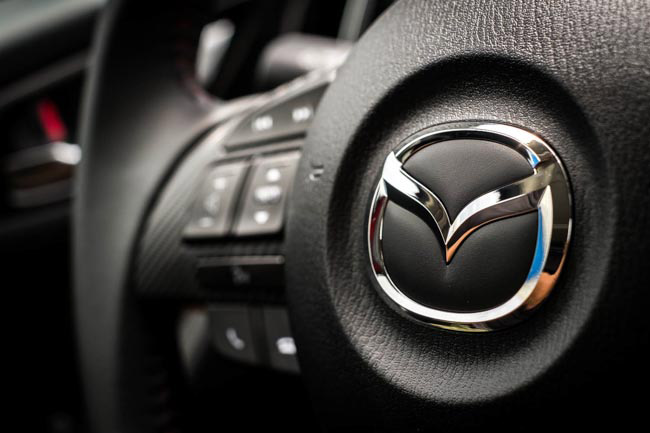 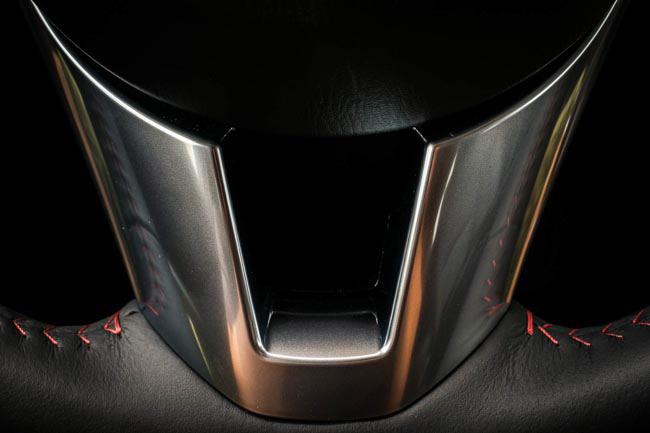 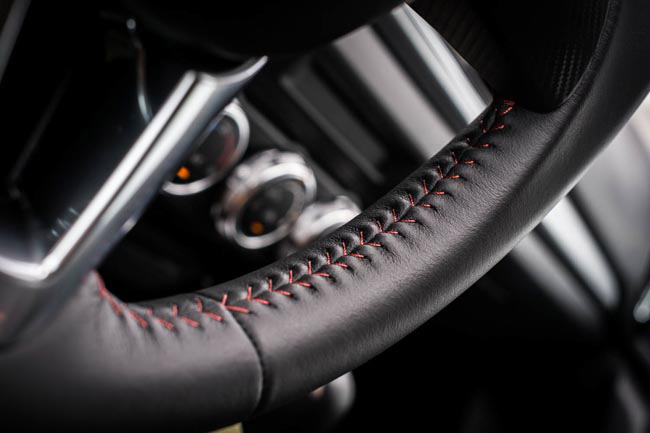 With my assistant Charles Ng helping tidy up the cars and set up the lights, it was now up to me to make sure I got the shots that I wanted and the shots the magazine needed. 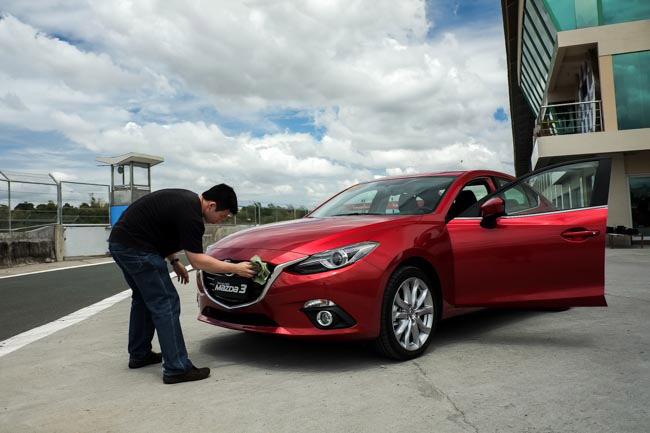 Jaykee was also on hand to remind me of the shots he had in mind. And we had to mix our ideas in order to get the images right. For example, the full dashboard shot was a requirement from this shoot so the challenge was to deliver that without making it look like every other full dashboard shot taken from the backseat. As per the peg, positioning the other Mazda 3 as part of the background did the trick. 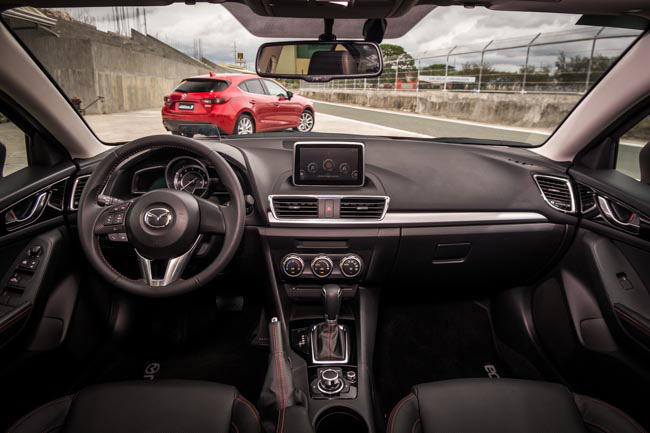 After a hearty lunch break, we needed to continue shooting other action shots inside the track. So another 30-minute session and we had both cars going back and forth a few corners of the track for some panning shots. 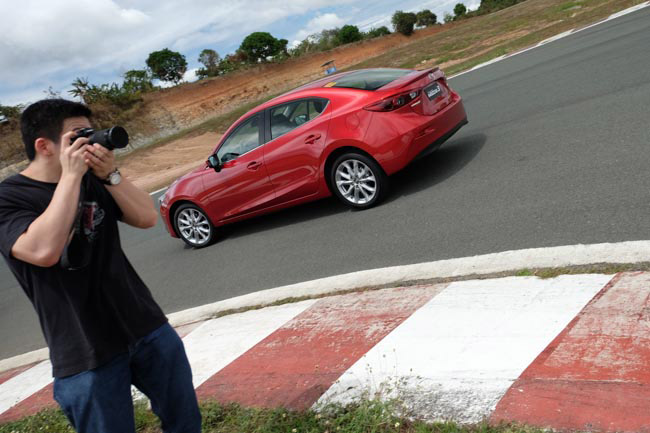 We got a break to extend our stay at the corkscrew section of CIS to do some exterior detail and beauty shots as well. Again, the choice of angles is key. I didn't want the art director to see the same shots he had seen from me in previous cover shoots, but I also had to give him the key design cues of the Mazda 3 that made it, well, the Mazda 3. 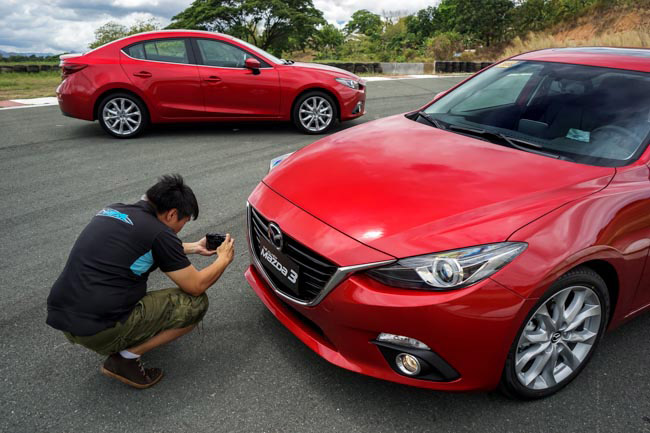 Now, I had done this bit countless times: shooting the headlights, the badges, the grille, and the wheels. I attempted to make them look different by varying the angles and focal lengths as well as playing around with depth-of-field. 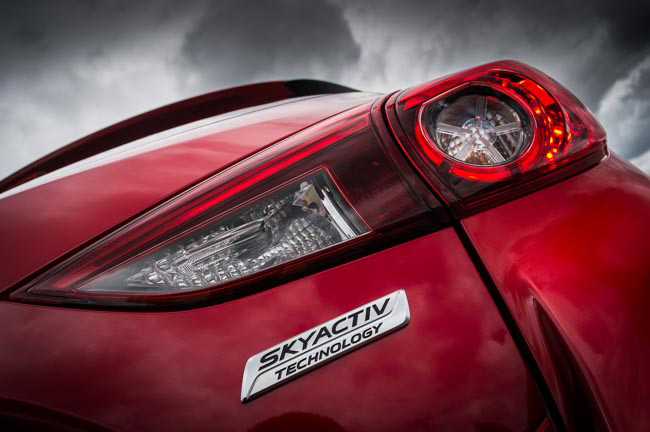 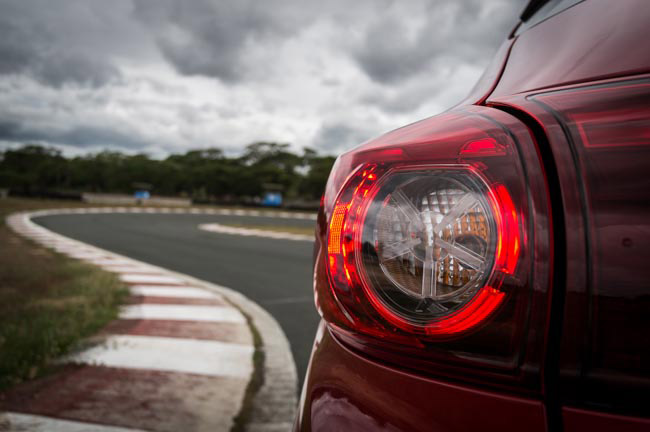 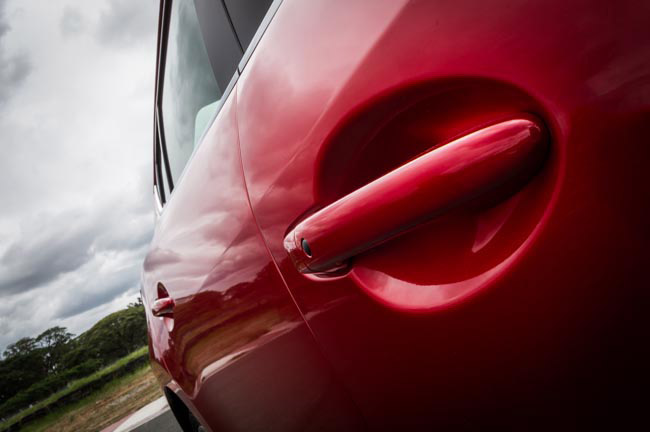 After getting the necessary stills out of the way, we just needed that one "Epic Shot" to complete the package. I knew I could get a vantage point of the whole track if I positioned myself on top of the corkscrew hill. By placing the two cars strategically within the view to capture them as part of the grand scenery, I knew I had the shot I wanted. 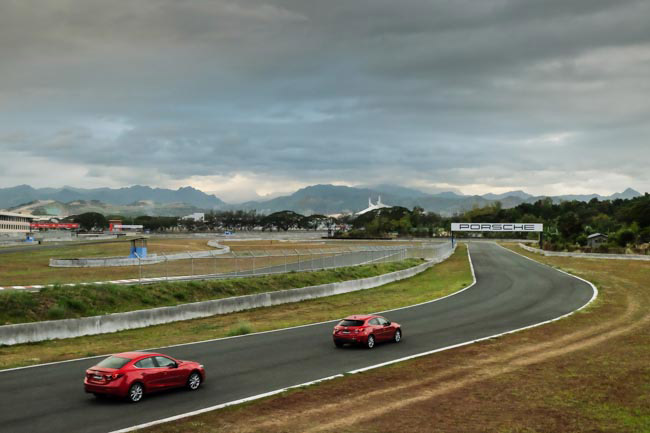 By the time we finished, sunset had already gloomed the track. But I couldn't resist a few more quick snaps of the cars with the fleeting rays of the sun radiating the clouds up high. With such glorious colors, I knew my day was complete.

While the process of taking photographs is over, it is the next few hours spent behind the computer to spice up the images and to choose which one goes where in the layout that will dictate how this shoot will turn out. Jaykee's final masterpiece as Top Gear Philippines' outgoing art director might just come out as one of my best shoots yet.

Photos by Mikko David; photos of the columnist by Charles Ng 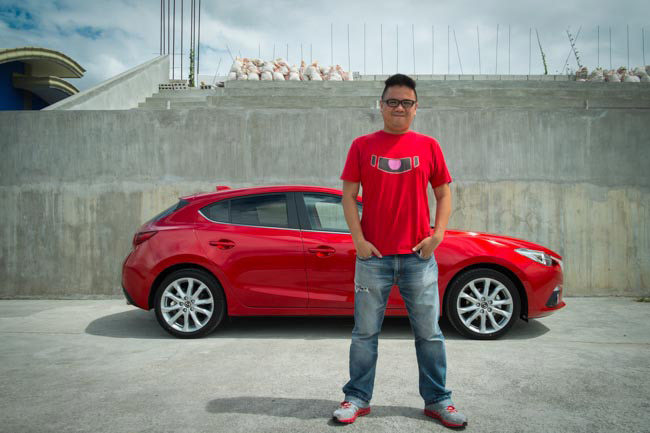