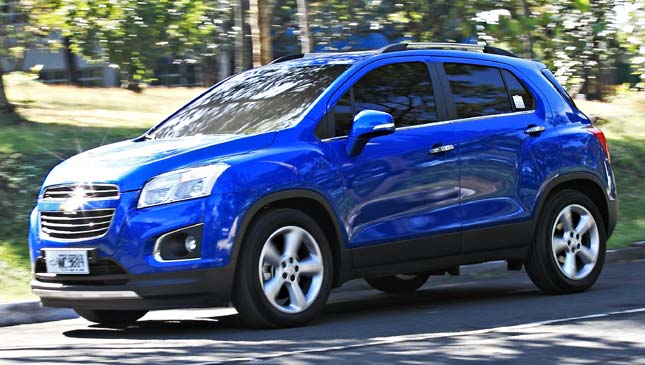 The Trax is an interesting take on the hot subcompact crossover segment. Whereas the pioneers of this category tried hard to mimic SUVs in looks, the newer vehicles aim for a sportier, funkier vibe. The Ford Ecosport still carries SUV styling cues, while the Honda HR-V goes for a sports-coupe appearance. The Trax fits somewhere in the middle: It’s like a subcompact hatchback on steroids with its bulging hood, grille and fenders. Yes, we get it--it has muscles. It’s decidedly more masculine than the HR-V.

Some SUV-like cues are still present, like the skid plate below the front bumper, and black fender liners that also cover the lower door sills. Just as the HR-V is apparently based on the Jazz, the Trax is obviously based on the Sonic. The dashboard and controls panels carry Sonic bits and styling. The ‘motorcycle-inspired’ instrument panel, which includes a big rotary tachometer, is also found in Chevy’s smaller cars. Speed and fuel level are displayed digitally.

The audio system is controlled via touchscreen. The display is just as bright and more colorful than the Honda’s, but the HR-V unit is much more responsive to touch input. Pairing a phone using Bluetooth needs some digging around in the Trax’s menus, but using it is straightforward. The system allows for voice command, including access to Apple’s Siri virtual assistant. As for A/C controls, they are basic, with traditional rotary knobs.

Because of the Trax’s shorter wheelbase, the rear seat cushion also feels shorter than the HR-V’s, and foot space is correspondingly tighter. In its favor, the Chevy’s tall, squarish roofline makes getting into and out of the car easier. Even the rear seats are easy to access, and can fit tall individuals.

We found the driver seat difficult to get comfortable on, especially when compared to the HR-V’s. Your experience may be different, though, because one of our editors hated the Honda seat. Moreover, the steering wheel only adjusts for tilt, limiting its comfort factor when trying to set an ideal driving position.

The secret weapon of the Trax is its engine. Chevrolet is the first to introduce a turbo mill in this segment. The 1.4-liter gasoline powerplant delivers 138hp and 200Nm. That torque is accessible even at the lower end of the rev range. The combination of the engine and the six-speed automatic transmission is excellent, making the car eager to zip forward with even a light touch on the accelerator. The slushbox shifts crisply and promptly, negating the need for an override most of the time. The HR-V, when not in Sport mode, feels positively sluggish in comparison.

The suspension is the basic front/rear combo of MacPherson struts and torsion beam. The setup is for sportier handling, the little sport-ute staying in its lane during enthusiastic driving. The ride is firm but not harsh.

Six airbags are standard on the Trax. To help keep it on the road, it features ABS, traction control, and stability control. It also has cornering brake control, helping to keep the vehicle more stable under braking when taking a curve. Talk about staying on track. 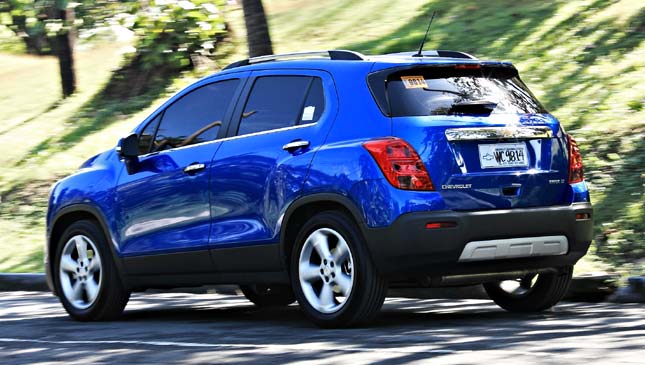 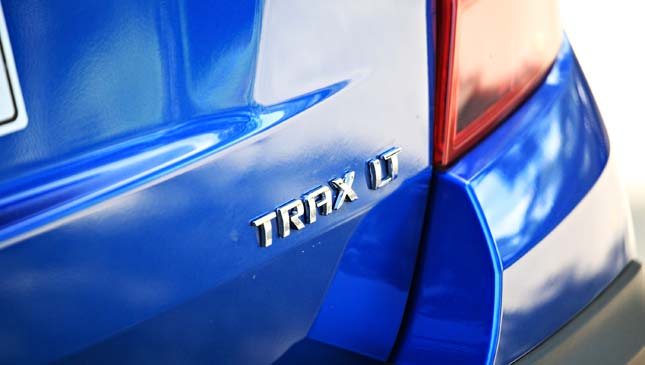 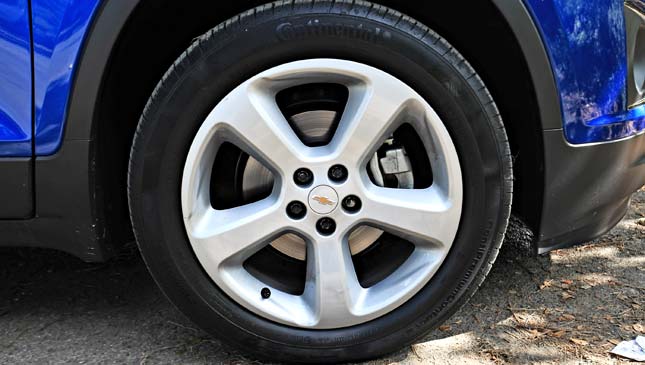 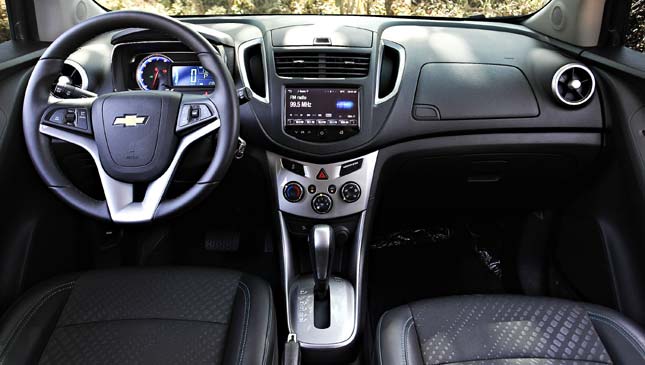 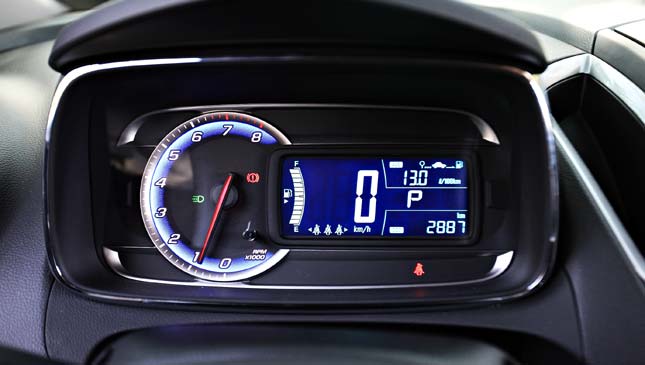 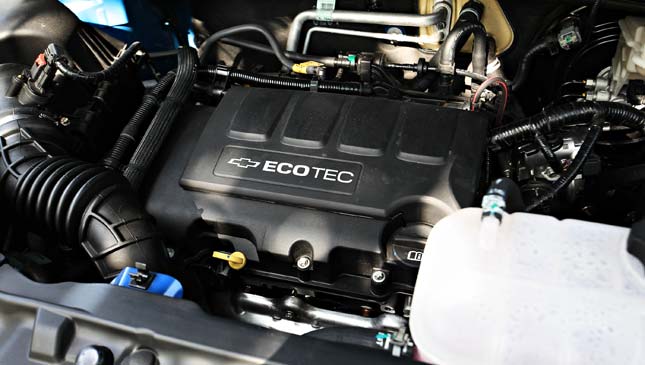 Up next: Honda HR-V 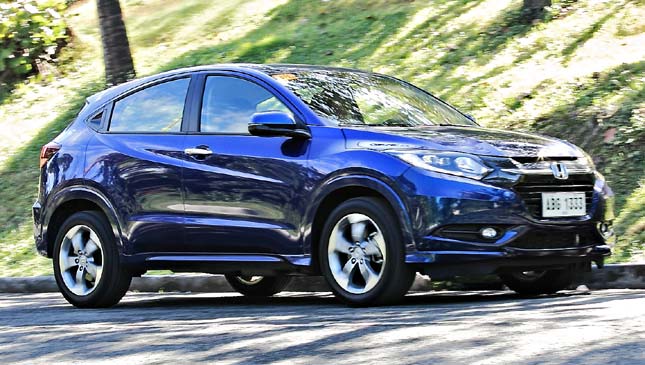 The latest HR-V is Honda’s second stab at the subcompact crossover segment. The previous model was one of the rare failures for the brand in the local market. At the time, the CR-V wasn’t far in size and price, so the case for a smaller crossover couldn’t be made. And the biggest fault may have been the first HR-V’s looks: a cross between pushcart and coffin.

The successor eschews the mini-SUV look of its rivals for a more car-like appearance. Sporty styling cues include hidden rear door handles, which give the illusion that this is a two-door vehicle. A deep, sweeping crease angles up from the front wheel to intersect with the rear window frame.

Inside, Honda goes for a relatively premium feel, and mostly succeeds. Again, there’s little resemblance to a traditional SUV here. The seats are easy to settle into. They’re instantly comfortable and can adjust, manually, in multiple ways, including the crucial height. The steering wheel telescopes as well as tilts, making the ideal seating position that much easier to set.

The dashboard has the gentle curves similar to those in the City and the Jazz. Like in these subcompacts, the centerpiece is a pair of touchscreen control panels. The panels are bright and easy to read, and respond efficiently to a light touch. Perhaps the only miscue is the lack of a volume knob. That, too, is controlled by touch, thankfully on a separate part of the panel.

If that red push/start button suggests there’s a Type R mill lurking somewhere in the engine bay, you’ll need to manage your expectations. Instead of a fire-breathing motor, there’s a refined and restrained 1.8-liter in-line-four good for 139hp and 172Nm. It is mated exclu­sively to a CVT to favor fuel efficiency over racing fantasies. As such, the sys­tem keeps engine revs as low as possible, as often as possible.

In medium to light city driving, we recorded double-digit km/L figures. After several soul-sapping incidents of Metro Manila traffic, we were surprised to see that fuel consumption was still hovering around 7km/L. There’s also the infamous Econ button, which reduces the air-conditioning cooling and moder­ates throttle sensitivity. This is well and good in traffic, when you can’t go zip­ping where you please, anyway.

Fortunately, there’s a Sport mode. Econ mode or not, it frees up the engine to rev to its upper ranges. This is where the VTEC of yore finally shows itself.

The HR-V has a full complement of electronic safety features, including stability assist, ABS-EBD brakes, rear parking sensors, a reversing camera, Isofix mounting points, and front, side and curtain airbags. The parking brake is electronic. An auto brake feature, acti­vated via a button on the center console, allows you to release the brake pedal in stop-and-go traffic or on an uphill slope, with the brake automatically disengag­ing once you step on the accelerator.

The HR-V is a great second act for the nameplate. It brings a more car-like, comfortable driving experience to its segment, without sacrificing the utility and high driving position that defines it. The style and plentiful convenience features are the icing on the cake. 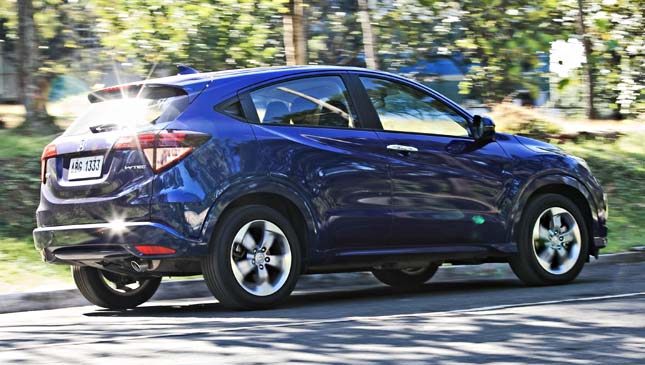 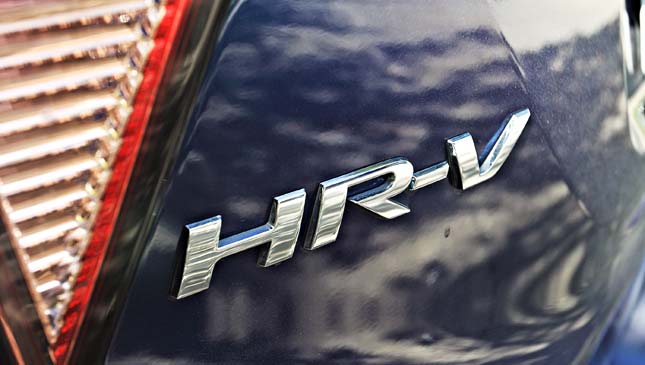 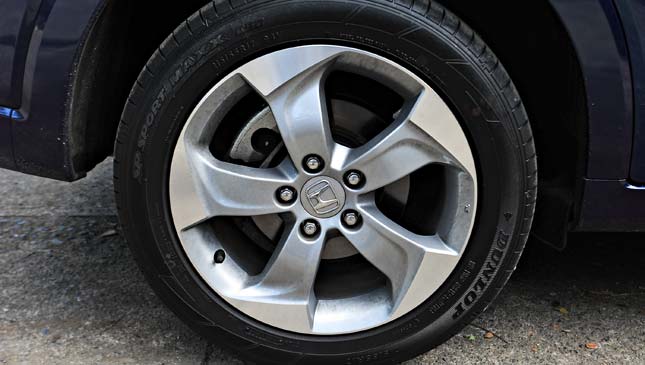 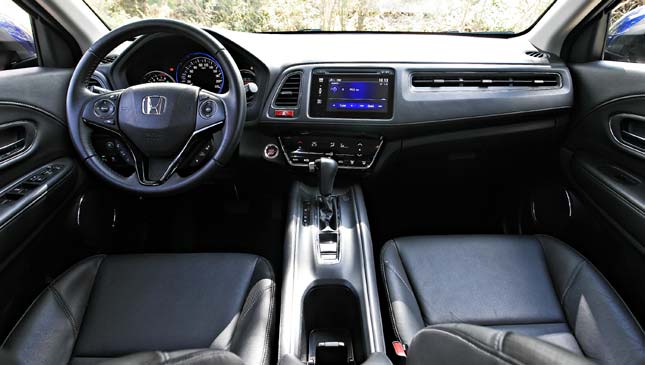 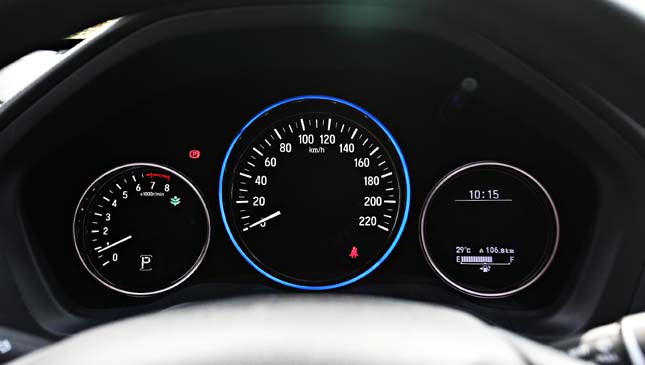 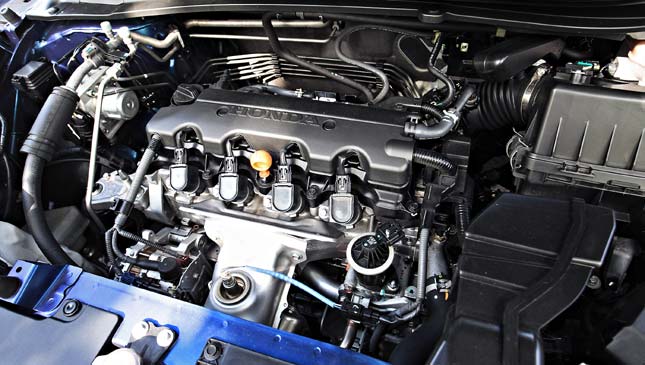 Up next: The verdict 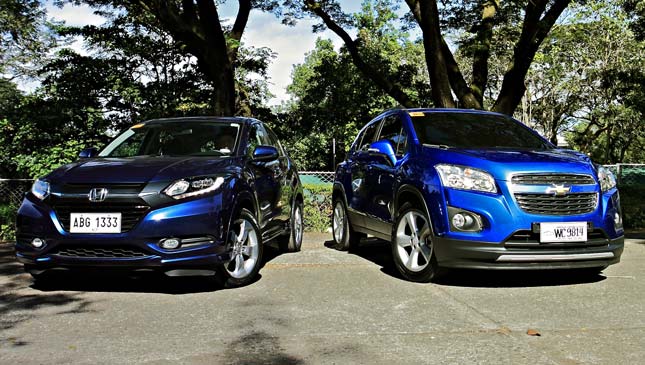 Nature abhors a vacuum, and so does the automotive market. When the original small crossovers became larger in size and price, it left a gap that vehicles like the Trax and the HR-V are now filling.

Both have roomy interiors that belie their compact frames. Their long wheelbase dimensions result in more space, especially for rear passengers. The Trax has adequate room in both front and rear, with the ridiculously tall roofline allowing for easier entry and exit. The HR-V counters with a flat rear floor and plenty of foot room. It feels more expansive, whether you’re sitting in the first or second row.

The luggage compartments of both cars are similarly commodious. Once again, the Honda has the edge, with the bench easily tumbling forward. It can also be folded up, to provide floor space within the cabin.

The entertainment systems of Chevy and Honda both use touchscreen controls. The Trax lags behind in this regard, because the HR-V’s screen is more responsive and intuitive.

That’s where the similarity ends. The Trax is geared more toward enthusiastic driving, with a firm suspension and a peppy turbocharged engine. The HR-V will favor fuel economy above all else, and the suspension is soft and supple.

With that, we found the Honda much more comfortable. We felt immediately at home in the driver seat. The ergonomics are spot-on, from the large analog gauges and the switchgear, to the position of the gearlever. The touchscreen interface is a winner, allowing easy access to the car’s secondary features. Only the lack of a proper response from the VTEC engine was keeping us from truly liking the HR-V. Shifting into Sport mode took care of that, and then some. 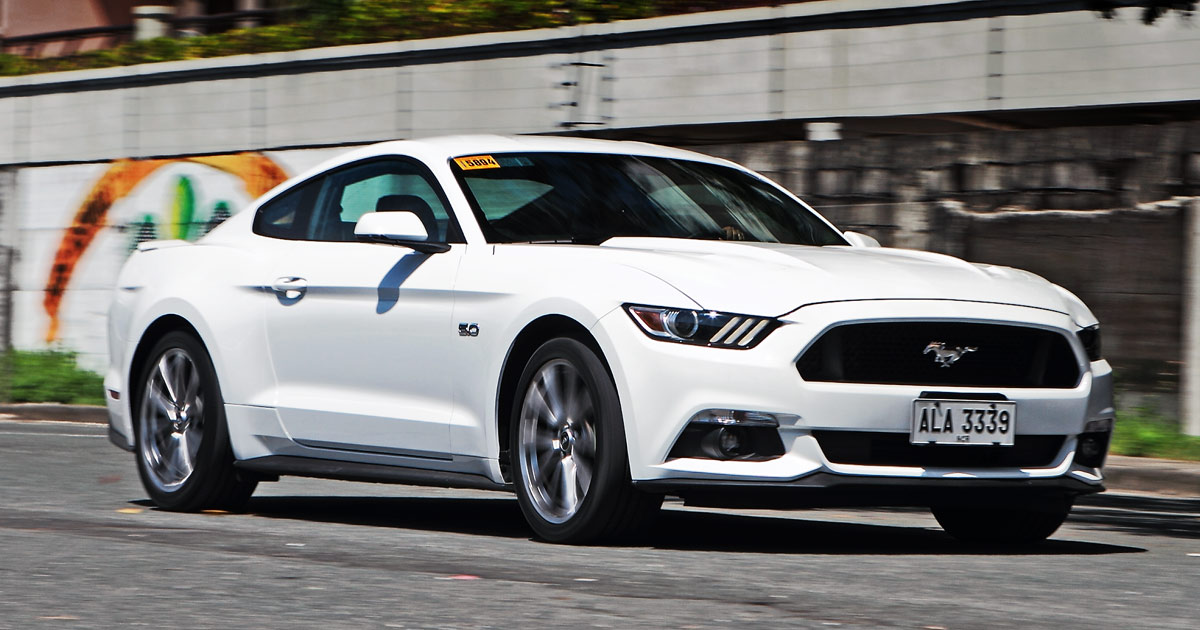