Is the base CVT variant worth the price?
by Jason Tulio | Mar 23, 2019
Toyota Corolla Articles
Feature Article

Perhaps as a means of shutting up its critics, Toyota Motor Philippines revealed the Vios XE variant earlier this year. It's the most affordable in the lineup equipped with a and was said by Toyota to exhibit all the brand's hallmark features while having the comfort of a clutch-less transmission. 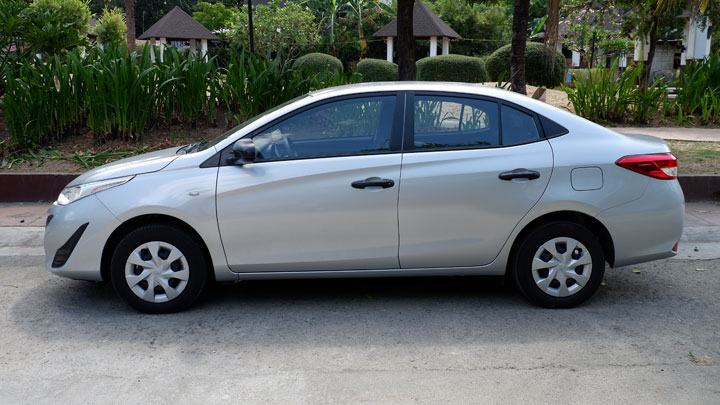 Compared to before, the all-new Vios' styling has become much sportier. Up front is a dynamic grille design with some sleek swept-back headlamps. From the side, the profile is much more defined, with deeply etched character lines giving the car some shape. In the rear, the beak-like taillights make the car look very much like its big brother the Camry.

For a car as ubiquitous as the Vios, the sporty touches are a welcome addition. It looks good from most and provides a good starting point for aesthetic modifications. 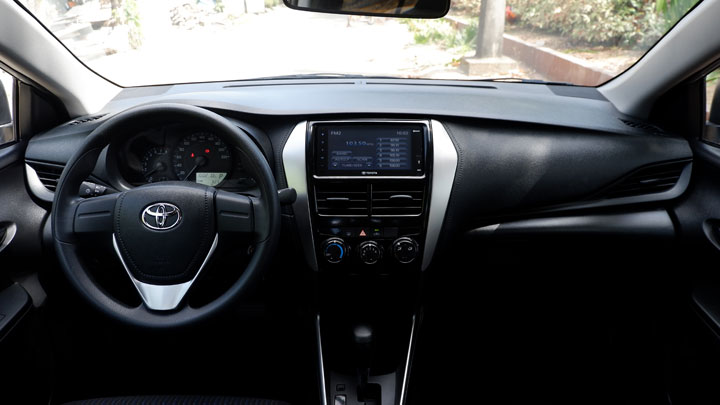 The XE's cabin features the expected fare of plastics and fabric seats. The former doesn't feel too solid but is adequate for the price point, while the latter is on the firm side. I found myself squirming a bit in heavy traffic to try and achieve a comfortable position. The steering wheel, meanwhile, only adjusts for tilt. On the plus side, the control layout is sensible and everything is easily within hand's reach.

The rear seats, though, still suffer from the lack of roominess that the old models had as well. There's ample room for two people, but you start to question its validity as a five-seater when you're the middle passenger between two editors who are nearly six feet tall. 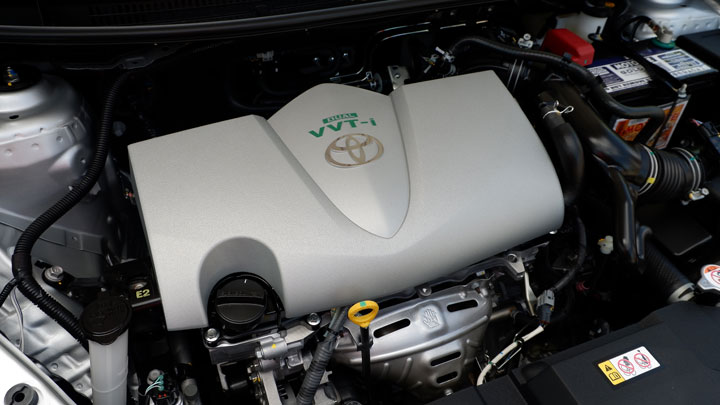 The XE is powered by a 1.3-liter Dual VVT-i with 98hp and 123Nm on tap. On flat roads, it gives you as much pep as you need and even a little more when your cargo is light. On uphill climbs, though, some might find it to be a bit lacking. That's not to say it won't reach the summit, but it might take a while to get there. It doesn't help that the throttle response can feel dull once the incline changes.

The CVT, which is Toyota's selling point for the XE, isn't the most responsive one we've tried. There's a distinct lag when you try to wring more torque out of the engine, and you find yourself testing the throttle's travel while the revs increase slowly. For city driving, this set-up is fine, but expect a bit of trouble on out-of-town trips with steep inclines. Still, the promise of fuel-efficiency while traversing bumper-to-bumper city gridlock is there, thanks to the small-displacement engine and CVT combo. 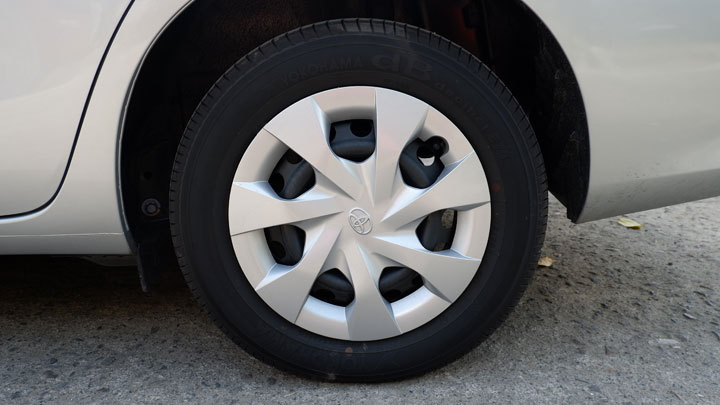 Perhaps the best part about driving the Vios is its handling. No, it won't take sharp corners with abandon nor will the suspension allow you to do massive jumps unscathed. In fact, the sedate handling will hardly even get a rise out of you. For a daily driver subcompact, though, that's exactly what you want. The steering wheel is a little on the large side for the segment, and it turns with a smooth, unbothered momentum. It's just right.

The ride, meanwhile, is plusher than you'd expect. It would've been better though if Toyota's engineers had raised the front bumper an inch or two. The car can scale speed bumps easily enough, but anything that involves a drop that's any steeper requires some careful maneuvering. 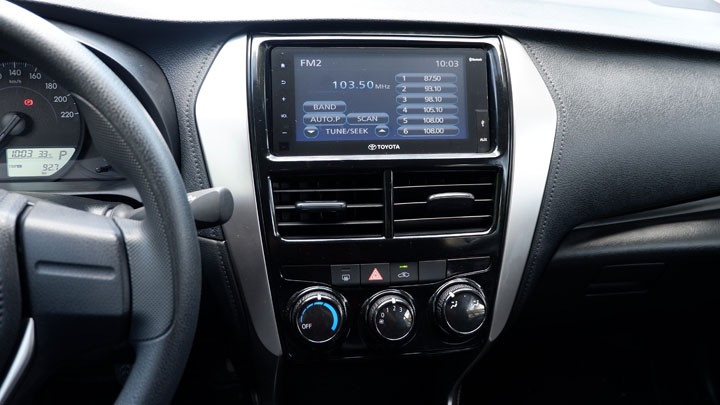 The XE is a bit bare bones when it comes to tech we've come to expect from modern cars. There's no keyless entry, and there are also no controls to adjust the side mirrors from the cabin. But it does feature central locking, seven airbags, and a 7in touchscreen infotainment system with Bluetooth. It's a bit nitpicky, but we weren't too fond of the media system's interface. We couldn't figure out how to change tracks on a Bluetooth-connected device using only the touchscreen. 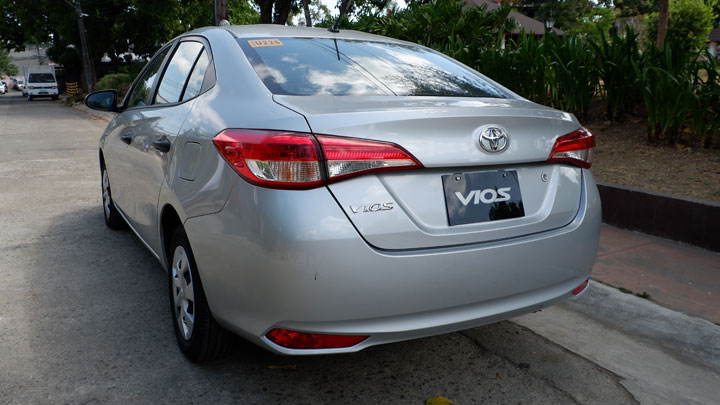 As far as the Vios' prices go, the XE is an affordable variant. But it feels a bit underwhelming when compared to less expensive offerings from other brands looking to make a dent on the Vios' turf. Truth is, the Vios has become pricier.

The trade-off, though, is Toyota's vaunted reliability and resale value—positives that only become evident later on in the ownership cycle. What the XE lacks in amenities, it makes up for in parts availability and the buyer's peace of mind. 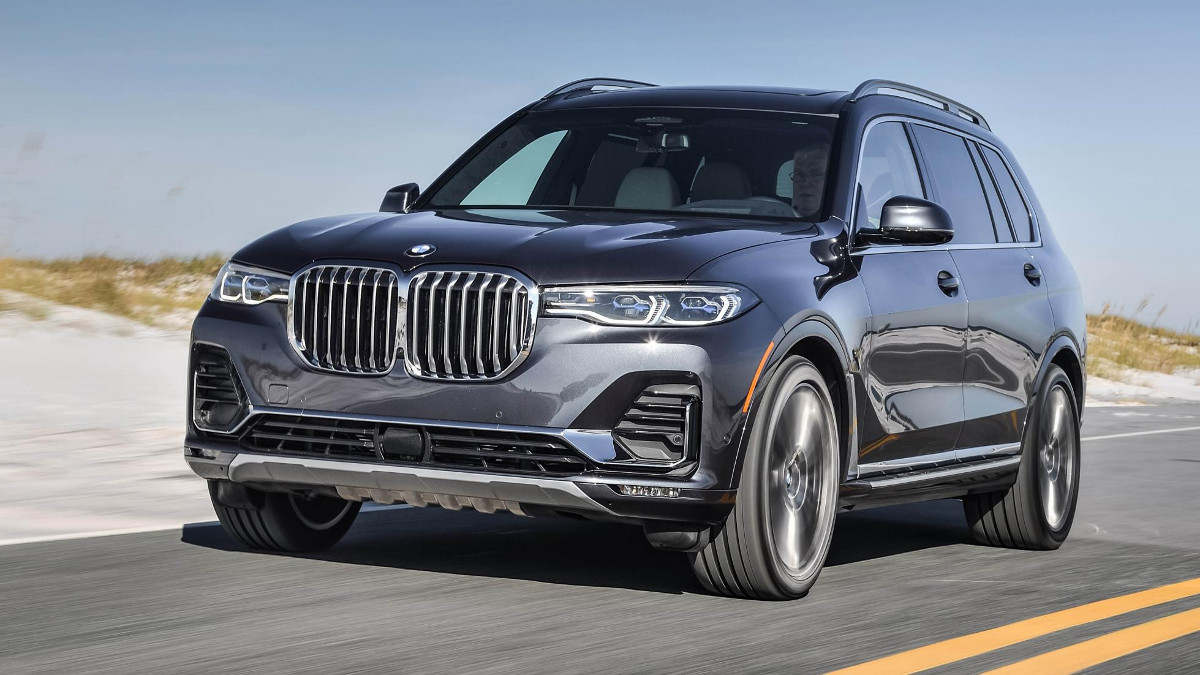